Shin Megami Tensei: Persona 4 is one of the highest ratest games of all-time.  Nearly everyone has heard of the famous Japanese RPG series Persona, and even more so about the 4th installment.  Finally getting a chance to play the game, I picked up Persona 4 Golden on Playstation Vita recently (Thanks a million Seruki Love!).  The game was going brilliantly…until I realized you can form romantic relationships.  This has made me re-analyze my current approach to the game.
After my relationship with the Symphonic Band’s resident trombone player, “Ayane”, went up to “intimate” and she said she was my “girlfriend”, I immediately reverted to my previous save file.  I had to figure out if this was the right move or not.  While I understand you can have multiple girlfriends without it interfering too much with the way the game works (or so my research says), I would really like to save something like that to a second play-through.  What I would like to do right now is figure out which girl I want to be my main girlfriend (and obviously I do not want it to be Ayane) and yet I am stuck between Chie Satonaka, Yukiko Amagi, and Rise Kujikawa.

Relationships are something that I take very seriously, whether it be platonic, romantic, or fictionally digital (like this one).  I want to make sure I make the right choice that I will not regret, and because of that I need to consider the options available to me and what my heart desires.  Not to mention it is a bit strange that all three of the girls whom I currently must decide between also remind me of girls whom I now in real-life (making the decision even harder).
[   Chie Satonaka   ] 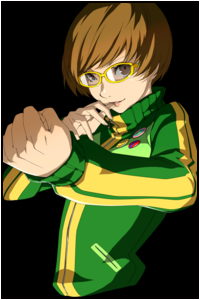 Chie is the one girl who I really knew of from Shin Megami Tensei: Persona 4, even though I had never played the game.  She is a cute girl who has a signature green jacket with various pins, brown hair in a bowl cut, and does not consider herself very feminine.  She loves to eat (mostly meat), and is a Kung-Fu movie buff.

Chie appeals to me because she is a tomboy who does not consider herself to be very feminine (at least compared to Yukiko), but she is very much so in her own way.  She is cute and steadfast, she stands up for what she believes in, and is more-or-less the same as other girls on the inside (in wanting to feel adoration for being womanly).  Her cheery disposition hides a lot of pain and insecurities.

The only problem is that I feel like Chie would never be assertive within the relationship and she would always wonder if she was feminine enough and if the moves she was making are right (also read as, “what a typical girl would do”).  I feel like her insecurities rest solely in her ability to be what she thinks is feminine, and therefore wonders if she is “good enough”.  I feel like what a lot of love and affection over time this could potentially change, but I feel deep down she will think she is inferior to more “traditional” women, and might end up being the jealous type. 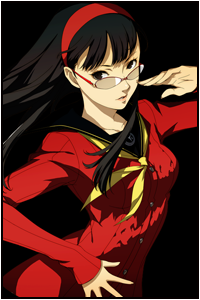 Yukiko was a girl whom I thought was going to be completely stuck-up and arrogant; someone who fit the stereotypical “good-looking, rich, know-it-all who flaunts her assets”.  However, this was not the case as Yukiko turns out to be someone who is extremely kind-hearted and caring.  She carries a massive burden which she wishes to escape from, yet she has lived her whole life feeling like she has no choice but to shoulder them for the good of everyone.

Yukiko appeals to me because her inside matches her outside, beauty for beauty.  You barely find characters who are this perfect, she simply exists as someone who is too good to be true.  She has a winning personality, beautiful appearance, and she is intelligent to boot.  It makes sense why she is fawned after and has such a high reputation; the proof is definitely within the pudding.

I feel like Yukiko would make a good girlfriend because she actually is looking for a boyfriend.  She has a lot of amazing features and talents, but the fact that one of her desires is to actually be with someone means she will be able to allow her true feelings to shine through once she meets that special someone.  Also, I am sure she is someone who is very committed and will not let go very easily, working through problems and being perfectly happy in a long-term relationship seems like the natural thing for Yukiko to flourish in.

The biggest problem I feel that Yukiko would have is dependence.  She seems like someone, especially in high pressure situations, to just not say anything.  I feel she would hold back any feelings that would be confrontational if it means keeping the relationship together, even at the cost of her own happiness because she has made up her mind about what her “happiness” should be.  I feel like she may love the idea of being in a relationship and having someone to love more than what it will feel like to be loved herself.  I think she is one of those women who would convince herself that she should bear any hardship because that is what a girlfriend should do.  I feel like getting her to open up about her own emotional turmoil would be the hardest thing to do within the relationship. 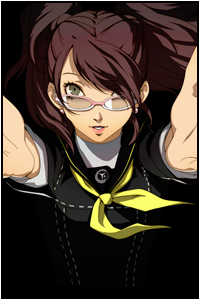 Rise is a star idol, someone whom many adore and fawn over (including Yosuke).  She has taken a break in order to recollect her thoughts, which is why she came to Inaba in the first place.  However, seeing her in person, she is nothing like what a fan would say from her many TV appearances on live shows or commercials.  She is flirty and could be even somewhat of an exhibitionist, but she means well and has a good heart.

I feel like Rise would be a good girlfriend because you would actually feel like she wanted to be with you.  She has no real problem showing affection and giving you a lot of attention, how she treats you is clearly distinguishable from how she treats others, so you always knew that she thinks of you in a special way.  The behavior she exhibits could easily help people with low self-confidence feel their value, because she makes you feel special.  Also, if you are more into the naughty stuff, she seems to definitely be willing to explore those avenues.

The biggest problem I have with Rise is that she seems more-or-less like someone who would be flirtatious with anyone who caught her eye.  Monogamy could be something that she will struggle with within a relationship, or at least the “appearance” of it by resisting the urge to show off her assets.  Not to mention she might be a girl who showers all her attention on someone due to an immediate infatuation, which means she could easily transfer all that over to someone else who catches her eye if she ever deems her current interest as “boring”.  She could simply be an easy lover who comes and goes; her love could be very fleeting and leave you empty after getting you hooked. 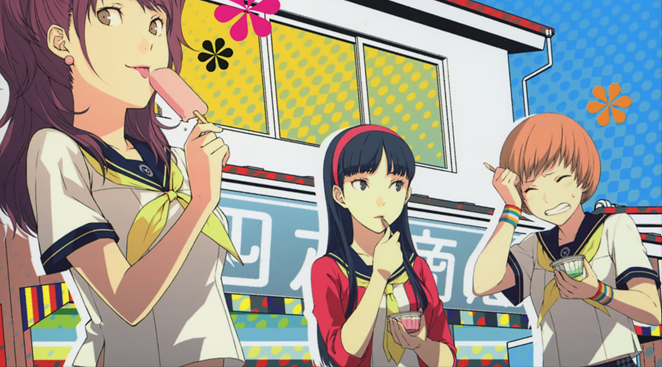 To be honest, I really could not make up my mind between the three girls…so I decided I would date all of them!  Yup, that is exactly right.  The good old fashioned harem approach.

The fact is, every time I thought I was making progress I would tip towards another way.  “I really like Chie, she is down to earth and sweet and unlike the stereotypical girly girl” but then I would switch it up, “I really do love Yukiko.  She is so well mannered and feminine, just what an ideal girlfriend should be”, and yet again I would change my mind, “Rise is really fiery and clearly conveys her feelings.  She is not scared of affection and to show you how much you mean to her, I love aggressive girls!”…it is terrible. Needless to say this was getting me nowhere so I decided to save having one girlfriend for the second play-through.  I will decide what to do once I am in an actual relationship with all of them and see how they are like in that situation.

While I know that two-timing them is wrong, especially since Chie and Yukiko are best friends, I really cannot make up my mind and it is impeding my ability to finish the game!  Hopefully the second time around I will be a lot less indecisive when it comes to picking out a girlfriend for the main character (Yu Narukami).

Thanks a ton for reading!

CAPCOM VS | The Fighting Game We Need