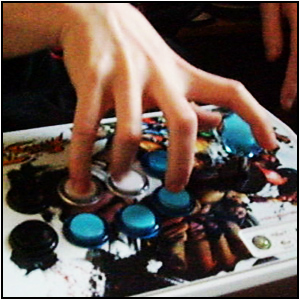 Anyone who is a fan of the Street Fighter IV series, Marvel vs Capcom 3 series, game breaking glitches, or just a lover of high execution combo videos has more than likely heard the name “desk”.
Springing from seemingly nowhere with technical ability that was completely unheard of, performing combos consistently that others relied on programmable controllers to achieve and all the while recording his hands as proof.  Even more so than this, he is a talented musician who has a band, “Project Dolphin”.

In this interview I ask him a few questions to better discover what drives him and exactly who he is.

Hit the jump for the full article!
-[ WHO IS THIS GUY?! ]-
The very first video I saw from desk was his masterful Chun-Li infinite done without Tool-Assist and was inspired by “Sakonoko” (My favorite Cammy White player, so this resonated with me) and I was amazed, thus leading me to begin checking out his other videos because of this.
His videos began popping up on EventHubs, I saw more and more of desk as he began to get more widely known.  Discovering glitches and showing off more of his phenomenal technical ability.  Hearing the music in the background of those videos made me wonder if he had anything on Over Clocked Remix.. (Sadly, I did not find anything).

Well, getting this site underway, I wanted to do a gaming interview and who better to start off than desk?  I got a plethora of other people I also want to interview, but desk is someone I felt helped people break the barrier and show some people are good enough to do what was thought only possible by a machine.

-[ THE INTERVIEW ]-
Accepting my interview, I find from his responses that desk is a very sociable person who keeps his word and actually responded back to my questions! (I am looking at you Kayane).
I wanted to keep this interview as condensed as possible while also covering some things I want to know, as well as what I think the community are more anxious in hearing.  Talking about the origin of his name, why some wonder about why he does not have many tournament showings, why he finds glitches so much better than others, and talking about how we can achieve his level of technical execution.
-[ THOUGHTS ON THE INTERVIEW ]-

Giving this interview helped me understand (Hopefully the fighting game community as well) a deeper look into desk and his origins.  He is actually quite humble and takes thing one day at a time; he is also a phenomenal musician.

Something I was very surprised about was that he did not have a regular training regimen and that the only advice he gave about his technical execution was be a musician first (I played Baritone, Trumpet, Trombone, and Euphonium, no string instruments or piano sadly.), just means I am going to have to take some lessons (Read on one of his videos that Piano and Classic Guitar helps); learning may help me “piano” on my arcade stick better; but it also means that desk’s love for music spills well over gaming and even though he may not say it, it is something of a “gift” to be able to perform things even the top players may sweat at.

With this, it also seems as though desk is confirmed for Evolution 2012 (You heard it here first!) which means I know who to try and avoid in the bracket if I can make it to Evo next year.

I want to thank everyone for viewing this interview, I hope that you learned a bit more about desk and answered some of the questions that remained unanswered about him.

OTHER
In order to keep up with myself and with desk, you can use any of the following mediums below to keep track of our activities.  Thanks!

DARLING in the FRANXX — What Does it Mean to be Human?

8 Replies to “desk: Interview with an Execution God”