1st Episode Impressions is an article series which focuses on the very first episode of any particular anime.  Mainly whether-or-not it is able to grasp my attention from the very beginning due to the way it introduces itself.  Also, it acts as a comparison point for my final review of that anime or season.
I have seen something online about a cute little girl who has been taking over the hearts of otaku everywhere.  In wanting to see more about what this little “daughteru” named Tsumugi was all about, I went ahead and checked out the very first episode of “sweetness and lightning”.  I must say, this series has some potential. 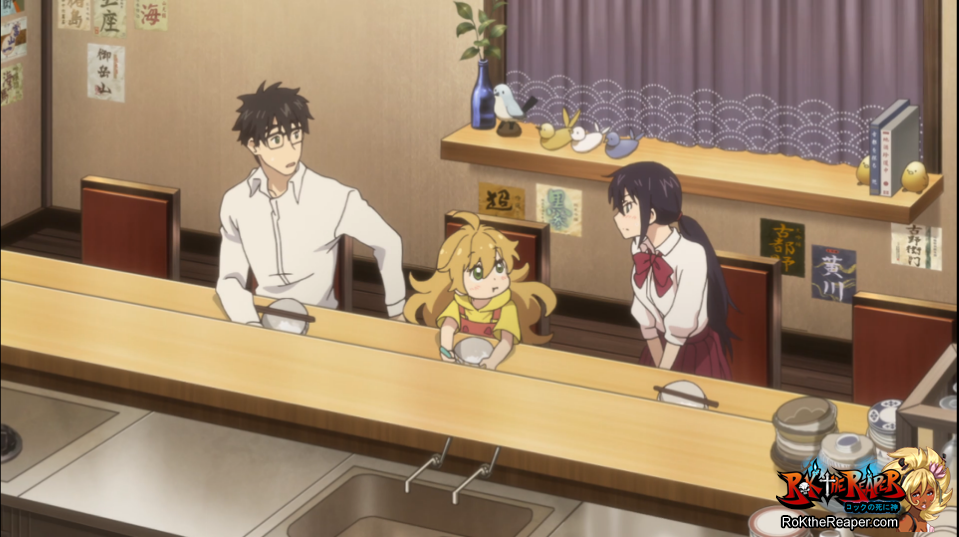 This anime starts off with a typical scene of Tsumugi waking up her father, Kouhei.  Just from the introduction at the very beginning, we can deduce that the father and daughter Inuzuka pair are the center of this anime.  It is easy enough to tell that Kouhei is a single father and that he is looking after Tsumugi by himself without a female companion around (neither girlfriend nor wife).  Tsumugi is old enough to be in school, but not old enough to walk home.  Also, Kouhei appears to be a teacher who sometimes is required to work long hours, so he actually hires someone to make sure Tsumugi gets home safely.
Tsumugi appears to be a girl who is carefree and acts like any other child her age.  While her father shares the stage with her, it appears that the anime will be centered more-or-less around her whims and antics.  She seems to love anime (specifically a show called “Magi-Girl”) and her parent, Kouhei.  She also seems to be used to helping her father around the house and cooperating with him on whatever he asks.  It is also apparent that she does not know that her mother died, that or she simply believes that she will come back one day; more on this later, however.
Kouhei is a teacher at a school, and he appears energetic and spry whenever Tsumugi is around.  Nonetheless, we see bits and pieces of sorrow and somber within his persona whenever he is left alone with his thoughts, or something he sees triggers a memory of his dead wife.  A good example of this is how he immediately took his daughter to a restaurant after Tsumugi mentioned that he should write a letter to her and say to cook them some “yummy meat”.  The fact that Tsumugi said to “write a letter” proves that he might have said, “your mother is going away for a bit” or something along those lines so she would not have to deal with the harsh reality that her other is no longer with them.  Despite this sadness lurking within his heart, it appears he is trying to do the best he can in front of his daughter to make sure she grows up happy and healthy without being burdened by him.
Next up we have another person, Kotori Iida, who appears when the father and daughter pair are cherry blossom viewing in a park.  While she initially appears to be some random person whom Tsumugi and Kohei run into that just so happens to give them a business card for her mother’s restaurant, it becomes more apparent that she actually knows them; well, him to be more specific.  She is part of the school where he teaches, and he is her assistant in Class 1-A.  I believe that Kotori is wearing a school uniform, so I have no idea whether-or-not she is actually a teacher at the school whom he helps to assist, or if she is simply a student who knows of him.  It makes more sense if she is a student because you would figure that faculty would know each other very well.  However, why would someone be her assistant if they were just a normal student?
I believe this episode shows a conflict (mostly in the cliffhanger), that will prove different for both Kouhei and Tsumugi.  Kotori seems to have, in some ways, taken a liking to Kouhei or has always had a crush for him one way or the other; that and she could just be a good-hearted person who wants to help out someone whom may need it.  This, over time, could build romantic interest or involvement which could make Kouhei question whether-or-not he should or can move on to another relationship (as it has only been 6 months since his wife has passed).  Also, if Tsumugi does not know the truth, she will want to know why he is getting chummy with some other person rather than his mom.  It is an interesting scenario to say the least.
Overall, sweetness and lightning has given me enough goodness to keep me around for the long haul.  I think it might be a series that really address real life situations and have children and adults deal with the passing of a loved one that are supposed to fill a vital role in their lives.
SHARE:
RATE: