1st Episode Impressions is an article series which focuses on the very first episode of any particular anime.  Mainly whether-or-not it is able to grasp my attention from the very beginning due to the way it introduces itself.  Also, it acts as a comparison point for my final review of that anime or season.
After hearing so much good about an anime called “Re:ZERO -Starting Life in Another World-“, I figured that it might actually be a good idea to start watching it.  After taking the plunge and watching the first 50 minute episode (episode 1A and 1B), I am ready to give my first impression of the series!
Re:ZERO -Starting Life in Another World- 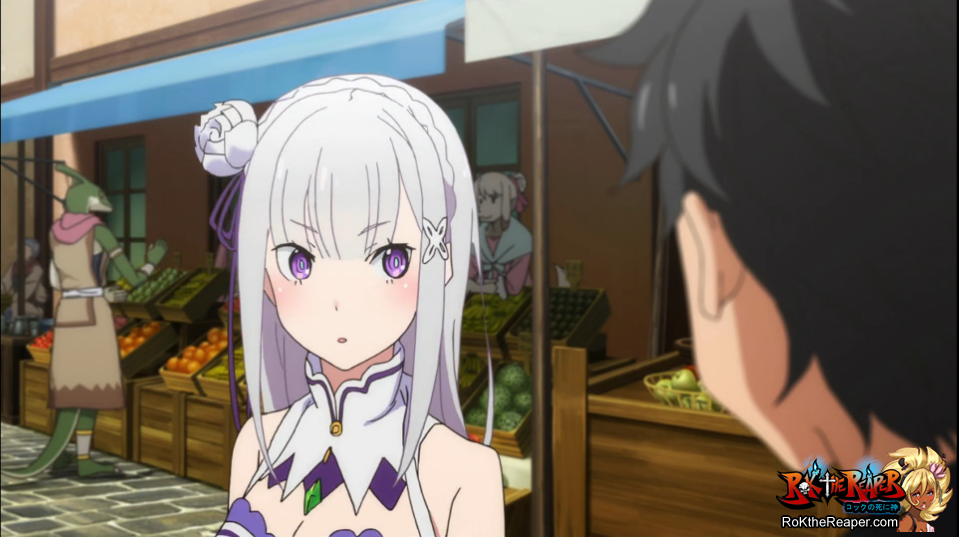 This anime series is peculiar in the way it lists its first episode, mainly because they are labeled “Episode 1A” and “Episode 1B”.  It does not make a lot of sense at first and you may wonder why they have two episodes with different labeling if it focuses only on one character, but because of the events that happen in Episode 1A, you can basically think of it as an alternative ending.
This anime begins in a typical fashion of a boy being transported to an alternate world out of nowhere, having no idea how he got there with no clue what to do now that he is there.  However, unlike most anime where people are panicking after finding themselves within an alternate world (Outbreak Company, Log Horizon, etc.), Natsuki Subaru seems to understand what is going on and is actually thrilled.  The experience does not pander out the way he would have thought, with him having no apparent special abilities and not being summoned by a cute girl who recognized his “potential” and needed his help.
You come to meet what appears to be some of the main characters not too long after he gets there.  A spirit named Puck and its user named Satella, as well as a thief named Felt.  In typical fashion, Subaru finds himself saved from thugs by the hand of Satella and agrees to help her look for what was stolen by Felt, a thief who happened to pass him by earlier in the alleyway as he was getting manhandled by a band of rogues.  Upon finding out where her pendant is, he walks upon a terrible scene of the man who ran the loot exchange shop within the slums murdered in a pool of his own blood.  Not a second later, after finding the body, a mysterious voice says that he will have to be dealt with and before long, Subaru finds himself and Satella dying, similar to the scene which appeared within the first seconds of the episode.  This is where the plot twist kicks in.
This anime seems to be about time travel in a way, more-or-less like a “checkpoint” type of system that kicks in when Subaru is on the verge of death; very typical to something you would expect of someone who is heavily invested in video games.  It appears as though Subaru is able to go back and change events as they happen, resulting in a different outcome from the one he has previously experienced, mainly because he is going to know what is happening before it actually happens.  This is reminiscent of different “paths” within a role-playing game that allows for different endings based upon the decisions that a player chooses to make.  Initially Subaru does not recognize that this is what happens and it takes until the ending of Episode 1B for him to realize that he has been imbued with this.
Something that annoyed me a ton was the fact that he did not realize that things were playing out exactly how they had before.  Meeting the same people within the alleyway, Felt not having already been at the loot exchange place, and no blood anywhere.  While it is entirely feasible he may have been that absent minded, no one would not notice that things are happening exactly as they were before; but maybe not having any interaction from Satella until the very end of Episode 1B caused this realization to kick in late.
From what I can tell, it seems as those who are affiliated with the insignia that Satella is seeking are hated; at least, they are despised and hunted by a people who are out for their blood.  This is also why Satella only probably only trusted Subaru with her name after she realized that he was a gentle spirit, especially since Puck said she sensed “no malice” within him several times.  This is also backed by the fact that she said “I am a half-elf” while anticipating some type of disgust or repercussions, only to receive nothing and be thrown off guard by it.
The main conflict within this series seems to be something similar to Charlotte, where he can reverse time but things are going to continue to happen for the worst because you can only do so much before you have to accept an outcome; right now he has already been killed twice.  I am guessing this power, and whether-or-not he can control it or cause it to kick in when he wants it to will be the origin of much drama and suspense for this series.

I will say that the anime has a very good concept, but the initial episodes did not make me want to keep watching it.  While I know it is apparently going to be a good series and I will stick it out, it did not do much for me in the way of how it was setup.  Depending on how the scene at the loot exchange shop ends, it might sway me a bit more.  For now, I am just going to keep my eyes peeled and see what Re:ZERO -Life in Another World- has to offer me.