The Division greeted us with a trailer for their newest update, “1.2: Conflict”.  This trailer told us about all the new features and the new Incursion that is on its way to The Division, and a new feature that they have named, “Hijack Extraction”.  How they have described it is;

“Dark Zone extractions just became even more intense.  Interrupt ongoing extractions by cutting the rope to have all the loop drop to the ground.  Protect your loot at all costs!”
Excuse me, what?!  This is moronic.  Hit the jump to find out my feelings on the subject and why this is a horrendous move by Ubisoft that may deter players from giving The Division another try even more.
[   Yet Another Stupid Feature   ] 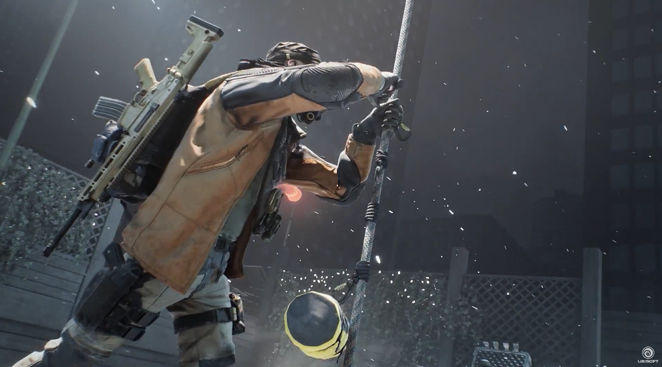 Everyone knows that The Division has been on shaky ice with players ever since it first launched.  From players standing in the doorways and doing jumping-jacks to block new people from being able to enter or exit the first area, to people exploiting respawning bosses to gain access to Phoenix Credits and High-End Gear.  When the first expansion dropped, even more problems came from people finding glitches to easily complete “Falcon Lost”.  Not to mention other problems, such as damage mitigation from elite enemies actually doing the opposite and multiplying the damage, while only submachine guns and marksman rifles remain king as the only viable options…now you introduce an even worse feature on top of that.
Solo players have complained about The Division’s Dark Zone from the beginning.  They were worried about running across four-player bands of high level rogue agents who would gun down anyone with no fear or repercussions (mainly due to the absurdness of the Survivor Link ability coupled with uneven odds from exploiters versus honest players).  Even when me and my group of four were trying to extract or just walking around, we would get attacked by players who were incredibly difficult to take down (even if it was just one versus four), due to the overwhelming advantages of their gear advantages due to taking advantage of The Division’s system vulnerabilities.  However, even with all of the nonsense occurring, we were able to extract some good loot by being able to pop Survivor Link and lasting just long enough for us to get all of our gear onto the helicopter, and it seems that we will not even be saved by that now.
Hijack Extraction means that your gear is not safe until the helicopter pulls off; that even if you are able to place all of your gear onto the rope to leave the Dark Zone, that it can easily be dropped back down to the ground.  This means that the minute and a half you wait for the helicopter now includes the added time it takes for the helicopter to leave, meaning that if you do not have a full group who can put their loot onto the helicopter so it leaves immediately, you are at a massive disadvantage.  Rogue players who pop out of nowhere to ambush agents putting their gear on the line now can still make off with their loot if they manage to kill them after they have secured it; running away with it while the victims must exit the Safe House or a Dark Zone checkpoint to hunt down the ones who cut their line.  This means that those who are geared for the Dark Zone will have an easier time taking things from players, while those who are not built for Player vs Player combat will be even less likely to play the game.  Also, this means that those who have exploited to get themselves at a level above the average player have gained that much more of an edge over honest gamers.  Ridiculous.
Honestly, I have not touched The Division since about a week and a half since their first update dropped which added the very first Incursion.  I do not see myself going back, which is a shame since I had such high hopes for this game years prior to its release.  While many complained over Destiny’s lack of content and repetition and grind, we get that plus game-breaking and advantage shaping exploits with The Division, and I am not about to put up with it.  Honestly, this game had so much promise but the more that Ubisoft attempts to add in new and appealing features, the more things are off putting to players like myself, thankfully I did not buy the season pass.
SHARE:
RATE: