With OVERWATCH fast approaching, I wanted share all the information I have found out during the beta.  I have a handful of characters (Mei, Reaper, Reinhardt, and Zarya) whom I want to share my strategies to success.  These should aid those who want to utilize these characters and give their teams the best shot at winning!

Mei-Ling Zhou is quite lovable.  She is a defensive character who is able to slow people down and really aid the team with her ability to throw up ice walls.  While she might have a hard time killing particular heroes on her own, she is no slouch and by far my favorite OVERWATCH character due to her ability to cripple the enemy team’s strategy.   Learn to love her like I do! 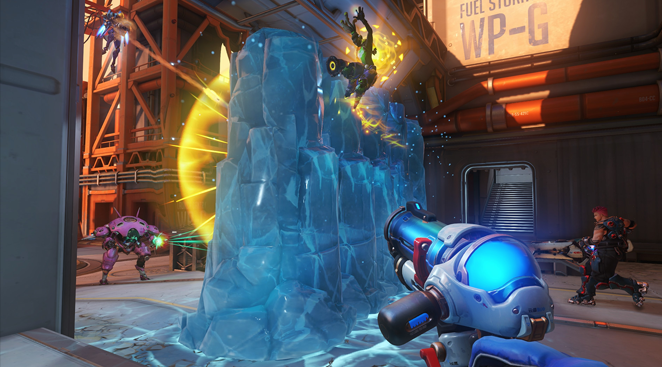 To start with, let me familiarize you with everything available to our sleeping-ice beauty.
Mei-Ling has her standard attack which has two modes of fire, two abilities, and an ultimate.
[   Endothermic Blaster   ]
This sends out a wave of frost which has the ability to slow down opponents hit by it.  The range is hard to tell, so it is something you will get use to in time playing with her.  Concentrated fire on a target makes them freeze in place completely, unable to move or do any action; it should also be known that this mode does very little damage.

Mei’s secondary mode for the Endothermic Blaster sends out an icicle-like projectile, dealing decent damage for headshots but is difficult to pull off since it is a charged shot which requires some prediction to land (best used against froze opponents and mid-range fighting)

[   Ice Wall   ]
This ability allows Mei to put up a giant wall in front of opponents, and it also has two modes; placing the wall horizontal or vertical.  This is good for cutting off support characters from the rest of their team, saving teammates from attacks, and blocking off entry ways into objective or passageways from pursuers.

[   Cryo-Freeze   ]
Mei incases herself within a solid piece of ice (reminiscent of her story).  While within Cryo-Freeze she is able to gain health and become invulnerable to any damage for a short period of time.  Especially useful for avoiding character’s ultimate ability which would be impossible to get away from otherwise, avoiding attacks that have the potential to kill you, and surviving multiple encounters situations long enough for your Ice Wall ability to recharge so you can run to safety and wall yourself off.

[   Blizzard   ]
The weather modification drone that she uses on her bath is thrown forward, sprinkling an area-of-effect snow blizzard which mimics the effect of her Endothermic Blaster.  Best used to safe yourself from crazy situations in combination with Cryo-Freeze and when a teammate has an ultimate ready to go which has the ability to kill multiple enemies (such as McCree, Pharah, and Reaper).
[   Mei the Winter Soldier  ] 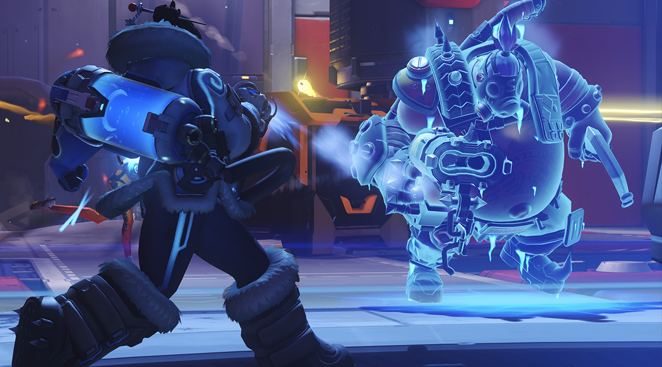 Mei-Ling Zhou’s general strategy is to be as annoying as possible to the other team.  She is classed as a defensive character, and that is her primary function, defending.  However, she is not someone like Bastion who is meant to be a powerful aggro deterrent, she is meant to be a crippling force that is a constant thorn within the side of the enemy team.  While Mei has a tough time getting “Play of the Game” because she does not have very high killing potential, she is an assist monster who can greatly add in dismantling key enemies’ ability to utilize their plan of attack and stop their supports.  As Mei you want to do two things; stop their key members from advancing (mostly their attackers) and cut off their supports.  A tertiary function is protecting allies from harm.
Before I even begin, you need to know as Mei that you really need the support of your team to be effective.  A lot of the moves you have (Endothermic Blaster, Blizzard) are better used in combination with the killing potential of teammates.  Unless you are very good at using her secondary fire function, going off without your team can end disastrous.  However, Mei’s Cryo-Freeze ability can restore life, meaning that you do not have to rely on a healer or looking around for health most of the time.  A Mei who learns how to use the Ice Wall ability and Cryo-Freeze ability tactically can cut themselves off from opposing danger and stay in the fray by keeping their health up.  Now, on to strategies.
You want to first focus on stopping the opposing team’s key members from advancing; this is mostly any offensive heroes who are pushing up, as well as Tanks who attempt to distract your team and drive them back.  Your Endothermic Blaster is perfect for stopping Reinhardt’s who are using their shields, Tracer’s who are zipping all over the place, and slowing Reaper’s in their tracks who have teleported and trying to flank.  Even if their team is bunched up and pushing from a distance, you are able to wall them off to momentarily halt them to think up a counter strategy, even do things like make Bastion’s turret, Widowmaker’s sniping, or even D.VA’s ultimate completely worthless.  If you are able to fight solo without the help of teammates, you can make things even worse by going behind enemy lines and drawing their attention away from the main fight; continuously freezing opponents and walling yourself off (making it where they are worried about you returning shortly because you are not far away and you certainly are not dead).  This is the most annoying part about Mei and she can easily frustrate, separate, and neuter the opposition.
The next thing you really want to focus on is cutting off their supports.  Pressure is put on by the opposite team due to the Offensive and Tank characters, but their true power comes from syncing up with support characters.  They are the silent characters who hang in the back and make everyone else so much harder to deal with, they are the backbone of the entire team and can easily be the difference between mediocrity and greatness. Your job as Mei is to separate them from the rest of the group whenever safely possible.  Using your Ice Wall to stop Mercy’s beam from healing that Reinhardt, freezing that Zenyatta so he cannot dismantle your team with Orb of Discords, and slowing down Lucio when he tries to speed away.  You are to cut off these people and make their lives an absolute living hell, and by association, the rest of their team.
Your third and final action is to protect your team.  I personally feel that Mei has the ability to save the team from damaging attacks and ultimates better than even Reinhardt’s shield.  A well place wall can block minimize damage done.  Endothermic Blaster can easily give your teammate the edge when fighting in a losing situation, or you can save the entire team from an offensive push by freezing the other team solid with Blizzard.  It is even possible to wall off enemies attempting to pursue a fleeing teammate into a building and allow them to successfully escape.

Whenever possible, you should use your ability to mitigate damage and save lives. 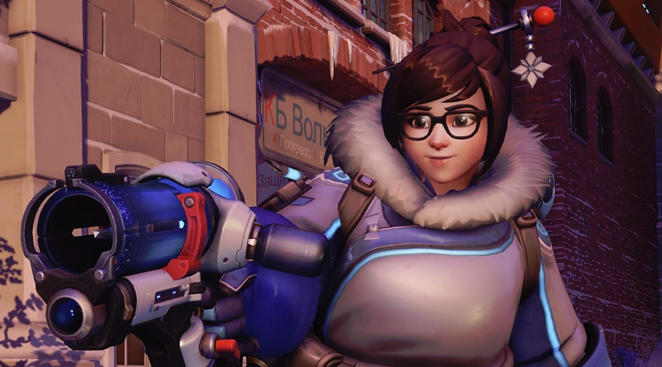 Ultimately Mei-Ling is my go to character and who I normally start off the game with.  She is a character I can see being a very real threat since she is able to successfully cause a genuine headache to whatever team she is up against by dismantling their ability to play the game their way.  Able to go behind enemy lines and have a high survivability rate while doing so(due to Ice Wall and Cryo-Freeze) is a massive advantage.  True, her killing potential is not as great as many of the other characters, but she is better at setting up killing opportunities for her teammates more than any other character in the game.  In the right hands, she can nearly single-handedly cripple the biggest assets of an opponent’s force and make them rethink their approach.
Hope this helped!
SHARE:
RATE: