Cammy White is my waifu, as you all should know.  I have the bishoujo series statue of her by Kotobukiya and I have played her as my main character in every fighting game she has appeared, and it proves no different for Street Fighter V.

After playing her for a good while, and right now standing in the “Super Silver” rank, I want to give you guys my impressions on her during this month and a half of release time.  Did my leotard wearing Goddess hold up to my expectations?  You will have to read to find out! 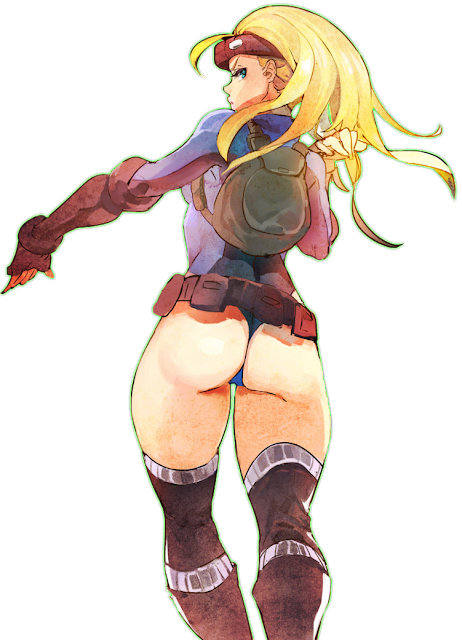 Let me first start this off by complimenting them on Cammy’s look in this game.  She started off very strange looking in her first appearance in Street Fighter V’s trailers.  Over time, the Japanese community actually commented about how she was not cute enough, and she ended up getting a makeover which greatly improved her facial aesthetics (I cannot say the same about Ken Masters though…).  Not only that, but in game you can tell that they have made her more feminine in shape despite her muscular physique, such as larger thighs and a more rounded derriere.  Not to mention her alternate “Battle Costume”, which should be available for purchase with “zenny” in the Street Fighter V store at some point.  I pre-ordered the game from Best Buy electronics store specifically to be able to play her in this.  I feel that it is currently the best costume in the game for any character currently, and is one of the best costumes that Cammy has ever worn (second only to her Shadoloo “Killer Bee” costume).  While this does not directly affect her gameplay in anyway, it is nice to be able to play with my favorite Street Fighter character in attire I think is cool to see.  Now, on to the more technical side.

Cammy actually pretty good in Street Fighter V, currently sitting in the 6th spot on Eventhubs character ranking for the game.  She is typically a very “rush down” heavy character, meaning that she is an offensive character who smothers the opponent in attacks in an effort to quickly take down their health bar.  Females within the Street Fighter universe typically have less health than their male counterparts, but they have more mobility and are typically faster in order to make up for their lack of ability to take a blow.  Cammy has quite a few mobility options which aid her in her rush down viability.  She has Axel Spin Knuckle as her V-Skill, which is able to go through fireballs; she has her Hooligan Combination, which can be split into three separate attacks for mix-up potential while covering a lot of range; and her Spiral Arrow covers quite a large distance (in and out of V-Trigger).  Not only this, but she has quite a few frame traps (standing medium punch to crouching medium punch, for example) which is able to force those who know about the frame trap to block and possibility get hit with a mix-up or a grab attempt bait, while simultaneously punishing those who do not respect the frame trap.

Cammy, despite being rush down heavy, has her weaknesses.  Cammy has to mix things up by going for grabs and punishing those who are baited for grabs heavily.  This is mainly because, unlike some others characters, Ms. White does not have an overhead or a command grab, meaning that the opponent only has to worry about crouch blocking and looking to tech throws while respecting frame traps, so you have to get creative in your approach and make your opponent “think”.  Not to mention, you could be doing good the entire match and get caught in one bad combo and your life is now even with your opponent; while Cammy is an offensive beast, she is also made of glass.  That is why characters like Rainbow Mika and Zangief, close-ranged characters who are designed to take punishment and make up for it by heavy damage gains, can prove to be such a burden for her.

Online with her, I have been doing extremely well and have landed myself as high as “Ultra Silver”, though right now I am sitting very comfortably in the “Super Silver” bracket of players.  I have more than a few rage quits, which I have kept on my YouTube account, but those only fuel me more and let me know I am doing right by my character.  I am hoping to currently close the gaps in my offensive pressure by learning more mix-ups and switching up my approaches and reactions to be less predictable, as well as closing holes in my defensive game by learning new ways to punish annoying moves and setups.

Overall, I am really feeling Cammy White in this iteration of the Street Fighter franchise.  She retains all of her personality from previous games, she has good movement, and she is an offensive machine.  While she lacks anything to really make your opponent stop holding down-back, she is still capable within the right hands and can literally make your opponent feel like they will get punished for anything that they do.  She is not for everyone, and most people who do not bait attempts will not be able to utilize her effectively, she is more than capable of holding her own within the right hands.  I just hope as time goes forward I can get better at using her and become more well-known, such as my favorite players K-Brad and Kazunoko.