JoJo’s Bizarre Adventure has been one serious that has continuously gotten better as time goes on.  I have loved all three parts that have been animated so far: Phantom Blood, Battle Tendency, and Stardust Crusaders.  We are now approaching the fourth part to the series, “Diamond is Unbreakable” which is schedule to release in April of this year (2016).  After the incredible ending to the third iteration to the series, one can only be optimistic of the future.

For further thoughts on why I am hoped for Diamond is Unbreakable, as well as the official PV for it, make sure you check out the entirety of the article.

This trailer displays the protagonist, Josuke Higashikata and his stand Crazy Diamond.  Josuke is the illegitimate son of Joseph Joestar, making him Jotaro’ s Uncle.  Also shown within the PV, Josuke has the ability to return objects back to their original state(which is what he was doing with the sheet of paper) through the use of Crazy Diamond’s stand power.
To be honest, I am really loving the animation quality that they have given Diamond Is Unbreakable, and I love how colorful everything is in usual JoJo’s Bizarre Adventure fashion.  The only worry I am worrying about is the simple coloring style combined with the new simplified art style.  However, I am sure that in time I will grow use to it.  Looks great so far. 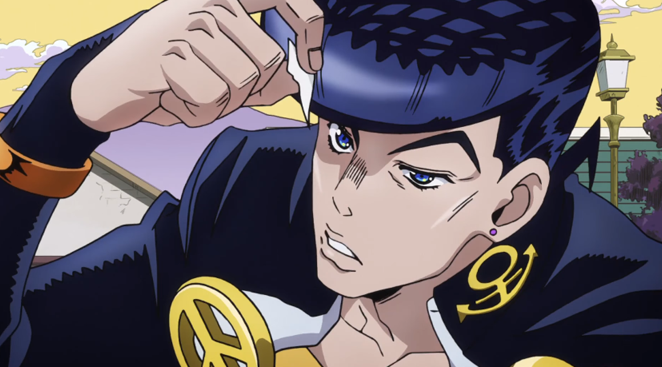 There have not been very many anime I would consider very “Shonen”, at least within the ways of old.  JoJo’s Bizarre Adventure gave me the feeling of life-or-death and bromance which you cannot find in many of today’s common anime.  It felt like a “man’s” anime.  With that being said, going into part four of this legendary series is filling me up with hype as well as concern.
The hype from this serious comes from the fact that all three current iterations of JoJo’s Bizarre Adventure have been handled extremely well.  The same company responsible for the animation of all three (David Production) will be undertaking the job as animators once again; this means that the quality that we have grown to love from this serious will be returning once again.
The only thing that worries and concerns me is the art style itself.  Hirohiko Araki switched his art style during this arc, meaning that all characters will have a different feel from the previous iterations.  Not only that, but the previous three anime arc adaptions were directed by both Naokatsu Tsuda and Kenichi Suzuki.  However, for this version Kenichi has been left out and was replaced by Toshiyuki Kato and Yuuta Takamura.  I have no idea what type of weight this will have over how the plot is told and the characters are portrayed, but I am hoping it will be for the best.
Despite some of the small things I am worried about, I feel like Diamond is Unbreakable will live up to the name that the previous three installments set it up for.  With so many people eagerly watching and waiting after the overwhelming positive view on Stardust Crusaders, there is no doubt that part four will be one of the most watched anime of the season, hands down.
SHARE:
RATE: