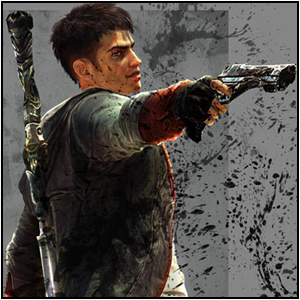 The announcement of a revamped Devil May Cry without the original story and original look of the main protagonist caused an uproar (I should know, I was part of it).  However, Ninja Theory has been constantly improving the game and showing it off whenever possible in order to gain back the support and belief of loyal fans of the series, yet it still faces many negative reviews on the cosmetic changes alone.

A demo for DmC: Devil May Cry is set to go live on the Xbox 360 and Playstation 3 for download six days from now on November 20th.  This article is going to explain to you why I believe CAPCOM and Ninja Theory are putting out this demo, and why I believe it is an equivalent of an all-or-nothing gamble that could very well make or break this game.

Why We Are Getting a Demo

Before we get to the matter at hand, I want to make sure everyone knows what I am talking about.  If you do not know about the initial controversy that is still surrounding this iteration of the Devil May Cry franchise, please visit my  DmC: Devil May Cry Current Analysis & Impressions article and read it in its entirety (Or if you find it too lengthy you may just read the sections I titled “First Trailer, First Despair” and “More Fuel for the Doubt Fire”).  I believe these things will clear up any questions you may have about what I am talking about should you not understand.

I think CAPCOM is greatly concerned on the state of DmC: Devil May Cry and are looking to solidify that it is a worthy addition to the Devil May Cry series.  I believe this demo is their way of showing off its massive improvements to the public in a way that will halt any negativity that is still oppressing it.  Many fans (Including me at first) are upset about how “New Dante” and “New Vergil” look in comparison to previous games, also the fact we do not have Lady nor Trish (At least revealed yet).

Up to this point we have had plenty of information that has been poured to us and trailers showing us what we will eventually be getting, but I do not think that was enough.  CAPCOM knows that criticism can be silenced by actually getting your hands on the product and letting it speak for itself.  I have heard much acclaim for this game’s combat system, and this is where I believe the main focus of the demo will be (Just like Platinum Games and Sega’s “Bayonetta“) versus the trailers which are mostly story and level progression.  I believe the plan is to draw the player deep into the fluid fighting in order to make them want more, probably ending the demo right before a boss fight or at a climatic cliffhanger in order to produce suspense and the feeling of wanting continuation.

Why This is a Gamble

CAPCOM and Ninja Theory are hoping to bring in die hard fans who are still completely against the thought of Dante and the storyline of Devil May Cry being anything else than what they are accustomed to, those who are currently indecisive about their purchasing this game, and those who have not thought one way or the other and chose simply to ignore the new DmC.  As I have said before, a demo is the ultimate solution to show off what the game is capable of, but it could very well end up doing more harm than good.  Let me talk about the “best case” scenario before talking about the “worst case” scenario.

Best case scenario for this game is that it satisfies the needs of the people who are willing to give this game a chance and satisfy those who would see it fail.  People who do not like anything about the demo will undoubtedly play it because it is free and it never hurts to try, and though they may not change their mind out of false loyalty or even “pride” (If they say the game is going to suck and they will not buy it, sometimes they will want to change their mind but will not do it because of how much they have blabbered already) they will stop dogging the game so much and have a noticeably different approach when the subject is brought up again; though they could always suck up their pride and go out and buy the game and everything will be all well and dandy.

Worst case scenario is that this demo will be the incarnation of everyone’s hopes and fears and spell a flop of the game for CAPCOM and Ninja Theory and a huge disappointment for the rest of us.  Moreover, those who were on the fence will decide not to buy the game, those who thought the game was looking very good and already pre-ordered and paid off their game will undoubtedly cancel, and all fans will unite in another uproar saying they want a “real” Devil May Cry 5 and CAPCOM will feel the full backlash and Ninja Theory will lose any remaining credibility they have as good developers.  Even if they release a demo that is more of a beta than an actual final product and the final game is leagues above where this demo shows, the fact that no one will buy it based off of the demo because their minds are already made up will seal the majority of its selling potential.  I say that they have a lot more to lose than they have to gain here, though both are pretty significant.

This game’s success will result in an ultimate victory because of the scrutiny it faced early within its life cycle, but a fail will be easily acceptable and is expected by a large portion of the Devil May Cry fan base.  I am excited to play the demo but very frightful in the same instance.  If it is not good then the game I am looking forward to the most in 2013 will regretfully move to my “Do Not Buy” list, while it only solidifies my expectations if it is good.

All-in-all, this is CAPCOM’s and Ninja Theory’s final resort in order to getting everyone convinced that DmC: Devil May Cry is worth their hard-earned cash and that the protagonist is worthy of the name “Dante, Son of Sparda”, and that the series is worthy of the name “Devil May Cry“.  Either way I am anxiously awaiting the 20th and you can expect a full review of the demo.

2 Replies to “The DmC: Devil May Cry Demo Could Be an “All or Nothing” Gamble”