Trials of Osiris is Destiny’s “end game” Player vs Player game mode.  The objective in this mode is to obtain nine straight victories and make your way to “The Lighthouse” on Mercury, a place which holds weapons with power equivalent to the hard version of the “King’s Fall” raid.
Now that Brother Vance has returned the tournament to us after the release of Destiny: The Taken King and fixing of the Nightstalker Hunter’s Shadow Shot Glitch, I have played it and have a few impressions as to how it is this time around.
[  Current Impressions  ]
My current impressions for Trials of Osiris is that it is much more forgiving this time around.  The previous season of Trials of Osiris before the release of The Taken King was all about Thorn, The Last Sword, and snipers with the “final round” perk active (before the patch which changed the way Final Round works on snipers was implemented).  Thorn would destroy you in one headshot and a body shot due to its potent poison, buffing the weapon previously had made it overpowered; The Last Sword was much too accurate aiming down the sights, its original use with the perks and fast firing ability was to mimic old western hip firing; and final round snipers meant that you had 1 shot kills in the body whenever you wanted, especially in those snipers that only had 3 rounds in a magazine.
In the second season of Trials of Osiris, we are currently dealing with incredible pulse rifles, luck in the chamber snipers (and better snipers in general), but that is honestly about it.  Pulse rifles can kill you in two quick headshots since you will be taking damage from at least 3 bullets as precision hits, mainly because people use low impact pulse rifles with great stability (such as Nirwen’s Mercy from the previous Iron Banner Tournament).  Also, snipers like “Thousand Yard Stare” have become popular because of its aim assist and ease of use while maintaining high impact, and Eirene RR4 for having the highest sniper impact in the game outside of the exotic “Black Spindle” while also having the perk for “Luck in the Chamber”; mimicking the one-shot-to-the-body kill ability that final round snipers possessed in the previous Trials of Osiris season.
Having to deal with these things means that getting in close is not exactly the best idea, especially since we do not have many shotguns that can kill from ridiculous range as we saw before The Taken King’s release (such as Matador 64, Felwinter’s Lie, Party Crasher, etc.), while we do still have some (such as The Conspiracy and The Chaperone), they are a lot more random since we no longer have the ability to re-roll perks on guns as long as we have weapon parts.  This however, does not mean that the existing shotguns do not pose an existing problem, I have died a lot from Invective and The Conspiracy, but they seem fairer this time around compared to last season.  Fighting from afar or strategically moving from cover-to-cover in order to close the distance seems to be the best idea.
[  Mounting Frustrations  ] 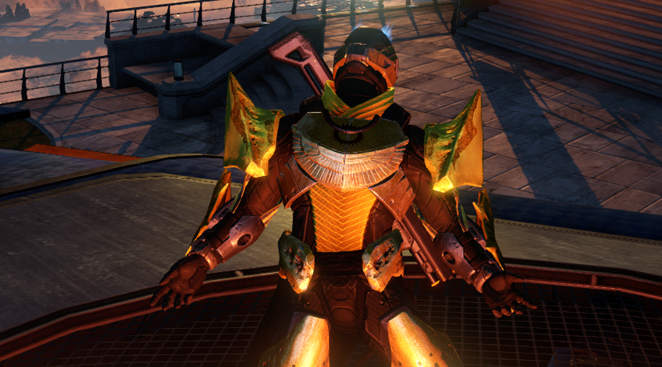 The team I run with “Those Who Hunt Darkness” has been unable to make it to The Lighthouse since it was first announced and implemented back before The Taken King’s release.  The team consist of myself (Titan), RaS (Warlock), and Fury (Hunter).  Currently for the second season I am running Striker, RaS is running Stormbringer, and Fury is running Nightstalker.  Even with the more lenient experience provided by not having to deal with Thorn, The Last Sword, and final round snipers, we are still falling short of taking it all the way and claiming the “ultimate victory”.  This has to do with a wide variety of factors in season 2, but mostly individual nuances that each of me and my teammates possess which need to be addressed.  However, even with talking about them, it is undoubtedly going to be a hindrance for quite some time.
Myself.  I have very bad communication when it comes to saying where enemies are, if I have engaged them or not, and exactly what is going on with me and the general area where I am.  I act as the flank for the group and move independently of both RaS and Fury.  The reason of this is because I am the most combat savvy and have the most spatial awareness, not to mention I do not panic under pressure and can make complex fighting decisions by processing what is the “best thing to do” without becoming flustered.  By me not communicating what I see and what my teammates should probably be doing, I am missing out on important opportunities and essentially letting them go in blind when they do not have to.  Also, I have pretty much took on the role as active leader to an extent.  I say what to do in certain situations and my teammates follow without reproach, so I need to step up and do a better job of saying what is going on to save us vital matches and to allow them to focus more on just fighting.
Fury is the Hunter of the group.  While he generally is the very last one alive, he is simply too defensive in a three versus three setting.  A lot of time he panics and gets flustered when he is against multiple enemies and hardly ever has the ability to clutch a match from those odds (I am the most likely to do so).  Also, he tends not to back-up teammates in pivotal situations because he prioritizes staying alive more than fighting.  This often makes situations where he and an enemy are the only one alive into instances where the opponent revives both of his teammates, turning it into a nigh impossible three versus one match.  I cannot fault him for his mindset because it has saved us more than a few times in PvE situations when going up against the A.I. in Destiny, but it is more of a negative than a positive when engaging in PvP.  I also understand how the habit may have formed since RaS usually died first in every single Trials match within the first 15 seconds or so.   Fury will have to learn how to become more aggressive and give proper support to RaS since they are moving in a two man cell.  This will make situations a lot easier to manage and stop situations from going from bad to worse.
RaS has started to work on one of his main problems, which is dying very early into the match.  By him not doing it, it has forced Fury not to survive in three versus one situations until I can flank or make it back around to help him, and also to stop putting Fury on the spot to attempt to revive RaS in terrible situations.  It has also aided to our overall effort as a team to keep everyone alive until I can manage to do my job.  The biggest issue with RaS this season is his moodiness and how his mentality affects how he plays in real-time.  If he thinks we are doing remarkably well, he may end up getting too cocky and playing too recklessly which means making bad decisions and him dying when he has no reason too.  If we are doing poor, then he yields to his mindset and ultimately the match becomes unwinnable because he has already accepted the fact that we have lost.  Even this past weekend when we were doing well in Trials on the stage “Firebase Delphi”, and on the final day we had a real chance to possibly go 9-0, RaS did not play because of his mood.  If he fixes this, he will be on par with the best of them…but only if he fixes it.
Hopefully me and my team can fix our individual issues and come to be a team that can consistently make it to The Lighthouse using our own playstyle.  I once had an opportunity to go to The Lighthouse when playing with a different team during Season One, however I scrapped the ticket before going because my goal is still to make it there with my team.  Hopefully this  year it becomes a reality.
SHARE:
RATE: