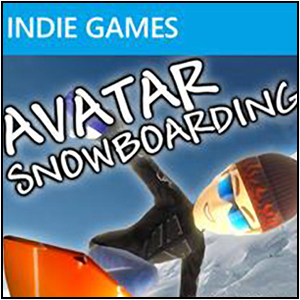 One of my favorite past times as a gamer are the times I would play Snowboard games, they were just so much fun.  The ones that stood out the most to me were Snowboard Kids and 1080 Snowboarding for the Nintendo 64, SSX Tricky for Playstation 2, and as of lately, SSX for the Xbox 360.
Coming upon Avatar Snowboarding, I thought it would be pretty cool if my avatar could snowboard because I did my best to make it look just like me; I love the other snowboarding games but it did not have anything like a “Create-a-Character”, so this was probably going to be as close as it got.
Well, click below for my full review for “Avatar Snowboarding” XBLIG review!

When I headed over to the Xbox Live Marketplace and into the Indie Game category, I select Avatar Snowboarding for download.  The description talked about its breath-taking 3D HDR scenery, awesome3D physics, and that the main goal of the game was simply to make it to the bottom of the mountain.  You can expect to pay 80 Microsoft Points for the 48.12 MB download.
After it finished downloading I started up the game where I was greeted by a few things.  First off, you will see a “SBS” logo which stands for “Squirm Ball Studios”, then you see “Bepu Physics” which I guess is the engine this runs on, then you see a bald-headed avatar guy wearing an Xbox 360 jersey break through the logo and begin to fall before heading to the start screen.  You will see 4 different options available to you: Single Player, Multiplayer, Controls, and Quit Game.
Single Player is just you experiencing the game solo.  Multiplayer is local split-screen with a friend and is the same as Single Player besides that.  Controls is just them telling you how to play the game (No tutorial mode), and Quit Game is just simply them exiting out the game and putting you back to the Xbox 360 Dashboard. 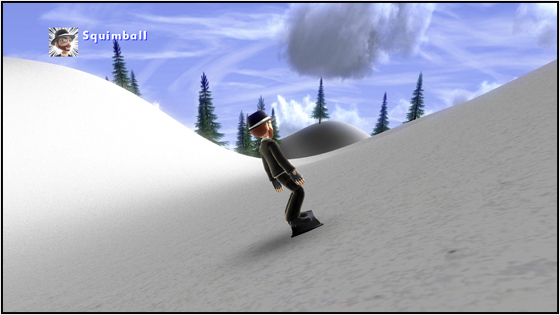 The controls for this game are rather easy actually, and you can see all of this by accessing the “Controls” option from the main menu.  You use Right Trigger and Left Trigger for “Quick Spin Right” and “Quick Spin Left”.  You use Right Bumper and Left Bumper for “Zoom In” and “Zoom Out”.  You will use the Left Stick for “Steering and Twisting” and “Crouching and Extending”, while the Right Stick is reserved for bending of the upper body.  Y will allow you to restart the current level, X will allow you to ditch your board and bail, A is your booster (Which is infinite), and B does absolutely nothing.
All-in-all the control scheme is not bad and is rather simple; it is pretty straight forward (Though, they should have made crouching a push and hold type of thing like they did with the recent SSX game instead of pushing back on the Left Stick), besides that one little tidbit, I have no qualms when it comes to this control scheme.

You should now that Single Player and Multiplayer modes are the very same except for the fact that you are playing split-screen on one and solo on the other.  When you select Single Player or Multiplayer mode you will come to a “Level” selection thing with various numbers and a keypad to put them in; I am guessing this is a random type of generator and writing down these numbers will allow you to emulate a course you may have like, or you can generate a random one by pushing X.  Also to the right is your avatar with your gamertag name above them as they spin in a circle; by selecting your avatar you are able to change what type of board you are on (The patterns and colors change, they are 17 of them).  When you are done selecting the level and your custom board, push start it and it will say “Generating Terrain”.  After you are done generating it will give a cut scene of the mountain and eventually zoom in on you, and this is where the game begins.
From the beginning there are no arrows or indicators telling you the limits or the boundaries of anything, even the proper way to go (You will find yourself going out of bounds a lot and sometimes it is hard to know exactly how to get to where you need to be); I think they would have been much better with some  type of indicators.  The graphics are very lackluster and are nothing to write home about, making me feel like the description of the game just lied to my face.  Also, something I find pretty bad is the turning and general controls in how the game works; the control scheme is simple but your character looks pretty bad trying to turn and crouch; more time should have been dedicated to the basics of the game.

Something else is the infinite booster on the board, which is bad for a variety of reasons.  The first is the fact that you had no thrusters or pipes or anything on the board to emit the type of trail seen when boosting, yet you are still able to do it and it comes from “Thin-Air”, not only that, it grants you enough momentum to continue to fly in the air should you hit a jump and continue to boost or even able to fly completely up in the air until you go out of bounds and bail.

Honestly, the one thing that is even remotely fun about this game is when you bail; your character’s lifeless body twisting and contorting and being slung about is absolutely hilarious and fun to watch (Reminds me heavily of the “Insurance Fraud” mini-game on Saints Row 2).  Even this has a bad side however, sometimes your body looks contorted in the worst way possible (And not even remotely possible) after you have stopped moving, and sometimes even in the air dependent on how you hit the ground or object that caused you to bail.

Overall I think the game play is extremely lacking and is boring.  Not having the ability to do tricks or grinds or even having something like half-pipes in the environment makes this game very stale.

Avatar Snowboarding is not anything at all like what I thought, I cannot even call it a good effort.  It seems like someone learned how to make the basics of a snowboarding game and did not bother to add anything in it and overlooked all of the flaws; even just playing it a few times should have showed him how bad this game was.  I suggest to anyone thinking about buying this game to download the trial and realize