Yuu Otosaka is a student who possesses the ability to take control of anyone within his eye sight for five seconds at-a-time, using it to cheat his way into a prestigious high school and earn the spot of class representative.  Unknowingly to him, his actions are being monitored and soon he is confronted regarding his special ability.  Nao Tomori transfers him to Hoshinoumi Academy as a representative of the student council in order to track down others who also have special abilities to protect them from being experimented on.  However, the power Yuu has is not all it seems to be, and just may be the key to saving the future for others like him!

You can go ahead and hit the jump to check out RoKtheReaper.com’s full anime review for Charlotte!

Charlotte starts off impressively, immediately displaying who the main character is (Yuu Otosaka) and what he is capable of doing.  They show him utilizing his power — which seems borderline useless at first because of their drawback – to make it into a prestigious school in order to live a fulfilling life with minimal effort.
The main plot of the story is introduced within the very first episode, while not the entirety of the story, it leads to what will become the epitome of the entire anime; seeking out those with special powers to save them from the trouble that their powers will cause them if left unchecked.  This premise is very similar to “X-Men”, a comic and cartoon series revolving around people who have special abilities that are being targeted by those who do not have the same.  This is shown even more so by the fact that each school (Xavier’s School for Gifted Youngster and Hoshinoumi Academy) was founded in order to protect those who have superhuman abilities and supernatural powers.  Others are seeking them out to figure out what causes these particular individuals to manifest superhuman abilities in order to harness their powers for themselves or eliminate them as threats to humanity.
It has been discovered in Charlotte that the powers for users disappear during their adolescence (about the time they graduate from high school), so they only need to protect them until they are finished with grade school.   Nao Tomori expresses this agenda to Yuu and practically forces him to help by saying they have the money to provide a better life for himself and his little sister (Ayumi Otosaka).
They introduce the plot and what the main story is about from the very beginning, this is good so they can focus on actually telling how it plays out during the rest of the anime.  Things take deeper turns and goes more in-depth as the anime continually progresses towards its epic conclusion.  They recruit new members and dedicate an episode or so to each of them, making sure that everyone understands why they would be such a help to the ambitions of Hoshinoumi Academy’s student council.
Later within the story they introduce several plot twists; one plot twists which makes you wonder about Yuu’s true nature and shows how humans can react in extreme circumstances, and one which completely changes your perspective on every single anime episode that you have watched up to that point.  To be perfectly honest, the story is told and presented in such a way that a plot twist of that proportion completely blindsides you, making for a very compelling episode and makes you unsure of what is it come from that point on.
The ending is rather bittersweet, but it was perfect for what it entailed.  It was an anime that had an acceptable conclusion and tugged on the heartstrings of the watcher.  While I do feel some things could have been done different, the ending is not bad by any means and is a good place to stop.  Though, the only qualms I have with the ending (specifically, the final episode) was that it could have been made into an ENTIRE second season and that Yuu gains the ability to be able to correct an event which devastates someone close to him, but chooses not to do so.  However, even with these minor nuances it ended in a perfectly acceptable manner, even if it felt a bit rushed.

The character presented within Charlotte, at least the main protagonists, all have powers with flaws attached to each of them.  Yuu can possess someone’s body, but only for five second increments; Nao can turn herself completely invisible, but it only works for a specific target; JouJirou can move at superhuman speeds, but he is unable to control where he lands, etc.  I think this is trying to convey that, while you have extraordinary things about yourself, everything has a downfall and you just need to learn how it can best be utilized.  They introduce each of these character flaws in amusing ways as they present the characters themselves, showing the advantages and disadvantages of each specific power.
Character development really only happens for Yuu, the main character.  The main protagonists were introduced as using their powers for good, wanting to make sure they could do what they needed to in order to secure the lives of other ability users.  We were introduced with Yuu using his powers for other things, such as fighting or finding a potential girlfriend, showing that he is willing to do whatever it takes to get what he wants; this is the personality befitting of an anti-hero, such as Light Yagami from Death Note.  I find these types of characters appealing because it shows that everyone has a very dark side to him, and human nature sometimes is about finding the best way to survival; the most reward with the least amount of effort.
We see Yuu him going from someone who is willing to get his way no matter what it takes, to someone who genuinely cares for those around him and is willing to work for a world where everyone can live free of fear.  He grows to respect those around him and shows a deeper understanding of the responsibilities he holds for having the ability that he does.  That is quite a change, for the only person whom we can see that he has any real affection for is his little sister, Ayumi.  While we can see definite changes in other characters, none really matter as much as the main character’s, for his attitude and motivations go in a complete 180 degree turn from where they were during the very first episode. 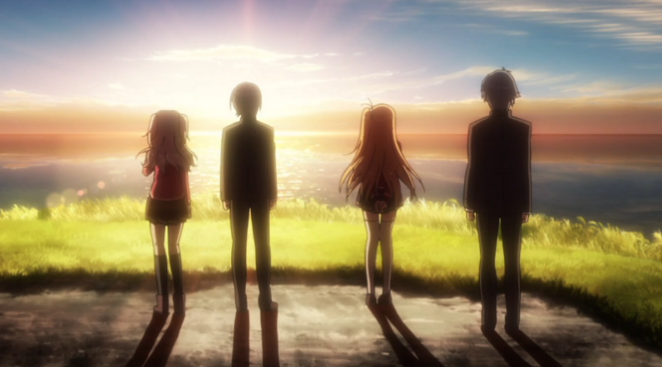 Overall, I feel that Charlotte was an anime that was pretty decent.  It had some heart wrenching moments, some suspenseful cinematics, and it had possibly the BEST plot twist I have ever seen in any anime to date.  The anime itself is also justified in how it progresses through the use of the plot twist, allowing you to really appreciate the efforts of everyone involved on the Hoshinoumi Academy’s student council.  The characters, while intriguing, were not memorable or remarkably original.  The characters themselves existed to get the job done, but are not characters whom I could find myself thinking about once the series is finalized (Yuu Otosaka started off as an ideal character archetype for me, but he evolved into a more caring individual throughout later episodes and came inline with traits that other series protagonists already offer).

I would recommend this anime for anyone that wants a good, short anime series to watch that has all the makings of a good story.  While the ending did feel rushed, it did fit perfectly with what was going on at the time and made for a good a pretty great ending that tugged on the heart strings.
SHARE:
RATE: