The Destiny Beta is finally upon us and I could not be more excited as an Xbox One owner!  Originally I did not think that Destiny was going to be too good, I had also lost any interest I might have had from how mundane many of the game play videos were, and the fact that one person over at Kotaku even wrote an article after he got to try out the game called “I Played 45 Minutes of Destiny, and it was Kind of Boring“.  However, I find that the game is incredibly addictive and I have been having a blast playing it, but back to the point.
This is going to be the second contest held here at RoKtheReaper.com and I am giving away two (2) Destiny Beta Codes for the Microsoft Xbox One as prizes.  The full details will be found after the jump on how you can enter the contest and when to check back for the winner.
Contest Rules and Stipulations
Before you enter this contest, you will need to read, agree, and abide by the follow rules in order o be eligible to claim the prize(s) if you should win.  Note that you are responsible for following these rules and agree to them upon entering this contest, not doing so revokes your eligibility to win.
01.  You must have liked Facebook.com/RoKtheReaper.
02.  You must be following Twitter.com/RoKtheReaper.
03.  One entry per person.
04.  If the prize is not claimed within 24 hours, you forfeit your claim to it and a new person will be chosen.
The Contest! 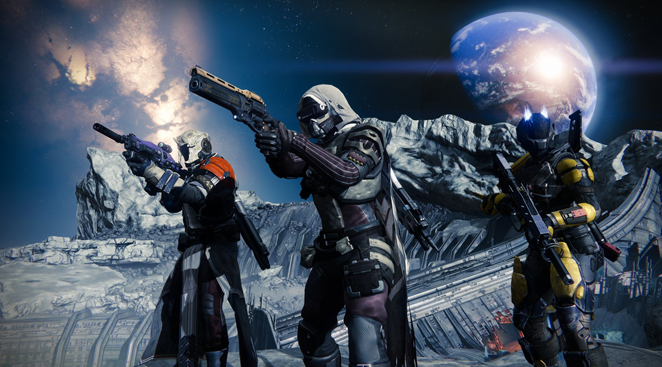 Destiny is a game that is built around 3-man teams, and the emphasis of the game during the missions is the importance of utilizing that teamwork.  I like the fact that being a solo player makes things incredibly difficult and possibly impossible.  Because of this, I want to make the contest theme about how well you play with others and how well you embody the spirit of teamwork.
For this contest, leave a comment below on how you support your teammates during First Person or Third Person Shooters.  I want to know about why you support your teammate in that certain way, the benefits of that particular tactic, and exactly why it is beneficial not to be a Lone Wolf in a game that requires teamwork.  Again, this can be any First Person or Third Person Shooter.  Also, be sure to leave your twitter name at the VERY END of your comment on a separate line, EXAMPLE:
Twitter – RoKtheReaper
The contest ends tomorrow at 3:00 PM Central Standard Time (GMT -6).  I will be selecting the winners from my two favorite answers below, so make sure that you elaborate well!  Thank you in advance for entering and remember, together we stand.

Tifa Should Have Represented Final Fantasy VII in Smash