Sword Art Online II is well underway, and we are already loving the feeling of the world in the massive multiplayer shooter, “Gun Gale Online”.  In this episode, we got to see Kirito as his avatar inside of the game and it was what we all expected from the opening and endings, he’s a female.  However, with him being a girl we got to see a number of things from a female’s perspective, and we also got to see a few things particularly familiar when dealing with an MMO.

I normally do not feel the need to write about these sort of things no matter how good an episode was, but I feel like this particular one definitely deserves it, so go ahead and hit the jump!  (And yes, Kirito’s new “Photon Sword” (Kagemitsu G4) does look like Mace Windu’s Lightsaber in Star Wars). 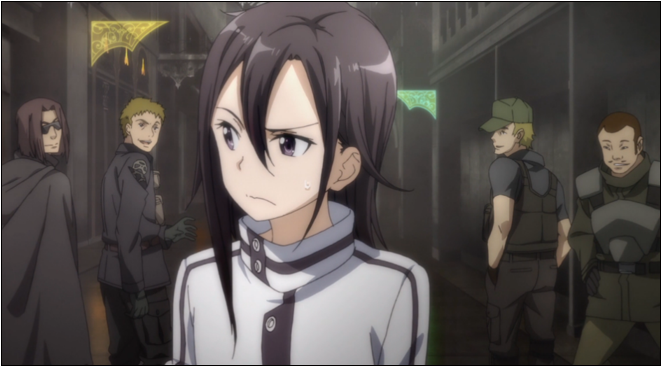 Something I was very amused by was how they made the male players of Gun Gale Online react when a “cute” female avatar appeared within the game.  With some immediately trying to help Kirito out when he looked lost without him having to ask, even commenting that he had “cute eyes”.  The picture above even displays how disgusted and uneasy Kirito is after walking past a bunch of guys who are oogling him to no end.  This behavior shown amuses me because it really DOES happen in games.  I have seen male players go out of their way to attempt  to show new female players the ropes and hit on anyone that makes it known that they are of the fairer sex.  Mass amount of unwanted attention simply because he swapped his look.  Although, Kirito garnering so much attention must mean that women gamers must be a pretty rare thing in Gun Gale Online, this is even backed up by what Sinon says to Kirito as she mistakes him for a female. (Which does not seem to be the case in most other games I know as reports say that women now make up nearly 50% of the gaming population).

Something else that also gets me is the “Double-Edged Sword” of being a male who closely resembles a female avatar.  Seems that our resident pro sniper player, “Sinon”, believes Kirito to be another female player and helps him out in a way that she would probably not do for someone she knew was a new male player (Even offered to give him money at one point to help buy better equipment).  Though, Kirito kept quiet about this to learn more about the game and to find knowledge about the game through someone who was obviously adept at Gun Gale Online versus risking losing that assistance if his true nature was revealed.  I find this ironic because I have heard many cases where men would pose as women in online games in order to be gifted free items or to gain powerful team mates in order to power level a character (Some can even do female voices).

Overall, I just found that this episode was refreshing since we rarely see anything like his (Though, the closest thing might be Akatsuki, a woman who originally played using a male’s avatar in Log Horizon).  This might make some people evaluate their actions from now on since they see how they are coming off, it can also cause amusement in some others who are all too familiar with the scenario presented.  Kirito is bewildered about everything that goes on and is not too sure on whether-or-not to be fully open to the fact that he is a man an extremely feminine avatar. 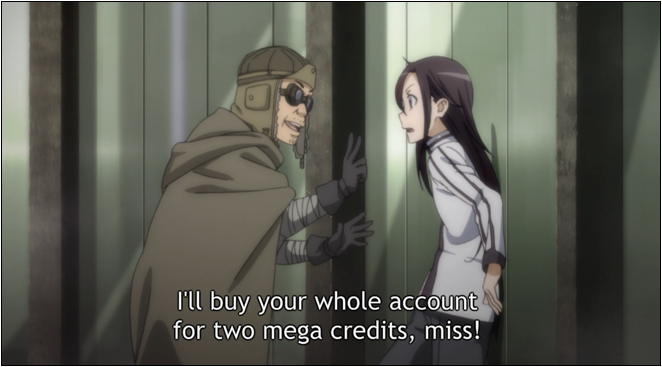 Sword Art Online II also showed some very good examples of things that commonly occur during MMO games during this episode.  At the very beginning someone mistook Kirito’s avatar for a very rare one and offered to buy it off of him for a decent price, though after realizing it was an even rarer one than what he believed it to be, he makes an even more exorbitant offer in order to try and sway him quickly.  I remember my days playing GunZ: The Duel in the International version before a localized North American version was ran by “Ijji”; I had a female character by the name of “§ilhoue††e”, I got multiple offers to buy the character because of the name alone (Nevermind the clan I ran at the time).  Also, even in games like World of Warcraft and Everquest, people have been known to sell their accounts to make hundreds of dollars.

Another thing that intrigued me was how carefully they surveyed the shop in which all the weapons were carried, how Kirito compared the specs to certain guns and wondered why things were displayed how they were.  A day or so ago I took part in the Destiny Beta and had the same problem when deciding which Shotgun I wanted to equip, “What’s better to have?  A decent Fire Rate or better Impact?” (I went with Impact, by the way).  However, Sinon was very helpful in selecting options for Kirito, and even telling him why (After giving him the option of either a handgun or submachine gun secondary) he should use the handgun for accuracy if he is going to be using it as a distraction tool.  These small little things make this episode truly enjoyable and more relatable to us gamers.

Another thing is Kirito grabbing a Photon Sword, a very expensive weapon that resembles a Lightsaber from Star Wars and apparently is “Never used”.  Even though I know Kirito is grabbing it because it resembles a sword, I love the fact it shows him utilizing something that everyone thinks is completely useless because of the type of game it is.  Reminds me when I use to play guns and everyone used the deadly combination of dual shotguns and I used an automatic rifle and dual SMG’s, annoyed the mess out of people and made them reconsider that weapons can be good as long as the person wielding them knows how.