The King of Fighters XIV has started to periodically release trailers that highlight a specific team out of the 16 that are available.  This trailer focuses on “Team South America” which is composed of three combatants (from left-to-right); Zarina, Nelson, and Bandeiras Hattori.

As far as I know, this is a completely new team to The King of Fighters series.  Just like a few of the other teams (which have not had their own official trailer yet), Team South America features a whole roster of newcomers in their debut to KOF.  We appear to have Nelson, a boxer with a robotic arm; Bandeiras Hattori, a self-taught ninja (I am presuming); and a Capoeria fighter by the name of Zarina.

Their stage happens to be a beautiful backdrop that is looming with beautiful blue skies and an abundance of waterfalls, showing a lush tropical setting.  Their music is also carefree with a small spring within its step (favoring more of Zarina’s upbeat nature than Bandeiras’ and Nelson’s). 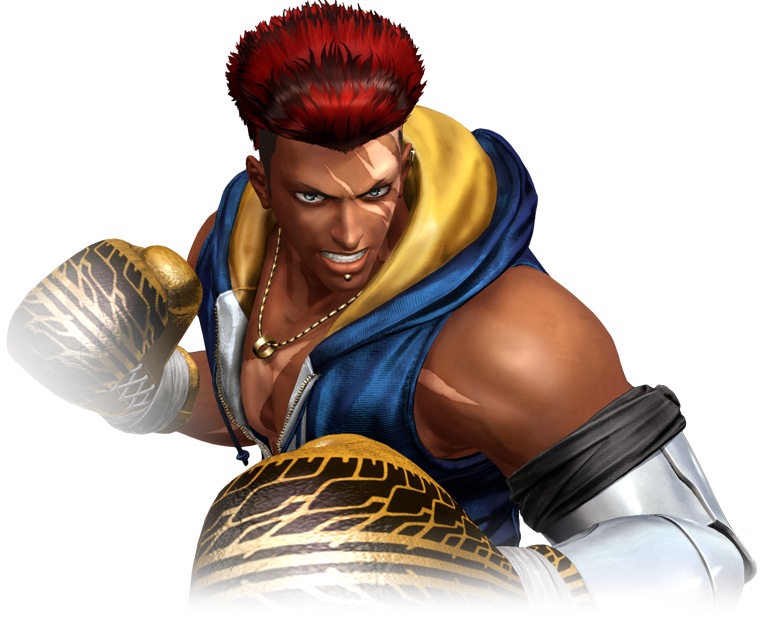 To be perfectly honest, I was incredibly hype for Nelson when he was first shown in his debut trailer (also featuring Athena and Luong).  Unfortunately, I feel like that hype has gone down since I have been introduced to other characters coming along (such as Mian of Team Official Invitation).  Not only that, but I do not too much like much about him outside of the fact that he is a boxer.

Nelson’s overall style is not something I too much care about.  This is partially because I do not really care for the type of clothing that he is wearing (his hair contrasted by his skin, as well as his marking over his left-eye are cool), everything else is not really there for me.  To be honest,  I really wanted to see Vanessa come back as SNK’s boxer for The King of Fighters franchise, mainly because I really like her as a practical boxer compared to most.  Most boxing characters — like Nelson, Balrog, and Dudley — have on actual boxing gloves, which I find to be completely stupid and idiotic.  I find it to be completely moronic because they are entering a martial arts competition and not a boxing match, it does them absolutely NO GOOD to blunt their blows by using gloves.  If they were going to go the route of protecting their hands, then it would make more sense to use UFC style padded fingerless gloves in order to do the most damage while also protecting yourself.  Boxers like Steve Fox, Vanessa, and Heavy D do not rely on them.

As far as his fighting style, it seems as though he is more-or-less like a traditional boxer.  He features a lot of punch moves (some of which chain together like target combos), and he also features dash mechanics (one of which seems to go through projectiles fast enough to punish, and one that can be used off of a hit as a dash cancel).  Nelson seems to be a quick, high pressure character with the ability to easily counter those who rely on spacing with fireballs (not that there is a lot of it going around at high-level KOF regardless).  I also do not really care for his Climax Move, as it seems more-or-less like Steve Fox’s command grab “Ten Count” from TEKKEN.

I was hoping to see more from Nelson’s debut within his own team’s trailer, but sadly, I did not.  Most of the footage appeared to be from his original trailer with very little variation, not giving me much to go on as far as how versatile the character is.  Hopefully when I get my hands on him, that changes. 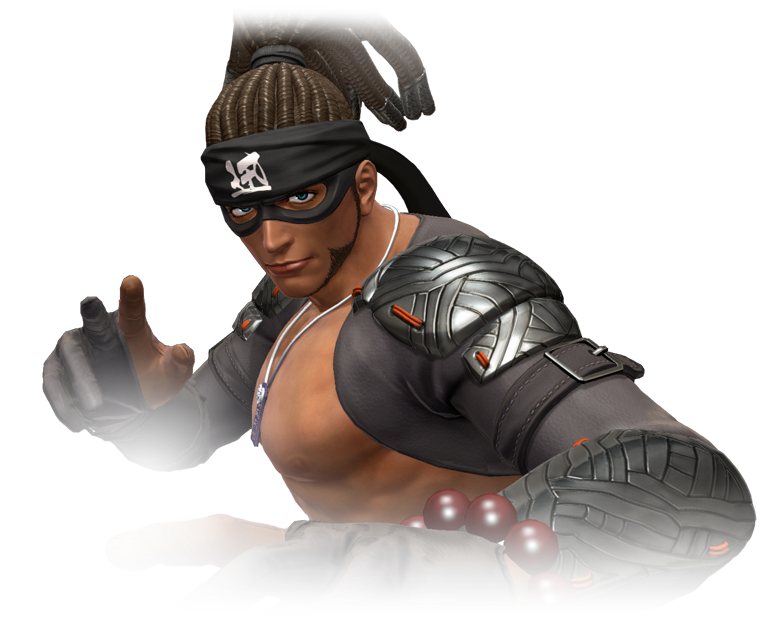 Based on his debut trailer with Mai Shiranui, his dialogue indicated that he is pretty much a ninja who was not properly trained to be one.  Mai calls him a “fake ninja”, and according to the The King of Fighters XIV official website, it lists him as someone who is self-trained and has opened his own dojo to teach others his methods.  It makes no sense that a fully trained Shinobi would want someone else to teach them (in this case, Bandeiras pandering to Mai to be his teacher once he finds out she is a kunoichi).  This goes to show that Bandeiras is something of an otaku who is very fond of Japan and their ninjutsu ways, so he prepared himself to fight in a way that mimics what he believe shinobi are capable of.

Bandeiras fighting style is one of a stereotypical ninja character. I believe this is due to the fact that he is self-taught and they wanted it to shine through within his game play (though some of his moves are oddly similar to Raven’s from TEKKEN).  The biggest note to his self-taught otaku nature is the fact that his Climax Move has him performing hand seals to form a duplicate of himself to mimic what he is doing as he hits his opponent, an obvious note to Naruto and the main character’s ability to replicate himself with kage bunshin no jutsu (shadow clones).  Not only that, but the ending of his Climax Move is a kick that goes into a nosedive spin-grab with his opponent in tow, similar to Rock Lee’s “Secondary Lotus”, which does the same thing.

Overall, I like Bandeiras concept and his design.  I like how they appeal to the otaku nature of some people and shows how it could manifest if it were actually a real thing.  While I did not originally caer for Bandeiras, I cannot help but to respect his design decision and the way he plays.  Good job SNK, I know he will be a favorite. 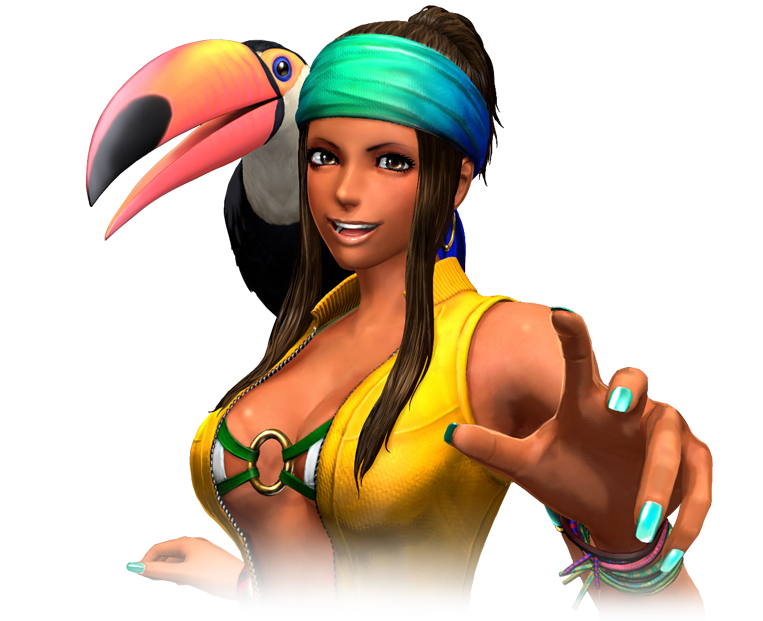 Zarina is SNK’s Christie Monteiro mixed in with a dash of R.Mika’s butt splash action.  Her aesthetics are bright and colorful, and the yellow with the headband reminds me a bit of Rikku from Final Fantasy X.  Her personality is seemingly upbeat and cheerful, and the music that goes with this South America team’s stage seems to fit her the most.

A lot of her moves are seemingly based on Capoeira, and because of this she heavily favors Christie Monteiro from TEKKEN just because there are no other real viable examples.  She has a lot of acrobatic moves, including those which feature spinning hand stands.  Both her supers and Climax moves feature yellow, colorful flowers (which I believe are yellow tulips). One of her grabs, The second Super shown in the video, and her Climax Move all involve her using her posterior as a weapon.  This is a trait many have given to Rainbow Mika, and now many are saying that it could very well have been an influence.

Over all, Zarina did not really impress me.  She did not make way for innovation the same way I feel that the majority of newcomers for The King of Fighters XIV have, and I do not feel that “Team South America” has an overall impact of “excitement” I have been getting from the other team trailers.  She could very well look different once more people have their hands on her and we see what she is capable of in the right hands, but she looks bland and uninspired to me so far.  However, she does get an “A” for optimism, so that is something at least.