The King of Fighters XIV has started to periodically release trailers that highlight a specific team out of the 16 that are available.  This trailer focuses on”Team Fatal Fury” which is composed of the three combatants (from left-to-right); Andy Bogard, Terry Bogard, and Joe Higashi.

After the jump, you will find the embedded trailer along with my impressions concerning each combatant. 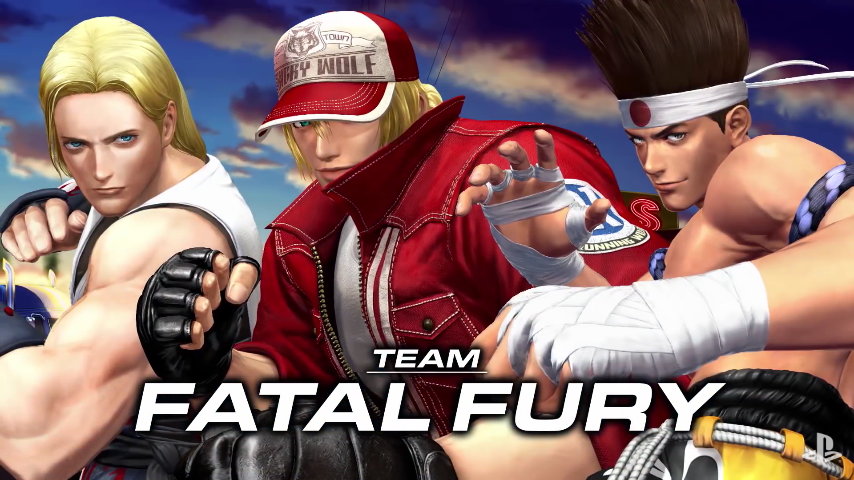 This particular team hits home with me due to them being the most familiar when it comes to my experience with SNK.  The very first fighting game I bought with my own money as a kid was “Fatal Fury: Wild Ambition” on the original Playstation.  Also, I always thought that the Fatal Fury anime trilogy (Fatal Fury: Legend of the Hungry Wolf, Fatal Fury 2: The New Battle, and Fatal Fury: The Motion Picture) was superbly better than that of the Street Fighter franchise.  Therefore, I have an extreme softspot when it comes to this team compared to all others.

Terry Bogard, “The Legendary Hungry Wolf”, seems to have the same moves the he always gets; those moves happen to be Power Wave, Rising Tackle, and Shoulder Charge.  However, it seems than when he activates MAX mode, his Crack Shoot ground bounces the opponent and allows for a follow-up (in this instance he uses Rising Tackle) and his Shoulder Charge gains the ability to do a wall bounce (which he follows up with a Power Geyser).  His Super Desperation moves seem to still be Power Geyser and Buster Wolf, both of which seem relatively unchanged for the most part (though Power Geyser seems to come out in rapid succession versus a more delayed fashion, meaning that SNK wanted to make sure no one fell out of the super).  His Climax looks to be an upgraded version of his “Power Dunk” move, which is very underwhelming.  In all honesty, we should have gotten the Hakkyoukuseiken secret technique from the very first anime movie.

Andy Bogard, “The Human Weapon”, also seems to still be within his core fighting style, much like Terry.  The younger of the Bogard brothers seem to retain most of his Special Moves (such as Hishouken, Zaneiken, Hishoken, etc.), Super Desperation Moves (such as Choureppadan), but they seem to have gained a few new abilities.  Zaneiken, for example, has the ability to wall-splat opponents and leave them in a “crumple” state to follow-up on when Andy is in MAX mode.  Unfortunately, he has kept his Climax move (ChoShinSoku Zaneiken) from The King of Fighters XIII.  Honestly, this would not be a problem if it was kept exactly how it was in its previous iteration, it is less flashy this time around in The King of Fighters XIV; a real pity considering how he had one of the most awe inspiring NeoMax moves from the previous iteration.

Joe Higashi, “The Young Champ of Muay Thai”, seems a lot more bland than I remember him being.  He still has his ability to throw miniature tornados (Hurricane Upper), as well as his Tiger and Thrust kicks.  However, he does not seem to be a very stylish person, nor is his “Screw Upper” Super Desperation move any more awesome than I am normally use to seeing.  His Climax move is not even shown in this trailer, but I know for a fact it is the same “Screw Straight’ NeoMax from The King of Fighters XIII, which is disappointing.

Overall, I thought that this team would have more to offer.  I did not like the music shown for the trailer, and there were bits and pieces about the characters that I did not like overall; Terry’s Super Desperation and Climax moves, Andy’s Climax move, and Joe’s style overall.  It could be that I am just picky because I actually have a deep love for this particular team, I was not very impressed by what I saw.  True, I will probably still end up using and playing with all of them at some point and time, I am just hoping that they will blow me away once I finally have the ability to get my hands on them.

BlazBlue: Clone Phantasma 3DS Review
I’M NOT DEAD! Why RoKtheReaper.com has been on hiatus.