Blizzard’s first original IP in nearly 17 years has an amazingly strong following right out of the gate. “OVERWATCH” is nothing short of addictive, and many have already enjoyed the game’s take on the objective-based team FPS genre since its release in late May.
Every character within OVERWATCH fits a particular type: Offensive, Defensive, Tank, or Support.  Within each of these classes they are furthered sectioned off by having a particular use for that type.  Each of these characters have a unique “Ultimate”, which is a single ability that provides an incredibly advantageous situation for your team…if used properly.
Here are my top 5 character Ultimates of OVERWATCH!

[   My Top 5 Most Powerful Ultimates   ]
When it comes to Ultimates and how I rate them, I think about how they are best able to be utilized by your team.  While Ultimates like Reaper’s “Death Blossom” and Geniji’s “Dragon Blade” have marvelous killing potential, they do not benefit the team as much as some of these others do.  While the Ultimates I have in question does require an organized team to make full use of usually, I feel that they are strongest in the game when used in conjunction with a skilled group.
#5 –Hanzo’s “Dragonstrike” 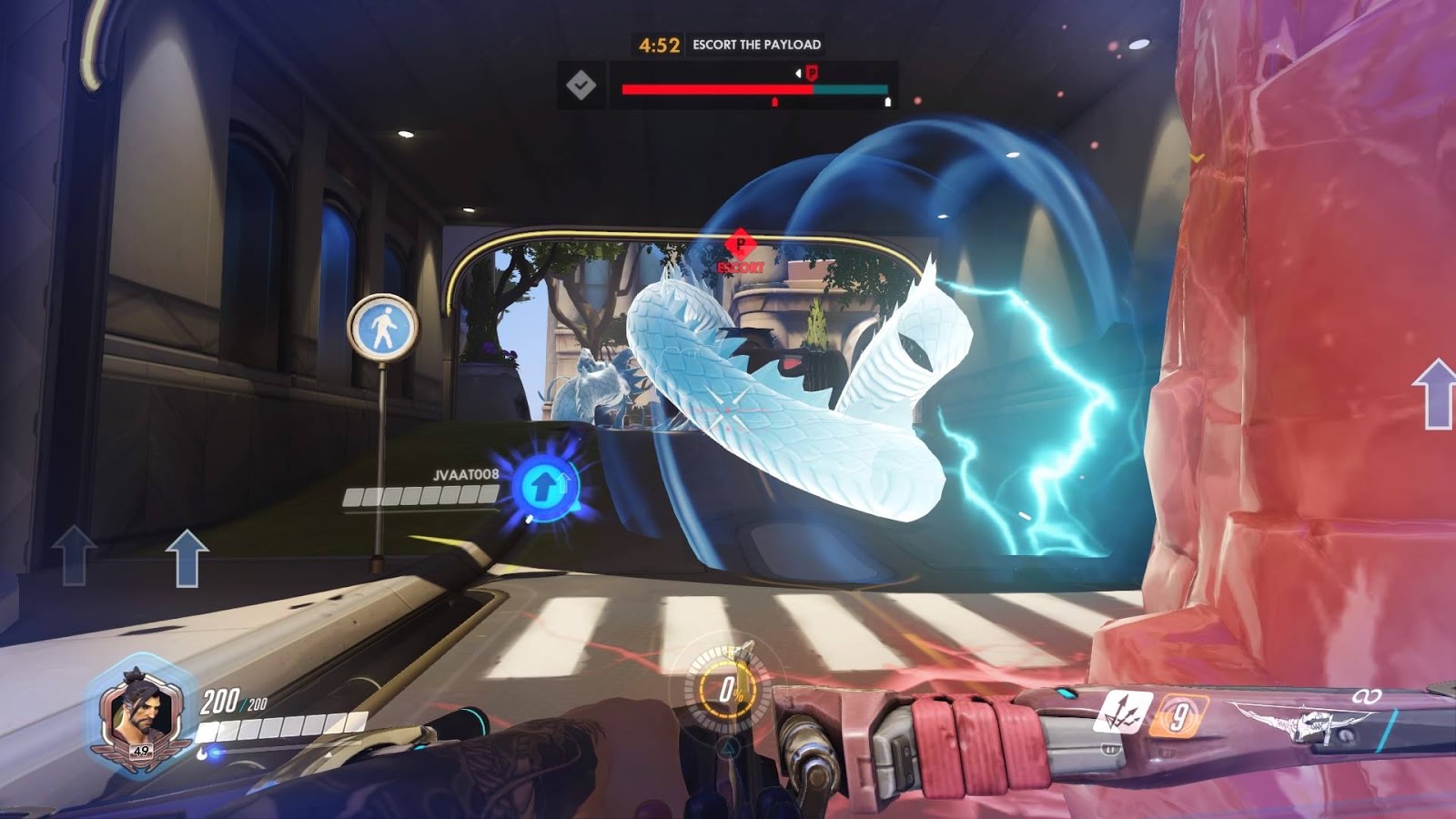 Hanzo’s Ultimate “Dragonstrike” is definitely one of the best within the game.  Hanzo draws back his bows and fires a single arrow while yelling, “Ryuu ga waga teki wo kurau!”.  The arrow transforms into twin dragons that are coiling around each other, appearing luminescent in nature, and continues on through the entirety of the stage through nearly everything.
Dragonstrike is DEFINITELY one of the best Ultimates in the entire game.  The move seems to last forever, it goes through all walls and objectives, and it has the potential to kill multiple people.  The reason that this move is so deadly is mainly because of the fact that you can be caught unaware by it relatively easily since it has the ability to phase through anything in front of it.  True, it is relatively easy to dodge if you happen to see it coming and Hanzo’s call sign makes it pretty obvious, it still can devastate foes out of ear shot or are too busy skirmishing to notice it.  Not to mention if you combine the move with Hanzo’s “Sonic Arrow” ability, you will be able to easily find opponents through walls to surprise them.
#4 – D.Va’s “Self-Destruct” 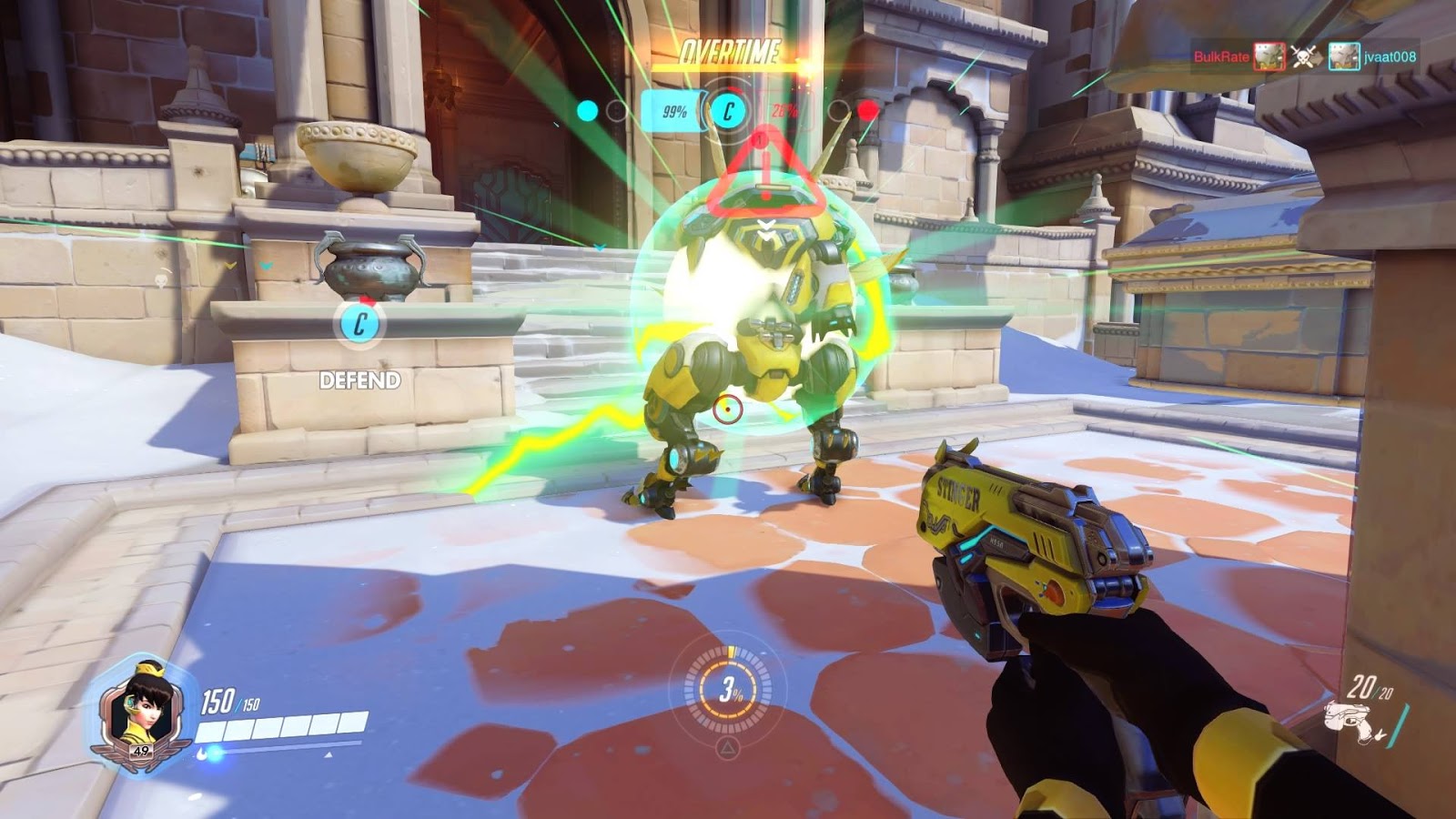 D.Va’s Ultimate “Self-Destruct” is reminiscent of the “Nuclear Eject” ability in Titanfall.  She removes herself from her mecha screaming “Nerf this!”, and begins a countdown that prompts a massive exclamation point encased within a triangle to be shown on the screen to all nearby combatants.  After a small period of time, the mecha explodes and deals massive damage to anyone caught within the large blast radius.  Afterwards, D.Va can resummons her mecha as she instantly has the ability to do after her previously one detonates.
This Ultimate is great for separating opponents who are clinging tightly to each other, dispersing enemies off of an objective, or sneak attacking the opposite team to inflict massive causalities all at once.  Having to deal with a properly placed and timed D.Va Self-Destruct can really disrupt a team and turn everything around.  The most important part of this Ultimate is that it can really destroy and break-up well-placed Torbjörn turrets and troublesome Bastion placements with little risk to the rest of the team.
While opponents can easily run away from D.Va, someone like Mei can throw up an ice wall to protect the team, or they can retreat behind Reinhardt’s shield; they are not able to escape it 100% of the time just using those.  The ability to be able to use D.Va’s boosters in conjunction with her Self-Destruct Ultimate, you can drop it down or push it around corners at unpredictable angles.  Also, by not allowing it to cross into the line-of-sight of enemies until the countdown to explosion is nearly complete, it creates a near impossible window for human reactions to make the best possible decision in avoiding it.
#3 – Symmetra’s “Teleporter” 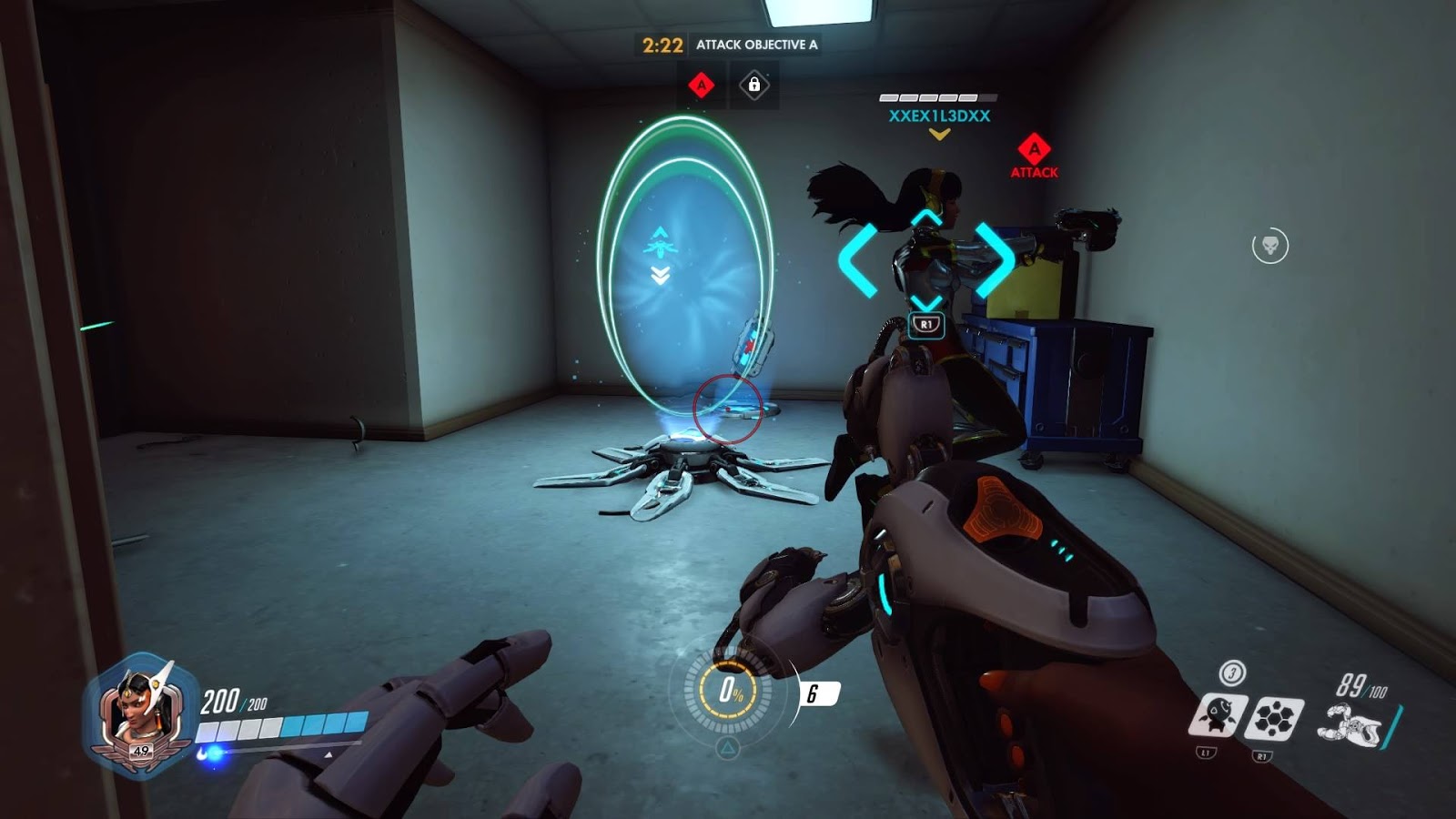 Symmetra’s Ultimate “Teleporter” reminds me of the portals from Portal.  Essentially, she places a portal down where she currently is and another one pops up within the current spawn point for your team, allowing those who have perished in the heat of battle to return to the fray near instantaneously.
This Ultimate is so powerful because it allows your teammates to get back into the fight much quicker than they would have been able to do so without it.  The 10 to 15 seconds it would have taken a fallen comrade-in-arms to make it back to the fight could make the difference between a successful push and the opposing team scoring a Team Kill.  There have been times when my team have successfully defended an objective because we did not have to run 25 seconds to get to the first checkpoint from our spawn on every death. Moreover, if you are within your final moments of the match and are currently fighting against the “Overtime!” clock, then getting friendlies back to the payload or capture point is crucial.
#2 – Mercy’s “Resurrect” 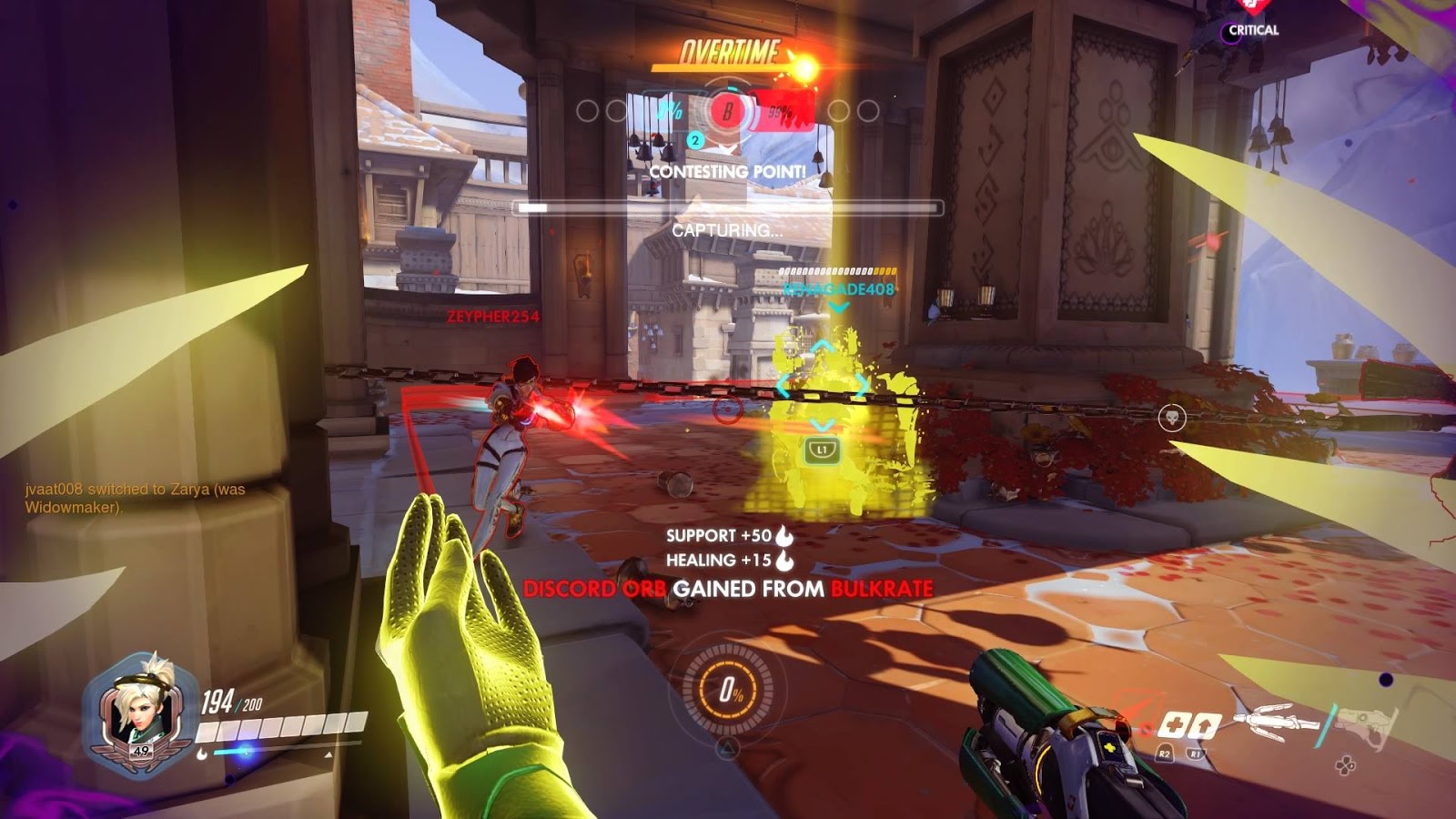 Mercy’s Ultimate “Resurrect” literally makes everyone rise from their grave.  With a wave of her hand, yellow light surrounds all dead allies within range and the iconic line, “Heroes never die!”, is shouted by Mercy.  Invincible for a second or so afterwards, it allows an immediate return to the fray for all allies.
This is pretty much the instantaneous version of Symmetra’s teleport.  It allows all fallen teammates who are awaiting respawn to be brought back to life.  This Ultimate is massively powerful because it can really turn the game around and disrupt the opposing team.  Usually in desperate situations, or choreographed attacks, you will have multiple characters working in unison to storm an objective or team.  This type of blitzkrieg tactic usually leaves ruin within its wake, a good Mercy can wipe away that sweeping force and make everyone fight again at neutral.
The state that this puts into enemies is the biggest push for this being second on this list.  Hearing “Heroes never die! “, after a massive wipe inspires your team at current while making the other team swear loudly at how they, “did that at just the right time”.  However, it can also detriment the team if your enemies are ready for it and have a secondary plan in the works in case they have to deal with Mercy’s Resurrect, so be careful.
#1 – Widowmaker’s “Infra-sight” 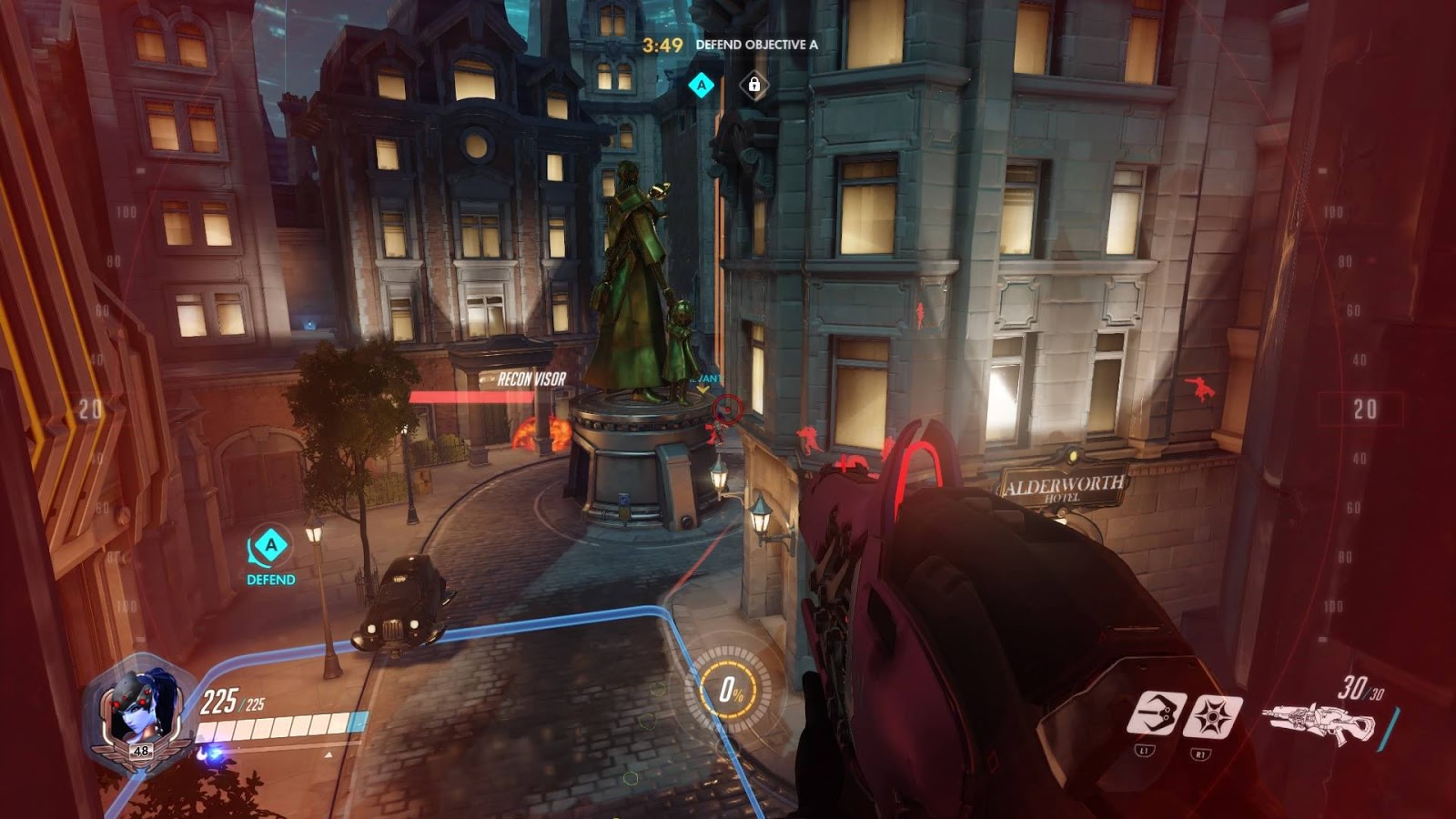 Widowmaker’s Ultimate “Infra-sight” is the legitimate version of the popular cheat “Wall hack”.  Widowmaker’s thermal goggles allow her to see foes through walls by putting them on, but it grants this ability to everyone on the team.  Her call sign, “No one hides from my sight” is very subtle and can easily be drowned out by the noise on the battlefield…meaning that it is often not heard and often times is not caught by the enemy team.
The reason I am rating this as the most powerful Ultimate in the game is because of the way it supplies your team with the best tool to deal with enemies; knowledge.  Someone trying to flank, others waiting to gank, and surprise setups that would be effective otherwise are rendered useless by the ability to see where everyone is, even through walls.  It is so useful that it is one of the main hacks on PC whenever an FPS becomes available.  Knowing what your opponent is trying to do without them knowing is a godsend to organized teams.
SHARE:
RATE: