Monty Oum (Creator of Haloid, Master Chief vs Samus Aran and the Dead Fantasy Series) along with ROOSTER TEETH premiered their new collaborative series “RWBY” with the Red Trailer (Read my analysis HERE).  After the trailer I was pretty hype and awaiting the arrival of the White Trailer, and it has been released!
In this article I will be explaining the trailer, dissecting it down while making predictions based on what is shown.  I will also be giving my impressions on whether or not I think the trailer, character, and enemies are good along with how I think RWBY is shaping up from the two released trailers.
You can catch the full article with my analysis and impressions when you hit the jump!
[ White Trailer Analysis ]
This trailer begins with a saying of sorts, or more like a quote,  “Everyone is entitled to their own sorrow, for the heart has no metrics or form of measure.  And all of it…irreplacable”.  I believe this is referring to the song “Red Like Roses” which played during the “Red” trailer which explained, “White is cold and always yearning, burdened by a royal test”.  I believe that this trial weighs heavily on White and is something that she alone carries, because of that it is her own personal test which has an invaluable reward upon contemplation.
Next off we see “White” heading out after her name is called (Sorry, I cannot make out what the announcer is saying) before clapping begins and she takes center stage.  After soft music from the keys of a piano she opens her mouth, closes her eyes, and begins to elegantly sing the song that is played throughout this trailer (The song is called “Mirror Mirror” (The fact that the song is called this leads me to believe in “Mirror, mirror on the wall, who is the fairest of them all?  So is this Snow White?).  Also, by her singing this more than likely means she is a performer, I would guess opera since she is elegant but the song is not opera-like in manner).  After her singing, “Mirror, tell me something, tell me who’s the loneliest of all”, the camera pans down and through the floor where her reflection is shown (Mirror Mirror, right?).  Soon enough the music stops, the reflection is no longer the inverse but the actual, and the girl is now standing in front of a large Black Knight with a broadsword.

The girl pulls out a rapier after dodging a blow and holds it with one hand, it seems to have a magnum revolver type mechanism near the hilt of the blade.  She seems to be quick and agile, and the blade is strong enough to not break with the impact of the broadsword, which is pretty significant seeing as a rapier is a rather delicate blade.  The girl is also shown to have some type of magical powers as she is able to form circles after specific actions with her hands.  One time after this she is shown moving fast in movements similar to that of an Ice Skater, and even used to stand in mid-air and change directions.  Her attacks however, seem to have little to no effect whatsoever and she is knocked down eventually by the larger Black Knight before taking a moment to reflect and plan her next attack.

Standing to her feet with renewed resolve, she points her rapier towards the Black Knight and uses the revolver function to switch to the color red, which illuminates the blade with that color.  This color seems to auto parry moves, since the Knight struck her sword and it caused feedback significant enough to bounce the blade away in so forceful a manner it caught him off balance.  Afterwards, energy gathers into her blade and she casts an ice wave, trapping her opponent and rendering him immobile; no idea if this is still red or if the revolver mechanism switched to something different to obtain this effect (Maybe blue?).  After catching a ride on her swinging opponents broadsword, her rapier glows green and she does a quick attack which disarms him of his weapon.  Rapier soon lands on purple which seems to be similar to a landmine, exploding the Knight into the air before casting out magical threads which secure the Knight in place mid-air.  Jumping into the air the revolver mechanism on her sword spins until all colors and the blade itself glows white.  She goes through the Knight who soon disperses into white energy.

Before long she is seen back on the stage with snow coming down and the cheers of an audience.  Looking upwards she sees the moon, which is ironic since during the “Red” trailer when Ruby finished she was standing in front of the moon.  She then gives a polite curtsy as the curtains close and ends the trailer. 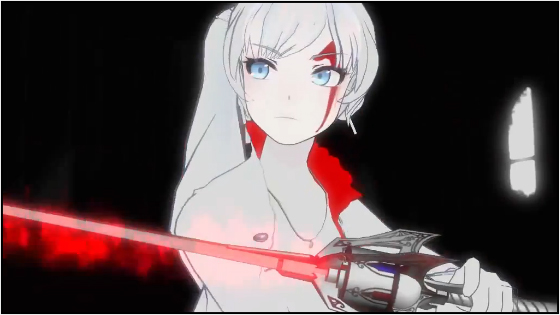 Honestly, I was VERY disappointed by this trailer.  I waited for quite a while to see what Monty Oum was up to and even though I was not very impressed by the “Red” trailer, I felt like it still had potential and understood what it was meant to do, not to mention the Gun-Scythe was an interesting innovation on a weapon rarely used because of its awkward nature.  However, the “White” trailer did not wow me a single time, and I even thought it was fairly cheesy and failed to convey any emotion or a “cool” factor.  Probably because I felt like it did not live up to what Monty Oum is known for nor did it say much at all about the character or have any visible hints as to her motives for fighting.  Also, I was hoping for something a bit more original since we now have a wide array of characters that use a rapier (Orie from Under Night In-Birth, Raphael and Amy from Soul Calibur, Mitsuru in Persona 4 Arena, etc.).

First off, the fighting.  The fighting is the main thing I did not like about this trailer since the opponent was lacking and the heroine was lacking.  The Knight was incredibly slow and sluggish and did not pose much of a challenge since his opponent was faster, but at the same token I did not feel that the girl was actually strong enough to take down the Knight and would have been best for her to flee (Basically, I do not think he made the girl’s ability to defeat the Black Knight very believable).  Monty Oum also borrowed the ice attack from what he made Tifa do in Dead Fantasy II, rehashing old moves is not something I want to see.  Furthering my point, this girl’s finishing move in the trailer looks strangely similar to the Under Night In-Birth’s rapier wielding character Orie’s Instant Kill (She’s the 5th character in the trailer HERE), not to mention her companion is a Knight with a Broadsword, coincidence?  Also, her weapon clearly has different uses dependent on which color on the roulette is selected, but during each new power she displayed there should be a show of it turning to symbolize that.  The skating did not go well with me either, her movements are suppose to be graceful and elegant and that should be demonstrated through movement and attack form, not giving her figure-skater movements.

Something else that greatly annoys me is the overall look of the character.  She uses a rapier and supposedly sings with a beautiful voice, the song “Red Like Roses” from the first trailer hinted that the person in the “White” trailer could be royalty and under some type of test, “Mirror Mirror” the song is titled after what the wicked Queen normally asks her magical mirror (And the lyrics, “Who’s the lonelist of all” instead of “Who’s the fairest of them all” leads me to believe that as well).  Her look should either be purely innocent or something princess-like, and I see neither one.  She actually looks pretty bland to be perfectly honest.  Straight hair or curls would have probably suit this character a lot better than a ponytail, but that is just me nitpicking and is my preference; I really do expect elegance when dealing with a rapier user.

Next off is just the atmosphere and the way the trailer is presented.  If she is lonely, why is she singing in front of people and gaining applauds and admiration?  You could always argue that she is lonely on the inside and feels nothing from those praises, but then why would she do it in the first place then?  We do not have much to say about her character as of now, mainly that she is a singer, a possible magic user, and is more than likely based off of Snow White. 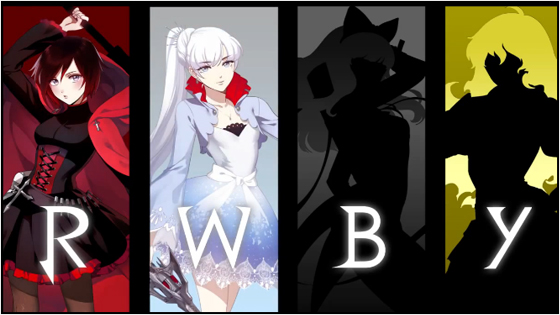 Monty Oum gave me the wonders of Haloid and Dead Fantasy, I am even a big fan of his “Road” series, but so far RWBY is looking very disappointing.  The style is anime but it is much softer than I was expecting and a bit too cutesy for the type of fighting he could really shine in (Something where blood feels like blood).  Also, both trailers were not good but “White” had a weaker showing than “Red” by far.

To be quite honest, I am really beginning to lose some interest because of the direction this series seems to be heading towards.  However, I figure that the “Black” trailer should be the darkest of all of them and is where my hope for this series is currently lying; I suggest that Monty think of a way to universally connect us with the character’s ambition out right and give us an opponent for her to defeat that will show some of the intensity that is to come…otherwise Oum’s first original series could end up as a big flop (In my book, he already has a big following for this series but I think his other work is much better so far).

Thanks for reading!  Sayonara!