The King of Fighters XIV has started to periodically release trailers that highlight a specific team out of the 16 that are available.  The second trailer released happens to be that of “Team Yagami” which focuses on the three combatants (from left-to-right); Mature, Iori Yagami, and Vice.

The trailer has been embedded along with my impressions regarding what we saw out of each combatant.  As of this writing, I have not written an impression for the first trailer which focused on “Team Japan”.  This section will be updated with a link to that article once I am finished. 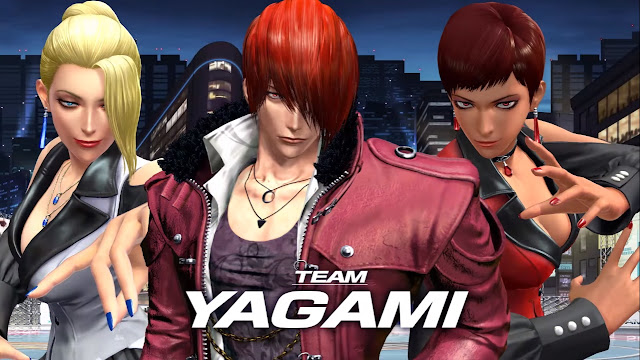 Iori seems to have his powers back that were stolen from him during the “Ash Saga” by Ash Crimson.  His mainstay projectile as well as “Dragon Punch” move still being intact, with very little change all around.  It seems that his Climax move is still the same as his Neo Max from The King of Fighters XIII, which I thought might be significantly different since he seems to have regained his powers.  Overall, he does not look at all different and maintained his overall style and characteristics.  For fans of the character this is a good thing, but for people like me who found themselves not really caring to play Yagami-san, this is more of the same.

Vice was displayed after Iori, and seems to have a hard hitting move which causes a slight wall bounce which can be combo’d into her command grab.  Unfortunately, I am not a fan of either of her supers as they do not appear “brutal” enough, especially since she is a character I consider to be one of the most physically capable among the KOF women.  Aesthetically, she has moved over quite well into full 3D and her outfit change from The King of Fighters XIII does not look bad on her.  The only thing (besides her supers) that I lament is her Climax move.  It is very simple and uninspired, they could have given her something that made use of the fact she can super extend her sleeves and grab opponents.  Disappointed overall.

Mature mimics some of Vice’s vibe; this mainly comes from her wearing similar clothes (I mean, she always does.  I wish they would have changed that) and having a move that hits hard enough for them to bounce a bit off of the wall to be hit by a special move.  Most of her special moves are simply clawing away at her opponents (something her and Iori have in common), and while her projectile is present, where she leaps through the air and slashes her opponent seems to be missing from her arsenal.  I have always loved her super where she slams the opponent into one wall and immediately reverses directions and does it with the opposite as well.  However, seeing as this is a full 3D game, they should have made it where she is running with the opponent across the stage instead of just sliding along (makes it a lot more believable).  While you do not see her Climax cancel during her game play demonstration, that is because her Climax move is actually what is hitting Iori at the very beginning of the trailer which ends with her closing up her compact make-up kit.

Overall these characters are not too bad, but they are essentially the same as what we are use to.  They are not really reinvented for this brand new iteration of The King of Fighters, which means it is both good and bad.  It was a very safe move on behalf of SNK to introduce them like this, but it has worked for them so I cannot too much fault them.  So not a bad release, but I am really looking forward to see if any other returning characters are presented with more ingenuity.