Waifu Crush Wednesday is modeled after the popular “#WCW” or “Women Crush Wednesday”.  This bi-weekly editorial focuses upon female characters in gaming, anime, and manga that I happen to like in one form or another.  I will do my best to explain my affinity for that particular character.
If you are familiar with SNK or The King of Fighters, odds are that you are aware of their busty ninja, Mai Shiranui (The first female character to appear in an SNK fighting game).  I first discovered this girl by playing Fatal Fury: Wild Ambition on Playstation.  However, I really come to love her character due to her appearances in the Fatal Fury animated movies.  Since she is returning with Team Women Fighters in The King of Fighters XIV, I figure I might as well show my favorite SNK girl some love!
[   Mai is Life!   ] 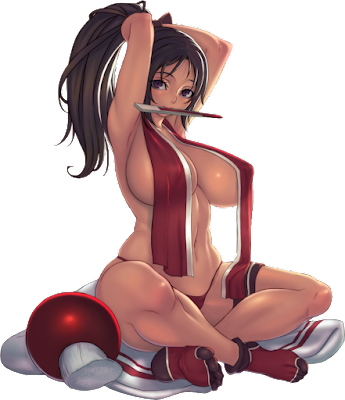 Mai Shiranui is a kunoichi who has the ability create and manipulate fire.  Not only that, but she is also part of the “Women Fighters” team in The King of Fighters video game series.  Oh, and let us also not forget that she happens to be madly in love with Andy Bogard.

When I first starting playing video games, a lot of people would compare Mai to Chun-Li.  This is probably because Mai Shiranui is SNK’s first woman of fighting while Chun-Li happens to be CAPCOM’s.  They typically argued about two things, which one would win if the two ever fought (I was right, as Death Battle rewarded Mai the win.  I think she would be able to win in an actual fight myself), and who had the bigger bust size (I was completely wrong about this, as it appears that Chun-Li actually has the edge here.  Who would have thought?).  While these details about Mai are great, they are not necessarily why I love this character.
My affinity for Mai spawned almost exclusively for her roles in the Fatal Fury animated trilogy, however, she only appeared in two.  These movies were Fatal Fury 2: The New Battle and Fatal Fury: The Motion Picture.  Despite the fact that she was a rather busty and attractive woman who proved she could fight very well, she had an undying devotion for Andy Bogard.  This type of loyalty was something I had rarely seen in relationships and certainly not from attractive women.  While many did attempt to flirt with her or even complimented her on her looks, she stayed with blinders on when it came to Andy.  Her personality was often joyous and overzealous, and she never seemed to be without her energetic disposition.
Another part of Mai did come from her appearance.  While many characters at that time in fighters did feature women, she was about the most scantily clad out of all of them.  Other ninjas did wear outfits that were a bit revealing in some way or another (Kasumi and Ayane from the Dead or Alive series, for example), Mai was the first I saw to do it…and still the best to do it.  Over the years that she has remained within the series, she has yet to change her outfit up, and I am all for, “If it’s not broke, don’t fix it”.
She is making her appearance once again for The King of Fighters XIV, and I am looking into playing her seriously within this iteration.  All the other times I have gotten a chance to play her I was a button masher, but since I know what I am doing I figure why not (I barely played The King of Fighters XIII due to its horrendous netcode issueus)?
Mai is life!
SHARE:
RATE: