Nutaku is currently celebrating its opening of an adult/hentai downloadable games store.  Many people have had a problem with this, with one article I read saying that it was a “new low for gamers”.  Many social justice warriors complained about the localization of “Dead or Alive: Xtreme Beach Volleyball 3” which made Japan think twice about releasing here, thus those who wanted it had to import.  Not to mention various censorship of titles released in the west across the board, even Nintendo’s Fire Emblem titles were not safe from being altered.  Needless to say, western gamers who want to experience a more “adult” taste cannot.
This store is aiming to change all that by providing a way to download risqué titles, and it stands as a win for us gamers who actually want to play these sorts of games but cannot because of an oversensitive crowd.  Hit the jump to hear my full reasoning on why this benefits us in the long run.
[   What’s Nutaku?   ]
Before I get started explaining “Why it is a win for us gamers”, I figure it would be better to tell you about who Nutaku are for those of you who are curious.  What is featured here is copied and pasted directly from their “About” section, so it is a verbatim representation of what they themselves say that they are.  I figured that would be best rather than putting it into my own words.

[   The World’s Fastest Growing Adult Gaming Platform   ]
The Nutaku team was brought together by a shared passion: adult indie gaming! As both players and developers, we created our site in the belief that gamers should be free to enjoy high quality titles from around the world, uncensored and in English. Whether artists, programmers, designers, or managers, every employee at Nutaku is first and foremost a gamer.
[   A Revolution in Adult Gaming   ]
Nutaku is the first English-language game platform dedicated to adult titles. With a talented team of website developers and media specialists, we provide game makers a comprehensive distribution platform that offers unparalleled options for bringing their products to market. As the adult gaming scene grows, Nutaku will be the premier destination for players and developers to discuss games, organize communities, and collaborate on upcoming projects.
[   How Nutaku Works   ]
Our company provides a host of services for game developers, ranging from well-established studios to newly created startups. We offer translation, hosting, 24/7 website support, and monetization services, in addition to highly developed marketing campaigns across the largest adult and gaming sites on the web. 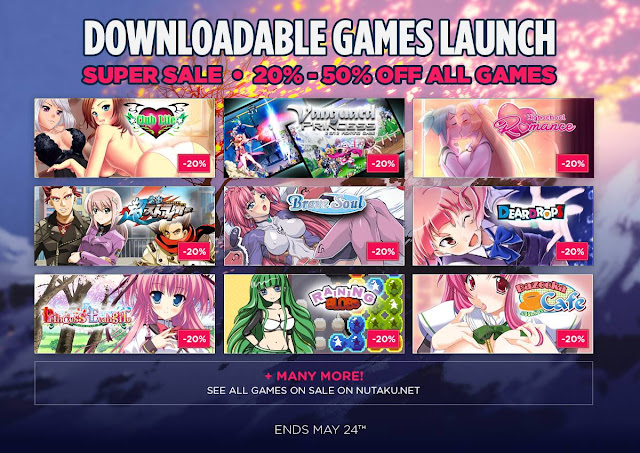 Gaming is supposed to be an outlet to which those of us who want to experience something different, can.  It is supposed to be a medium of entertainment which has the same type of artistic expression as film, music, and drawing.  Music within the mainstream discuss sex all the time, we have R-rated movies which have “softcore” type visuals quite often (not to mention massive amounts of violence), and we even have the gall to have “AVN Awards” for pornography here in the United States.  Therefore, why are people getting so choked up about if games are sexual in nature or not here in the west?  When it is present across all other platforms and we are even giving awards out for having sex in front of a camera, why are we not allowed to enjoy adult gaming within the privacy of our own homes?
Nutaku’s platform is something which spits within the face of conventional gaming which outlines specific rules.  Consoles and Steam refuse to carry these “AO for Adults Only” games, meaning that it is very hard to find here in the west.  While Japanese gamers do get to enjoy adult-only games, we here in the west are highly restricted, but Nutaku is aiming to change all of that.  By having the freedom to download anything that catches our eyes of an adult nature, we are able to now experience another side to gaming that as all but locked away from us before here in the west.
Something to note is that not all games have to feature sexual explicitness in order to get the “Adults Only” rating.  Hatred, a game which features only violence and some language, received an “AO for Adults Only” because of the “content” of its violence.  Many people were outraged at someone leading a massacre against innocent people, even though some games like Gears of War literally have you blowing people into flesh chunks.  I also happened to write about why this was a double-standard within the gaming community, but even that met some backlash since many hated “Hatred” purely because they do not agree with the game rather seeing why it should be allowed even if they do disagree.  Violence is violence and the reason will always vary, but we should be given a choice.
Mortal Kombat prompted the creation of the ESRB (Electronic Software Ratings Board), which stands as by far one of the most accurate and strict ratings board of any type of medium (E for Everyone, T for Teen, etc.).  Even knowing this, most do not get the A-OK to produce a video game that has the potential to be rated AO.  This is often because they are afraid that these will land into the hands of children (which is null and void because kids still find ways to browse pornography on the internet and watch intense moments of violence on everyday television).  It is the parents responsibility to keep this away from children and not use gaming as their baby sitting tool, but we know this to be true from the many thousands of kids playing games like “Call of Duty” which is almost ALWAYS rated M for Mature.
The backlash and stigma behind adult games are pushing many developers from making anything remotely close to being rated AO.  They do not want to have to deal with the protesting and outrage many “consumers” would have for including adult themes in video games, even though the majority of gamers do happen to be mature adults.  These are just the negatives from having sexual themes in games, even if they are not rated to be “AO”.  If games happen to get the “Adults Only” rating, things get much, much worse.
Twitch.tv, the largest streaming website for video games has even taken it upon itself to official ban any adult rated games from being displayed (which is no surprise since they even banned the indie game “Yandere Simultator”).  Moreover, all platforms have it within its policy that no “Adults Only” games are allowed to come to their system, meaning that it is a massive deterrent for anyone wanting to go outside the norm.  In fact, many games that are screened and could possibly get the AO rating from the ESRB edit their content until they are within the “M for Mature” rating so that they may release it onto consoles.  Again I have to ask you, why are we so limited? “Morality”?
Hopefully if enough people get behind Nutaku’s plan and show that we actually are willing to pay for Adults Only games, it may make more developers begin to go outside the box and make games we have not seen before.  It may also help games that are localized here in the west stop altering their content out of fear that they will lose out on customers and profit while simultaneously facing waves of social justice warriors.  I only hope that this is the first step of many to give gaming the same artistic freedoms that are expressed in every other piece of mainstream media.
Thanks for reading!
SHARE:
RATE: