With an intense game ahead of us, one can only imagine what is about to happen.  Great intensity is sure to be a factor in possibly the biggest challenges for anyone who plays high school baseball in the Kanto region of Japan.  However, with that in mind, I wanted to look back on Ace of Diamond episodes 41 through 44 and examine exactly why they were so crucial to Sawamura’s character development as far as the future of this show goes.

The game against Inashiro is just on the horizon and we will see the epic showdown finally come to its head.  However, before everything gets going I want to take a look back and reflect on Seido’s previous game against Sensen Academy and exactly why the game was so pivotal in the character development of Sawamura  More so than just the game itself and the possible evolution of his pitching style, but also in reference to his ties to his friends and the possibility of an impending challenge that takes place over matters of the heart. 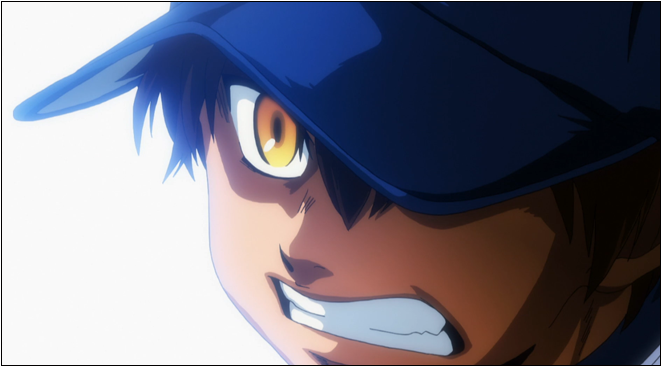 At the very beginning of Ace of Diamond we got to see Sawamura Eijun lose by throwing a pitch that went completely off its path, causing the umpire to call it a “ball” and losing the game as a result.  However, his spirit in throwing the ball sparked the interest of one of Seido’s scouts, Takashima Rei, who then went to see him and convince him to come to Seido to see how they practice to encourage him to join.  You see, Sawamura decided to go but he was debating heavily on whether-or-not he wanted to leave his friends, he wanted to continue to play baseball with them but he was not going to be able to do so if he went to Seido instead of his local school high school.  After some convincing from his friends and understanding that he is going to need to go to Seido to truly compete, he decided to go and put his skills to the test.

We have seen significant improvements from the very beginning of the series, we identified why his ball was so hard to hit (As it was a moving fastball), including the fact that he can pitch a four-seam fastball to the inside with very little fear.  We have seen further improvements due to the fact that he learned how to throw lower to the ground by swinging his arm late because of his new form which hides the ball behind his body (This stance is only possible due to Sawamura’s flexible shoulders).  This is all well and good, but it should an obvious flaw when they were playing against Todoroki Raichi’s team since all you had to do was technically swing hard to get it to the outfield.

In the Sensen game he unknowingly threw a “Crossfire Pitch”, a pitch used by right-handed pitchers against left-handed batters and vice versa, where the ball crosses the plate from the outside going in towards the edge of the strike zone, making it difficult to hit.  This new weapon could prove to be his main weapon against right-handed batters in the future (We probably know that because the title of the episode this debuted in as “Best Pitch”), especially since most people consider the inside four-steam fastball to be Sawamura’s best pitch.  I would also not be surprised sometime down the line if we happen to see a Crossfire pitch mixed in with his moving pitch, creating something new and unexpected.

[   Social and Romantic Relationships    ]
The problem with Ace of Diamond up until the Sensen game was that we were shown very little interaction from his friends back home.  I mean sure, we saw him text Wakana a few times here-and-there, but it seemed mostly like she was sending him text messages and that his friends would respond for him (At least that is what one of the guys said), effectively making it where he still did not keep much contact.  You would think that, given that he was going to decide whether-or-not he should go to a high school based on staying and playing with his friends, that he (Sawamura) would keep up with them more and let him know how much he missed them.  During the game with Sensen, part of the plot seemed really focused on Eijun’s friends and that they were still cheering for him, even if they were going to a different school with a different baseball team (Wakana texted Sawamura in episode 41 and mentioned how they were enjoying their summer break since they lost in the first round).
During these four episodes it was obvious that they were building up various things within Sawamura’s social circle.  His friends are one thing, showing that they will always be behind him and that he appreciates them no matter how long it has been since they have seen each other.  Despite them losing very early on, they still came to cheer on their friend instead of simply being down in the dumps from losing so early and not getting a chance to play against his team.  Something else that seems to be in the works is the possibility of a love triangle between Haruno, Wakana, and Sawamura.

Wakana was introduced merely as Sawamura’s friend early on in the anime, she appeared to be the sole female member of his middle school baseball team and nothing more than that (In fact, she seems to be the only female in the entire series who was actually a member of a baseball team as a player).  However, it seems that her and Sawamura do text fairly often, and at least if he does not respond all the time himself (As stated above), it seems she does write her own messages and seems to blush the whole while.  Even when they came to the game after Sawamura got a strike out, she was blushing quite hard and seemed to angrily look away (Kind of like a “Tsundere” type character).  The way the camera introduces her also speaks volumes of how they want the viewers to look at her.  Having a teammate get jealous because Sawamura was talking to such a beautiful girl, not to mention close-ups on her eyes, feet (You would be surprised how many men have this fetish), breasts, and a full body scroll of her suggests she’s suppose to be incredibly sexy.

Haruno has less evidence to support her liking Sawamura, but even from the small bit we have seen, it can be reasonably implied.  She only talked to Sawamura once, but she has admired his attitude and persona throughout the whole series.  She also looked a slight bit worried when her friends were asking if Wakana was the “girlfriend they had heard so much about”, as if she was a bit distraught.  This means we could see her making more of an effort to talk to Sawamura, or at least to find out whether-or-not Wakana and him are really dating.