Beautiful, ruthless, and someone who treasures strength above all else perfectly sums up Esdeath.  Esdeath happens to be the “Final Boss” of the anime Akame ga Kill, so to speak.  She possesses power that is unparalleled to most since her Imperial Arms, Demon God Manifestation: Demon’s Extract, gives her the unique ability to be able to control ice no matter where she is, no matter the weather, whether she is around water or not.  Living by her father’s creed, “The strong survive and the weak die”, she can be heartless and brutal at times…but why is it that I am so fond of her?  I guess you will have to hit the jump to find out! 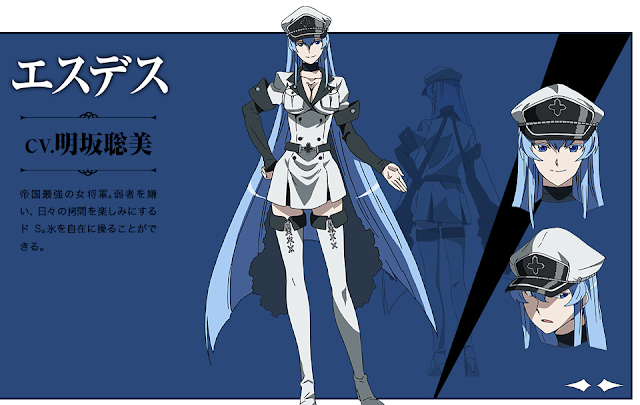 Esdeath is someone who can kill without mercy, shows no sympathy for anyone whom she has killed, and she barks orders.  She is someone who is feared because she bows to no one and only wishes to fight and defeat strong opponents, lusting for a world of everlasting war to forever be locked in combat.  This woman has proved to be a cruel sadist, wiping out countless lives in order to achieve her objectives while making sure those who serve her can do whatever they want.  She is anything but a good person, but that what makes her appealing.
Esdeath’s love for Tatsumi shows me that, despite her strength, she is very feminine and is especially cute and vulnerable at times.  Her loyalty and willingness to try and convince Tatsumi to join the empire’s side to be with her proves that she will compromise for her lover if need be.  Someone as strong as Esdeath generally does not have anyone opposing them because they are afraid of losing their lives, for someone to openly oppose what she wants and her trying desperately to find a way to make it work shows how powerful her emotions are.
She is so appealing to me because of her devotion to Tatsumi alone.  Despite him rejecting her offers of joining the empire, even if he vowed to stay with Night Raid to continue fighting against them, even if he told her he already had someone whom he was in love with, she never changed her feelings or emotions for him.  People like Esdeath, in that respect, is very hard to come by.  You will typically have someone who will claim that they love you and need you, yet when things go wrong or you do not agree with certain things as they would like, you suddenly find yourself replaced or given the cold shoulder.  Tatsumi, since him and Esdeath’s meeting, managed to escape and run away multiple times from her, yet she stayed the course to make him her’s.  You just do not see this type of dedication anymore.
Honestly, Esdeath is a woman whom I would definitely date because of her power and sadism, yet would grow to love because of her devotion and caring nature to someone whom she admires.  She seems like a woman who is defined by her strength and ambition, yet will willingly submit to the one she cares for and show them that they mean the world to her.  Despite being a bit yandere, she is definitely a fine choice for this Waifu Crush Wednesday!
SHARE:
RATE: