A group of five boys transfer into a Hachimitsu Private Academy, a school which was an all-girl’s school until a change in chairman took place.  The chairman changed the school’s policy and are now allowing male students to be admitted, leading to the transfer of our five male protagonists.   The reason that they transferred was mainly because the female-to-male ratio happens to be 200:1 as of current!  Morokuzu Takehito (Gakuto), Wakamoto Shingo (Shingo), Fujino Kiyoshi (Kiyoshi), Nezu Jouji (Joe), and Andou Reiji (Andre) feel as though this will be a great opportunity for them.
However, devious schemes and plans lead the group awry, and upon being caught are now subject to the punishments of the “Undeground Student Council”; a group of women (Midorikawa Hana, Shiraki Meiko, and Mari “the crowmaster”) whom credit themselves with keeping illicit sexual activities under control at the school.  Their sentence is one month.  Will the group be able to survive?  Will Kiyoshi ever get to have a chance with Chiyo-chan? 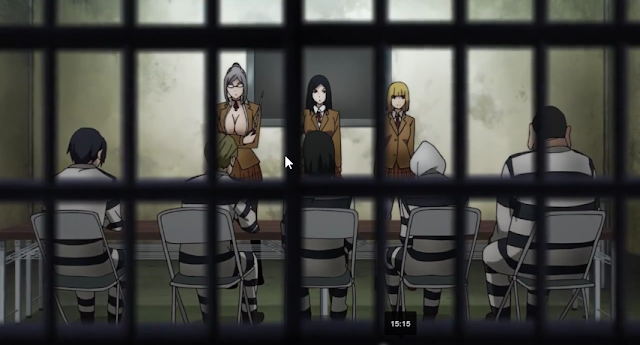 I want to say something from the forefront, I think that Prison School is absolutely AMAZING just from this first episode!  They did a very good job of providing perverted humor, heart-stopping moments which got your adrenaline flowing, and providing an unbelievable premise to keep the viewer guessing, “What the hell is happening next?!”.  From the very beginning this anime has made its intentions known and to see it follow through with those ambitions from the onset is immaculate.

The characters within prison school seem to each have their own personality, and they are all able to immediately jump out and grab you because of the eccentric nature that each possesses.  Kiyoshi, who seems to be the main male character, is the most normal one of the bunch and seems to be subject to the same punishment as everyone else because he allowed himself to succumb to peer pressure, unintentionally getting wrapped up in the pace of everyone else.  There is a wide conflict between him and the rest of the guys, as he can relate to them because he is also starved for female attention, but he seems to be prideful enough not to give into any woman simply because of their sex appeal.
The artwork for Prison School kind of reminds me of the same artwork style that we have seen in Shin Megami Tensei: Persona games, especially when it has to do with the gradient-style coloring.  I feel maybe that somewhere down the line they happened to be inspired by the techniques used in shading the Persona games or Persona: The Animation anime and brought it over to Prison School.
Something else I foresee is the wide amount of sexual fan service we will experience down the line.  Busty dominatrix style characters, yandere females who urinate in public, and sneaking to peek on girls bathing seem to be adding up into one hell of a perverted comedy (which happens to be one of my favorite genre).  While I do not know how extreme they will go with it, I am willing to bet that it is something that will possibly make me more than a little uncomfortable at times, and I think I will be all right with that.
Prison School’s first episode was awesome.  I want to really thank my friend Bianca for recommending it to me, and I am hoping that the entire series provides just as much character as this first episode did.  It was gut-wrenching, it was funny, it was straight-forward and honest with everything and I was not in the least disappointed.  I cannot wait until I finish out this season and are able to give you a review of the entire thing!  Hopefully things do not let up.
SHARE:
RATE: