Waifu Crush Wednesday is modeled after the popular “#WCW” or “Women Crush Wednesday”.  This bi-weekly editorial focuses upon female characters in gaming, anime, and manga that I happen to like in one form or another.  I will do my best to explain my affinity for the character featured here.

Honnouji Academy bows down to one absolute ruler, Satsuki Kiryuuin.  I feel that she was the strongest female character within the Kill la Kill anime and it was all because of her mental fortitude and absolute belief in the cause she stood for.  Originally my favorite KLK character was Mako Mankanshoku, yet the more I thought about the anime, the more I realized that I really like Satsuki more than all the others.  Ironically, Satsuki’s personaltiy and Mako’s are pretty much mirror opposites of each other, so there might be something more to look into regarding my own preferences, but more on that after the jump! 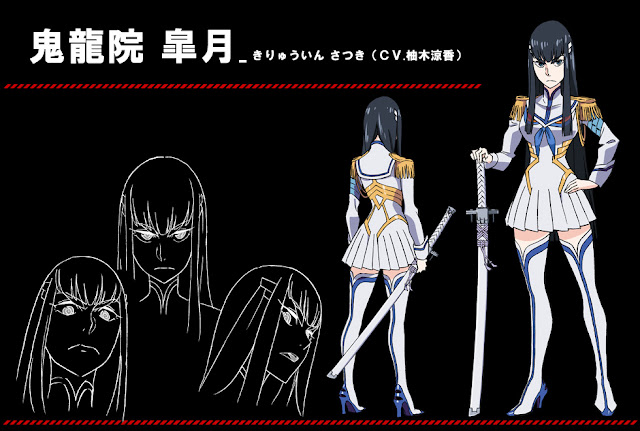 Satsuki Kiryuuin is one of the main characters from the anime Kill la Kill, the most recent blockbuster anime from “Gainax”, the same anime studio which brought us Furi Kuri and Tengen Toppa Gurren Lagann.  She acts as the Student Council President of Honnouji Academy, directing all of the student body to her will.  She is a powerful and imposing character that can come off as being put on a pedestal, because she is.  She has absolute confidence in her ability to rule and that shines through in everything that she does.
Something that Satsuki has that I am attractive to is her attitude that seems infectious to everyone around her.  She places herself on a pedestal and others rightfully accept that.  She has a personality that appears to be larger than life and nearly impenetrable when it comes to infiltrating her emotions.  She lets her agenda be known, proudly proclaims that she has no shame if it means attaining her goals, and she has absolute faith in the cause that she fights for.   She is headstrong with a mind of her own and everyone rallies behind her because she has so much self-confidence that even her weaknesses appear to be anything but.

Women like this are really the bane of my existence since it is hard to figure them out, but since I find most people easy to figure out, that unknown factor is very appealing.  I love having to figure out what someone is thinking, doing, what their next plan of action will be and if they have any ulterior motives.  Anyone straight forward and direct seems to get boring fairly quickly because I am not someone who is easily entertained by one-dimensional people (unless I have a special affinity for them).  This generally leads to self-ruin since I will badly judge their actions to one extreme or the other and normally misconstrue things that are simple in manner, but whether I am right or wrong for doing that is what make sit a thrill to begin with.

Throughout the course of Kill la Kill I believed that my favorite character was Mako Mankanshoku, but by the end it happened to be Satsuki.  There is something about women who are not afraid to get dirty for their ideals and assume a dominant role that is absolutely attractive.  I think it is because when they go out of their way to perform an action, you know it is because they want to do something and they care because it is not in their normal personality to do such things… therefore it magnifies the feelings from their act a thousand fold.  This could also just hint back to myself and how I am an overly affectionate person and want to feel that someone is doing something not out of pity, not out of sympathy or necessity, but of their own free will.

To finalize things, I feel she is the best thing to come out of Kill la Kill, but that is probably just my bias talking.  The only thing I really did not care for with Satsuki is the haircut she got at the end of the series (I think she looks better with long hair), and I do not really see her as a woman that would wear a dress socially, probably more along the lines of pantsuits, but the feminity shown is still attractive.