Thorn was a weapon that many cried needed to be buffed after feeling like it provided little to no incentive to be an exotic primary.  Bungie replied back by giving it some buffs that would make it a better weapon, however, I felt like they took things a bit too far…especially when I thought that Thorn was perfectly fine how it was to begin with.

This article is going to be directed as to why I feel like Thorn is entirely too good of a weapon at this point and time and why it needs to be reverted back to how it was before Bungie decided it to was time to tinker with its stats. 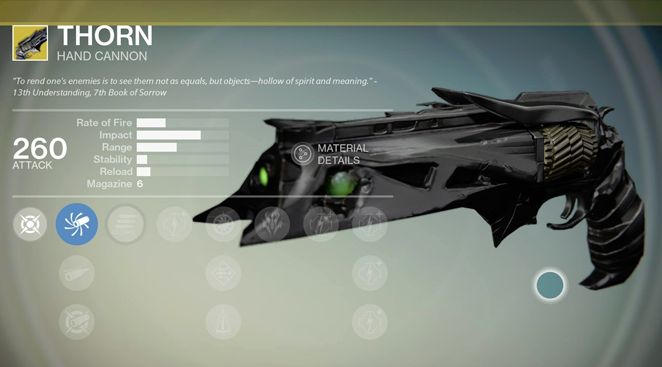 Thorn itself is an exotic hand cannon which fires out thorns instead of normal bullets.  The special effect of this weapon “Mark of the Devourer”, allows it to penetrate shields and cause damage over time to enemies.

Thorn is obtained from completing an exotic bounty known as “A Light in the Dark“.  This particular exotic bounty  was known as one of the most difficult of those existing because it tested your mettle in both The Crucible (PvP) and the Story (PvE).  The two main trials consisted of racking up points in The Crucible using only void damage and doing a special version of the “The Summoning Pits” strike on the Moon (Which happens to be the one of the last steps in obtaining the weapon).

Reasons That Thorn Should Not Have Been Buffed 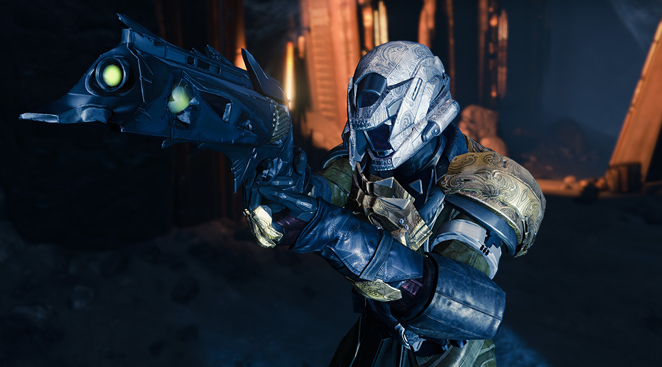 Bungie has said that “Exotic Weapons are designed to look, feel, and sound overpowered. At the same time, they are not supposed to break the balance of the game. (Source Here)”, yet this weapon is now approaching the boundary where it is doing just that.  Thorn is now what I consider to be overpowered.  The main problem I have with this gun is that it was borderline overpowered to begin with and it did not need the buffs that were bestowed upon it.  What we have here is a classic case of catering to the whining babies who do not want to learn to master a weapon to unlock its potential, rather they want it handed to them on a silver plate.  Bungie listened to all those who whined and complained about the usefulness of this weapon without first understanding the ways in which it excelled.
Thorn was not a gun that was meant for everyone, rather it was a weapon that revealed its power to those who could wield it with deadly accuracy.  Thorn originally had a 6-shot chamber, ridiculous kickback after every shot, and a 2.5 second reload speed.  However, Thorn killed in just two head shots, burned opponents which allowed for kills as long as they were shot while at certain health (meaning easy postmortem kills) and delayed the opponent from regenerating their shields/health, and it even allows you to temporarily distort your foes vision after a bullet connects.  The sheer power that this weapon possesses made it deadly in The Crucible and an even match against beasts like the Vex Mythoclast and Suros Regime, but it took a particular set of skills to be able to use efficiently.  I was one of the people that realized what type of weapon it was and learned to account for the drawbacks the gun provided, it seemed fair that something this powerful came with negatives.
Buffs have now made it one of the most brain-dead weapons in the entire game.  Barely any recoil it feels like, enhanced “Mark of the Devourer” damage effect over time, a 9-shot chamber, faster reload speed, etc.  This has made the gun entirely too broken.  This weapon did not need all these additional buffs, now anyone can use it without mastering it and those of us who mastered it before (like myself), are only even more prominent.  Thorn also is acquired by an exotic bounty which anyone can get, and since you can buy your way to level 31 now without even having to go through The Vault of Glass Raid (thanks Bungie), anyone should find it easy to get through the PvE portion.
In conclusion, Thorn is now an exotic weapon that is too easy to acquire, too easy to kill with, and too overpowered in general.  I would like changes made to return my favorite weapon to a skill-based one, where only the most dedicated will have their uses out of it.  Unlike Bad Juju, this weapon only took a bit of getting use to in order to see its potency, but now everyone has complained and it is becoming one of the most overused weapons in the entire game because of the ease-of-access and strengths that it boasts.  Unless something is done, the parade of this hand cannon will only continue to grow as more people begin to realize how ridiculous it is.
SHARE:
RATE:

Anthem | Worries After the Demo