Top 5 Tuesdays is an article series that focuses on my “top five” anything on a given subject of my choosing that pertains to either gaming, anime, or manga.
With the release of Super Smash Bros. for 3DS, I have gotten in ample time playing the game (Already I have over 500 matches, and that is with me keeping up the website, working on my daily Destiny missions, and just random goofing off!).  It should be obvious that since I have been playing and trying out characters that I have developed favorites, and that is what this is about.
Go ahead and hit the jump and find out who are the top 5 characters that I am enjoying currently in Super Smash Bros. for 3DS!
SPOILER WARNING!   – Among those listed, a few are secret characters that have to be unlocked by playing certain modes and meeting certain conditions, or by playing a certain number of battles.  If you are uninterested in being spoiled, please do not read.

I‘ve had a long history with the Super Smash Bros. series, spanning all the way to the original on Nintendo 64.  I really got competitive with the series with Super Smash Bros. Melee on the Nintendo Gamecube and Super Smash Bros. Brawl on the Nintendo Wii, even entering tournaments.  I have always chosen to play as characters whom I thought were cool and who I enjoyed playing.  I never was one to care for “tiers” and “match-ups”, I just did what I had to do and if I could not win, I adapted.  Just playing this game I can already tell that some characters could be considered in a different class than others, but again, I will only play those whom I really want to play, this mindset has lead me to currently favorite some over others.  I will list them here in ascending order. 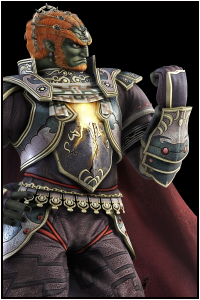 Ganondorf is the familiar antagonist of “The Legend of Zelda” series, this incarnation of him was first introduced to me during his appearance in “The Legend of Zelda: Ocarina of Time“.
I really like this character because, while he is probably universally agreed upon as being the WORST character in Super Smash Bros. for 3DS, he’s just insanely fun to play.  I like how powerful he appears to be and that his moves have a lot of force behind them (Not to mention that “WE ARE SPARTA!” forward tilt that he has).

Something I am still not too fond of is that he still appears to be more-or-less a Captain Falcon clone.  I wish he was given more unique qualities, kind of like Toon Link compared to Link or Luigi as compared to Mario, but I feel the unique properties on his moves does enough to make him stand out from his counterpart.  Another minor gripe I have is that his color palettes are not all that appealing, I wish we had more of a deep red or a solid black. 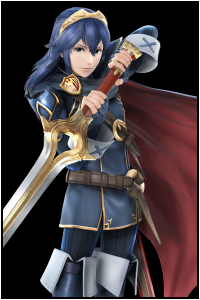 Lucina is from the game series “Fire Emblem“, first making her debut in the Nintendo 3DS title “Fire Emblem: Awakening“.  She is the “future” daughter of the protagonist, Chrom.
Lucina is more-or-less a clone of Marth, however, she has some different properties that make her different in how she handles.  To be quite honest, I am not really sure how all she differentiates from Marth besides the fact that it seems that her blade does not have to connect at the tip to do severe damage and knockback, unlike her counterpart’s.  I picked this character because I have always liked Marth’s general play style because it is the closest thing in the game to Roy (Also a Fire Emblem character and was in Super Smash Bros. Melee).  Also, I really love that she looks so cool, I love playing female characters with impressive armor.
The only thing I hate about playing Lucina is she honestly feels like a waste of space, I would have preferred Roy if we were going to get a Marth clone.
[   #3 – Samus   ] 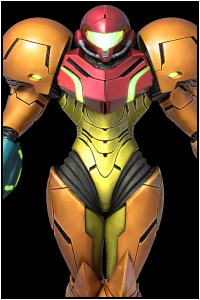 Samus is the protagonist of the game series known as “Metroid“.  She is one of the original Super Smash Bros. veterans and actually appears in every single iteration of the game series.
To be truthfully honest, I feel like this is the WORST version of Samus across any of the other games, primarily because of her weakened bomb jump, changed neutral air, and lack of “missle cancelling“.  However, even with all of these I find her to be extremely fun and actually good at handling a number of situations in the game because of how the game is played.  I feel like having an improved tether grab, shoulder charge, and having her Screw Attack be a kill move, she can handle a lot of threats.
The only thing I would really suggest for Samus if they do not want to give her back Missile Cancelling, is changing her neutral air back to what it has been.  Why does she need her N-Air to hit in front of her AND behind her when she has a Back Air that already attacks foes at her back?
[   #2 – Zelda   ] 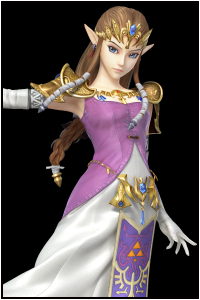 Zelda is from the video game series named after her, “The Legend of Zelda“.  Another odd fact about her is that she is actually Sheik, meaning that Zelda is also a ninja.
Zelda has always been my favorite Nintendo princess, but she has always been severely under-powered when it comes to the Super Smash Bros. series, even though she is probably the princess with the most actual battle experience out of all of them (Rosalina, Peach, Daisy, etc.).  She’s fairly slow with powerful attacks, but I feel that their power justifies just how slow and awkward she is to use at times.  Her forward air has to be “sweet spotted”, and even then it can take a high percentage to score a K.O. in Smash 3DS because of the far-to-reach blast zones.
Somethings I really like about Zelda though, is that her down tilt can combo into a forward smash, her up tilt can combo into an up smash, and (with some prediction), her down throw an combo into her up+b and kill a foe.
[   #1 – Shulk   ] 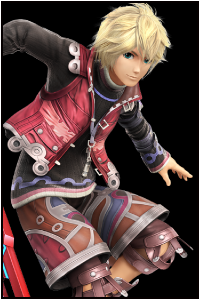 Shulk is the protagonist of the game “Xenoblade“, he wields the “Monado”, a sword which grants him different abilities and allows him to see “visions” of the future that he can change through decisive action.  Shulk is the character who gave me my initial hype for Super Smash Bros. for Wii U and 3DS because of his trailer.  He just seemed to be extremely cool because of his unique abilities that enhances what he is able to do (While debuffing other stats of course), the great music also helped too.
Shulk is my current “main” and happens to also be the person I am best with.  I find that his range on most of his attacks can be debilitating, and he can deal with a wide variety of opponents due to the different properties that his Monado Arts possess.  However, he also has a crazy amount of lag on his aerial moves which allows him to be easily shield grabbed, he also has less viable combos compared to the current top tier characters (Sheik, Greninja, etc.).  Regardless of his set backs, I like him enough to try and maximize his advantages while minimizing his weaknesses.
SHARE:
RATE: