BlazBlue: Chrono Phantasma is the most recent IP entry into the game series known as “BlazBlue“.  I was pleasantly surprised and amused once I found out about “BlazBlue: Clone Phantasma” coming out for the Nintendo 3DS and I knew I had to get my hands on it to review.  Being a dedicated fan of the original fighting game series, I figured that this was going to be hilarious because it reminded me of one of the “Gag Endings” in BlazBlue’s Story Mode but with chibi’s present in the omakes of “Teach Me!, Miss Litchi!” and “Help Me Professor Kokonoe!”.
This is going to be my review telling you whether-or-not this game is worth the asking price.  Go ahead and hit the jump to check out the comprehensive review.
Game Modes 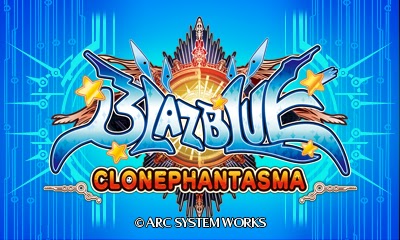 Story Mode – In this mode, you play through any one character’s story.  You progress through the story by clearing stages.  If your lives reach 0, it’s Game Over, and the continue screen will be displayed.  If you clear all the stages, you get to see the Ending Illustration.  After you’ve seen them once, Ending Illustrations can be viewed again at any time from the Gallery.
Challenge Mode – In this mode, you compete to knock as many enemies off the stage as possible, before you fall from the stage yourself.  As the number of enemies you have knocked off goes up, the enemies that appear will gradually grow stronger and stronger, and the number of enemies appearing at once will also increase.
Gallery – You have three different things (Illustrations, Awards, and Credits) to choose from when you select the “Gallery” mode.  Illustrations allow you to view previously seen Ending Illustrations, Awards allows you to check awards that you have unlocked (Which are more-or-less like Xbox’s Achievements or Playstation’s Trophies), and Credits will play the ending credits.
Options – You have four different things (BGM Volume, Voice Volume, SFX Volume, and Surround Sound Settings) to choose from when you select “Options”.  BGM Volume Settings allow you to adjust the volume of the in-game background music, Voice Volume Settings allow you to adjust the volume of the in-game character voices, SFX Volume Settings allow the adjustment of the in-game sound effects, and finally Surround Sound Settings will allow you to turn surround sound on or off.
How to Play and Combat 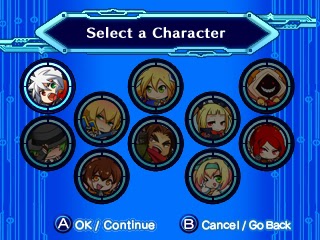 You will pick from one of 10 characters that are available no matter which made you go to.  There characters you have available to pick from are (Going top to bottom starting from the left): Ragna the Bloodedge, Hazama, Jin Kisaragi, Makoto Nanaya, Noel Vermillion, Bang Shishigami, Rachel Alucard, Platinum the Trinity, Taokaka, and Izayoi.  I find it funny because out of all the selectable characters only one of them is a newcomer to BlazBlue: Chrono Phantasma (Izayoi).  You would think other characters like Bullet, Azrael, and Amane would also be available to play.
Controls – The controls are rather simple and very easy, more reminiscent of BlazBlue’s “Stylish” mode for beginners in the actual core game, not that that is a bad thing.  The only problem is I wish there was something a bit more complex to choose from and I did expect more since Ark System Works was responsible for Guilty Gear 2: Overture, and that game was 3D and carried enough weight to further the story going into Guilty Gear Xrd -SIGN-.
A – Normal Attack.
B – Jump.
X – Drive.
Y – Blast Drive
R – Camera Zoom-In.
L – Camera Zoom-Out.
Start – Open Pause Menu.

Combat – The combat in the game is very simple.  You hit characters and they build up damage (Well, they are able to be knocked further back) and knocking them off of the stage wins, this is also not hard since your Normal Attack is just mashing A over and over again.  If you get hit enough or use your “Blast Drive” you will build up levels, allowing you to unleash a powered-up Drive and Blast Drive but you will get knocked back a lot more and your Blast Drive will stun you.

There is one other thing that I would like to bring up about the combat, Items.  The items within the game can both help you and hinder you in certain cases.  Examples of items being helpful are  Litchi-Faye Ling’s panda hair accessory which will give you the ability to use unlimited Blast Drive’s without the stun penalty and rabbit ears which grant you a double jump.  Examples of bad items are the bomb which will stun you along with all enemies in the air and Arakune’s mask which will slow your speed down.  I have absolutely no idea why you are given items which will purposely hinder you, makes absolutely no sense, especially when it is very easy to avoid them because you see what you are about to pick up.

In all honesty, the combat is way too simple for my tastes.  It is basically a button masher with no real strategy, and there is not many combos you can use/make even if you throw you drive into the game along with that combo.  I would have liked it if they at least attempted to make new combos by delaying button presses or mixing in your drive at certain times to perform certain moves and keep the combo going (Which is what they could have did with challenge mode).  Quite honestly, some people’s drives like Hazama is not all that useful, while some like Makoto are really good.  There are lots of places that they could have been more creative in, I just feel like they missed a good opportunity.

Story Mode and Challenge Mode Impressions
This section is going to be me going over the Story and Challenge Modes, describing what each of them entails and how well they were executed.  Normally I would have separate sections for different modes to elaborate as best as I can, but since this is such a compact game I can do it all here without being too wordy.
Story Mode 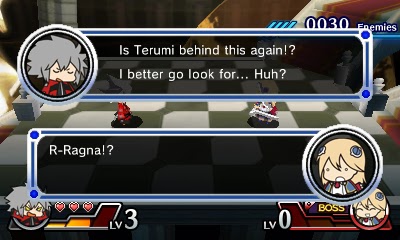 Story Mode is basically the character you choose finding out that something has happened where clones (Of all the characters in the game) are on the rampage, to which they resolve to find out what is happening one way or another.  Your character has to defeat a certain amount of clones per area in order to advance until they meet up with other non-clone main characters and have a dialogue with them, only to fight them in a boss battle.  This trend repeats three times until the game is cleared.
I feel like the Story Mode in this game is done extremely lazy, nothing reminiscent of the amazing Story Mode that we have seen in “core” BlazBlue games, feels hastily done.  I say this because there are no branching paths for the characters and all the dialogue is extremely short, the way in which they talk (In the little circles with appearing text) is more characteristic of the core game’s Arcade Mode than Story Mode (Where there is one dialogue box at the bottom and character portraits instead) .  I find this to be a major let down because, while I have always loved BlazBlue’s fighting (because fighting is my main game preference), I was always more intrigue by the intricacy of the story.  Longer dialogue, different paths, and making it where you actually could “Investigate” the true cause of the clones would have been made for a better story experience.
Challenge Mode 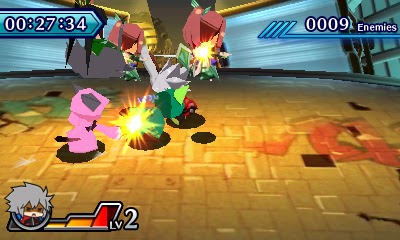 Challenge Mode was named because of the core games counterpart, however, they are nothing alike.  In the core game “Challenge Mode” would force the player to perform increasingly difficult moves and combos for any particular character to better learn them as well as show their potential.  Here we have nothing more than a survival mode that uses the same name (Should have just been named “Survival Mode”).  I would feel this is an excellent mode to have if the combat system itself were not so simple and repetitive (See section above labeled “How to Play”).  However, this mode does exactly what a survival mode should and allows you to kill a lot of time if you do enjoy the combat that you find in story mode.

NO!  AVOID THIS GAME!

Got to admit that I am heavily disappointed by what Ark System Works did with the development on this title.  Compared to their normally fleshed out Story Mode, we got nothing but a huge sack of disappointment.  Despite their previous drives with 3D games and their excellent combat system across a variety of games, we are left with repetitive movesets and even more repetitive combat.   BlazBlue was originally suppose to be a Japanese Role-Playing Game before it was decided to also become a fighting game, if they are going to make a Nintendo 3DS game that is not a core fighter, they might want to stick to that route instead.

Personally, I feel like maybe they are attempting to make money off of the core BlazBlue fanbase by taking advantage of the success of BlazBlue: Chrono Phantasma, the increasing popularity it gained from the series anime adaption “BlazBlue: Alter Memory“, and the ongoing manga which is titled “BlazBlue: Remix Heart“.  Quite honestly I really do not have any other idea why they want label this as a BlazBlue game and think it was good enough for their fans and consumers besides the fact that they know people will pay money for this IP.  Whatever they were thinking needs to be addressed so they do not put out something like this again, I was both disappointed and awe stricken by something I thought was going to be yet aother fun-filled experience into the world of BlazBlue.