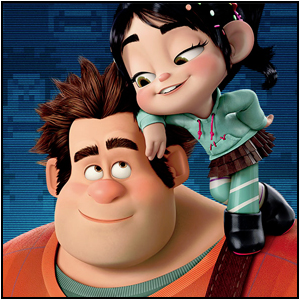 Okay, all right.  I know that I do not normally cover movies unless they are anime-related, however this one focuses upon gaming which is one of the three pillars that this site was founded upon, I had to do it.

WRECK-IT RALPH was a must watch for me the minute that it was announced; making it a “must watch” should come as no surprise since it focuses on the life of a video game character and features guest cameos by popular gaming characters.
Going to see this movie I had different feelings throughout and came to a final decision about how I feel about the movie towards the end of it, so, without further delay, I give you my review of Disney’s WRECK-IT RALPH!

The plot of WRECK-IT RALPH is a fairly simple one.  Ralph is the “Bad Guy” in his video game (Fix-It Felix Jr.) and is sick-and-tired of being treated second-rate with second-rate accommodations because of it.  RALPH, for 30 years, has had to endure sleeping on the bricks of the building he has to wreck everyday for work, being treated as an outcast by his fellow game characters (Even so far as to not invite him to the 30 year anniversary party), but most of all he did not feel at all appreciated for doing what he was programmed to do.
In order to get the respect he deserves and make a better life he heads off in search of a medal to prove he is just as valuable as any “Good Guy” character, but not everything goes according to plan.  Ralph  is soon pulled into a whirlwind of events with fellow characters Fix-It Felix Jr, Venellope Von Schweetz, Sgt. Tamora Jean Colhoun, and others.  Ralph has to come to terms with being himself and take pride in his job, realizing that being a “Bad Guy” does not make him a bad guy, and that maybe being a “Bad Guy” is actually pretty good.

Coming into the theater to watch this movie I had mixed feelings; make no mistake, I wanted to see WRECK-IT RALPH from day one but I was a little worried about how it would pan out.  Disney and Pixar have made some great animated movies in the past, but often movies (Even animated movies) surrounding anything related to video games seemed to be nothing short of  a disappointment when they hit the big screen (No idea if this is because of my knowledge as a hardcore gamer, poor writing and directing, lack of homage to the original, or simply a mix of all three).  However, seeing that they created a game (Fix-It Felix Jr.) and all the characters in it means I would focus entirely on the plot without worrying about how much they deviated from the original game the movie was based on (Such as movies like Resident Evil and Street Fighter: The Legend of Chun-Li).  I was pleasantly surprised that the movie was actually good.
First off, I would like to say how the story itself was presented.  The story of WRECK-IT RALPH progresses at an easy enough pace to where anyone will be able to follow what is going on easily without any “Huh?!” moments as it begins to deliver plot twist after plot twists in order to make you say “Huh?!”, but in a good way.  I feel like they do a good job balancing the serious aspects of the story with comedy relief, especially the whimsical relationship of Sgt. Colhoun and Fix-It Felix Jr.  The beauty of this is that you feel closer to the characters and can relate more during the serious scenes that express their pains and ambitions, while you are forced to laugh at the humor they provide later on to lighten the mood for a effect reset on the serious situations later.  The story is very predictable towards the very end because it is a feel good movie, but even knowing that is not enough to destroy the angst caused by watching.

Also in WRECK-IT RALPH, they make it very easy to sympathize with the two main characters, Ralph and Vanellope Von Schweetz.  Throughout the story you see exactly why they are doing what they are doing in order to feel like they belong and what drives their desire to be accepted and appreciated by the peers of their game.  The passion behind what drives Ralph and Vanellope bring about scenes that really stir-up the raw emotion into you, especially on a few of the later scenes concerning the interaction between the two.

I believe the main characters are presented well doing the movie.  Ralph comes off as a true hero during the end and opens my eyes to the theory that a “Bad Guy” may not be a bad guy; however, believed they could have  did better to showcase Ralph’s wrecking ability by giving him some additional powers or simply creating additional scenes to use it.  Vanellope was energetic and fun the entire movie, and although she was serious, she did not seem to have as much of an impact on me as Ralph did, in fact, I felt more sympathy towards her situation only after it was acknowledged by Ralph.

The supporting characters are all pretty well done in what they are suppose to do.  But Fix-It Felix Jr.’s relationship with Colhoun is the supporting highlight of the movie.  Both Fix-It Felix Jr. and Sgt.Colhoun act as the deuteragonists and give more comedy relief than everyone else, it was actually quite refreshing and I loved the humor.  The rest of the cast, such as the residents of the penthouse inside of Ralph’s game, and the various cameos by other characters did not effect too much (Though, I did enjoy the names of the Go-Kart racers in the game “Sugar Rush”); however, the antagonist of the game did his part well enough to make you root against him but his performance was, all-in-all, a bit lack luster especially at the end of the movie.

Honestly, the only reason I went to go see this movie was because it was a animated movie about a video game character that featured appearances by other well known characters (Those I recognized in the movie were Sonic the Hedgehog, Dr. Robotnik, Ryu, Ken, Cammy, White, Zangief, Chun-Li, M. Bison, Q-Bert, Pac-man and the Ghosts, Bowser, and Kano.  They even made mentions to other characters such as when Ralph was looking through the lost and found, pulling out the exclamation point from Metal Gear Solid and a Mushroom from the Super Mario Series.  At one point we even see use of the “Konami Code” that was entered on a NES controller.  Also, early in the move, there are also various games we see at their that we see everyday in real life, such as Dance Dance Revolution and Super Street Fighter II.

Something else that seemed to be inspired were some of the locales that WRECK-IT RALPH takes place in.  The “Hero’s Duty” name reminds me a lot like “Call of Duty“, however, the level itself reminded me a lot like Resistance: Fall of Man, with the main character of that series “Sgt. Colhoun” whose appearance reminded me a lot like Anya Stroud from Gears of War (And her weapon reminded me a lot like Gears of War‘s “Longshot” and folded out similar to a Promethean weapon from Halo 4).  Sugar Rush video game reminded me quite a lot of Mario Kart for the simple reason they had arrows on the ground to boost speed, you had multi-colored boxers pick up in order to obtain items (One of the missile pick-ups that King Candy had reminded me of the triple red homing shell from Mario Kart 64), even had a shortcut that strangely resembled the track “Rainbow Road”.

Also, during the very end of the movie before the final ending credits, you see various other references to popular video games: Ralph and Vanellope are helping with the “Break the Car!” bonus stage from Street Fighter II, Sonic the Hedgehog runs through a loop which seems to be Chemical Plant Zone from Sonic the Hedgehog 2, and Ralph, Vanellope, Fix-It Felix Jr., and Sgt. Colhoun grab medals and go down through a pipe which is similar to what you will find in Super Mario 1.

The big thing about this movie is that someone who is not into video games or arcade games will probably miss out in quite a lot of “hidden” game humor besides the obvious things.  I thoroughly enjoyed how much they appealed to gamers by including an awful lot of similarities and references to already established gaming greats.

This movie is a bit slow at spots but overall it is an enjoyable experience and I am happy with the decision to go and watch it.  The movie generated the right amount of emotions at the right times and had a very unexpected plot twist at the very end of the movie that makes you go “Ugh!” because it was so obvious but so well-hidden that you can do nothing but applaud it (You will know what I am talking about).  The story was actually pretty well-done and draws you into it the more it goes along and you cannot help but celebrate Ralph.  The characters can be delightful and you begin to find yourself entangled within the multiple aspects of each personality, all while wondering how they will solve the catastrophe that Ralph’s wish to change his and Vanellope’s destinies pan out.

The only thing that probably completely saddens me about this movie is the fact that the Arcade scene here in the United States is all but dead except for a few places that still support the fighting game scene (All because we are in the generation of the home gaming consoles).

WRECK-IT RALPH is an excellent movie and I would encourage ANYONE who loves video games to go and see it at least once, you will not be disappointed.