Titanfall was the whole reason that I got an Xbox One before a Playstation 4.  Being someone who absolutely loved anime, I grew up with awesome action of Gundam Wing, Macross (RoboTech), and Beast King GoLion (Voltron).  It was not a surprise to see an actual video game with these elements in mind would be incredibly fun to play.  Not only that, but pilots were incredibly mobile which means that the camping present in modern games would be less of a thing.

A few years later, we are introduced to a teaser for Titanfall 2 and I could not be more ecstatic!  After waiting a few months until June 1212,  we are finally greeted with some trailers that features in-game footage for both the campaign and multiplayer!  I was quite curious to see what they had for all the fans who loved the original game.

Hit the jump to check out my opinions on both trailers.

Back in the original Titanfall, many people complained that there was not an offline, standalone, single-player campaign.  Many were impressed by the innovation seen by Respawn Entertainment in how they reimagined the first-person shooter, but were annoyed that there was no lore to go with it.  If you look at the stats of how many people finish a single-player campaign for a FPS and how many do not, it is actually relatively low since many people happen to go directly to multiplayer first.  Also, many people who actually finish off the story never come back to it in order to relive it.  Most companies are beginning to see long single-players in FPS as an effectively way to spend huge chunks of money creating one-time-use scenarios and voice recordings since many will never play it as well as never replay it.

To be perfectly honest, many people said that they would not have cared in the least if it had a story or not if what they did show had been boring or unimaginative, but it seems as though everyone was particular interested with what was shown.  Everyone wanted to know more about this world.  How did The Frontier and the IMC come to be?  What are the details that lead to the conflict which prompted the use of a civil war amongst each other?  Seems we will finally get to see what happens within the world of Titanfall at last.

This trailer appears to be focus upon a rifleman pilot named “Jack Cooper”, who is either an ex-pilot or is an active one who has had his titan either destroyed or decommissioned.  It appears he met a Titan by the name “BT7274”, whose pilot was K.I.A. (Killed in Action) and decides that the smartest thing to do is to team up with this solo pilot to ensure both of their survivals while attempting to complete his mission.

I believe that this shows titans possess an A.I. capable of making logical decisions dependent on the data they have received.  BT7274 came across another pilot after his had been killed and realized that this person was not linked to a Titan.  Pilots and titans are both most effective when paired with each other, since an A.I. is only so smart and cannot process the most logical decisions for all scenarios and a human with instinct would maximize its potential and a human is no match without the power that a titan brings.  However, it also appears to be robots that are pilots as well, so I guess it depends on the way they are programmed.

It appears that Jack Cooper’s recently acquired titan was also talking to a ranking officer, possibly from dispatch, about the team up and explains that there was no other choice so he could not wait for authorization.  She then asks him “what are your protocols”, possibly to ensure that the artificial intelligence is working correctly on BT7274.  The response happens to be 3 things; Protocol One – Link to pilot, Protocol Two – Uphold the mission, Protocol Three – Protect the pilot.  The aforementioned link to Jack Cooper could have easily been caused by his second protocol to “uphold the mission” as he probably needed a pilot to see it through to completion.

From this trailer we can see the conflict between new residents of the frontier and the IMC are still going at it.  It seems we will see situations that show pilot fighting against pilots with and without their titans.  Spots were the titan will activate independent of its pilot, and times when your titan will aid you in fighting independently (such as the ending sequence which shows BT7274 throwing Jack Cooper towards a wall).  This story seems to be about a boy and his robot and how they must rely on each other in order to make sure that Jack does not die, that BT7274 does not end up in a junkyard, and that they can both move together in order to complete the mission that the titan’s original pilot was possibly tasked with.

The meat and potatoes to any first-person shooter is going to be its multiplayer and how it stacks up.  Since Titanfall first made its way onto the battlefront, we have seen many other franchises copy some of the traits which made this game so great (Call of Duty‘s latest iterations having a direct reflection of things we found in TF).  Since I had so much fun with the original Titanfall, I was hoping that Titanfall 2 would only ramp up everything that I loved from the first one…and it seems that it has.

The mobility options of the original game is one of the things that separate Titanfall from all the other shooters.  The fact we could pilot giants robots, but also be able to combat them without it made the game feel balanced whether-or-not you were within your giant mechanical partner.  It seems we are now getting the ability to slide (one of the things I was really hoping for out of this sequel), and we also have the ability to grappling hook to access things faster or to stop us from falling (you can save yourself from flying off the map without having to eject out of a titan!).  More mobility is always a good thing because that is the main aspect which separates the advantages of pilots vs titans; smaller size and high mobility versus bigger size and greater power.

Something else is that it seems like we will be getting more titans, and with that, more abilities.  I am not quite sure what all of them do, but we can be certain that some brand new ones exists because of the “core” symbols which appear at the bottom right-hand corner of the screen.  A few of the abilities shown features a laser which shoots out of the titans chest is reminiscent of Fulgore from Killer Instinct (the trailer even has the announcer saying, “laser core, ready”).  The ground pound seems like an instant kill which will be granted to one of the newer titans.  Not to mention we are seeing new executions, and one of the titans even appeared to have four arms instead of the normal two.

The pilot themselves also seem to have new abilities.  Grappling hook seems not like a mainstay feature, but rather it is an ability skill.  There also seems to be some type of new ability which replicates you, such as a dummy hologram, to trick players into thinking you are where you are not.  Finally, towards the end of the trailer, the pilot seems to have stopped in place while aiming in mid-air, allowing him to successfully kill an unaware opponent.  I am sure we will be seeing old favorites return, such as cloak, but I am unsure if they will be changed or enhanced from their original versions.  This time around it also seems like you can have two distinct abilities rather than just one, meaning you will be able to cause even more havoc than usual!

I also want to point out a few new grenades which were shown.  As you all know, we got to choose a grenade type during the previous Titanfall, and while there were four types (Arc grenades, arc mines, satchel charge, and frag grenades).  So far, the only one I saw within the trailer that is still available is the satchel charge.  One of the new symbols looks like a Japanese shuriken, but when thrown it seems to pool everyone together to make them easier to kill, kind of like Zarya’s “Ultimate” from OVERWATCH.  There was also something which gave off a sonar effect, kind of like Hanzo’s Sonic Arrow ability in OVERWATCH, which allows you to see enemies movements within its radius, even through walls.

The guns also seem to be different.  I do not recognize a lot of the guns shown here.  While we do have a few which seems like different versions of the R-101C Carbine and C.A.R. SMG, some of them appear to brand new, such as the shotgun (Which does not look like the original Titanfall‘s EVA-8).  The previous game had a relatively low weapon count; 10 main pilot weapons, 3 sidearm pilot weapons, 4 anti-titan weapons, and 6 titan weapons.  All-in-all, the game had 23 weapons, but people thought this was not much variety since they were split across four different categories.  I am sure that this game will aim to remedy that with greater variety and versatility in its weapon selection. 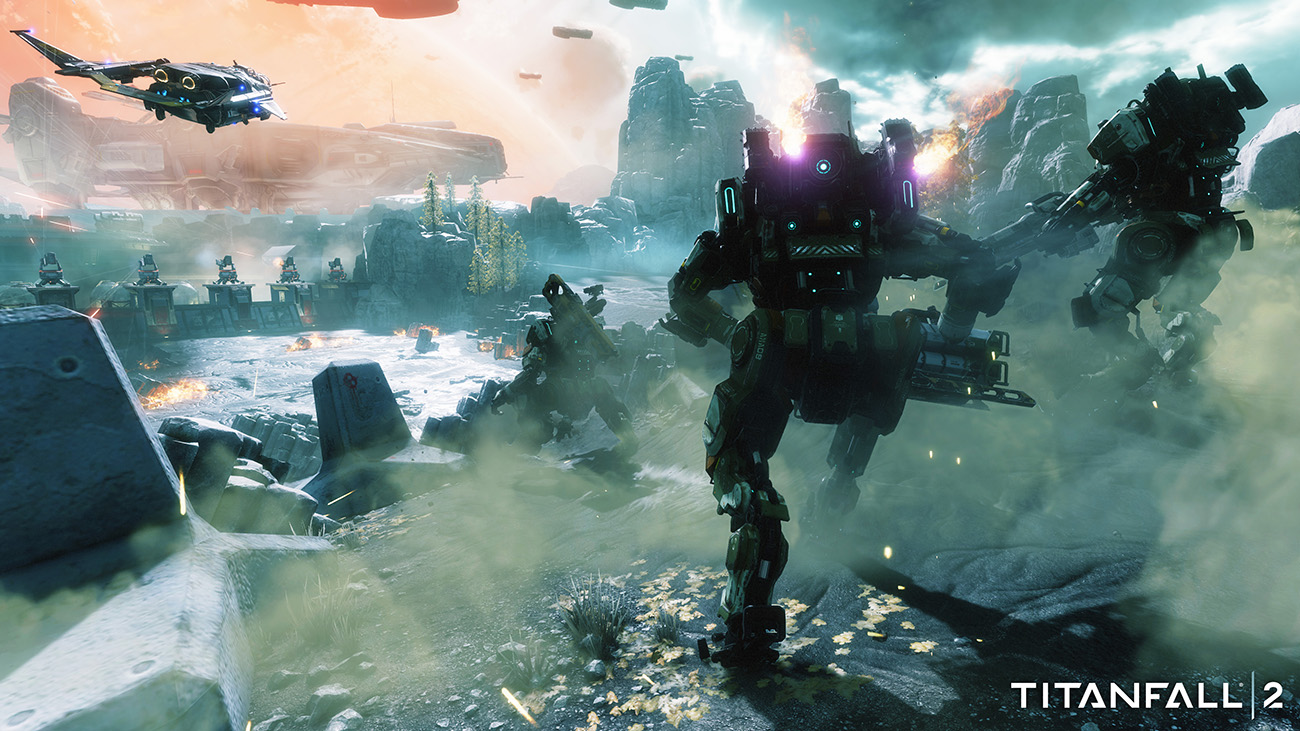 Overall, I am really looking forward to both modes for Titanfall 2.  The only thing I really wish is that multiplayer would be announced for the campaign, but I can see them not really caring about that since they tried something similar with the multiplayer campaign for the original game and it did not work out so well.  The new abilities sand grenades the pilots have are refreshing, I am excited about the new titans we have yet to see, and I am wondering what the story will tell (I am hoping it proves to be good, these are the original minds of Call of Duty: Modern Warfare).

Despite many people saying they are tired of the “futuristic” theme of first-person shooters, I believe most will welcome Titanfall since they have shaped an entire world around it that is not our own… and that is a breath of fresh-air compared to how people depict how earth will be in the future.  The only thing to do now is to sit there and wait until they give more details on when an open beta will be taking place!