Recently I have completed Shin Megami Tensei: Persona 4 the Golden on Playstation Vita.  I played this Japanese role-playing game for a couple of reasons: the first being that Shin Megami Tensei: Persona 5 was due out sometime this year and that Persona 4 was regarded as one of the greatest games of all-time.  I am now really wanting to view the anime since the game made a lasting impression upon me.
Fast forward to day, I have taken the first step of watching this fantastic anime.  You will see my impressions regarding everything below, even how it compares to the game that it was based off of.
[   1st Episode Impressions   ] 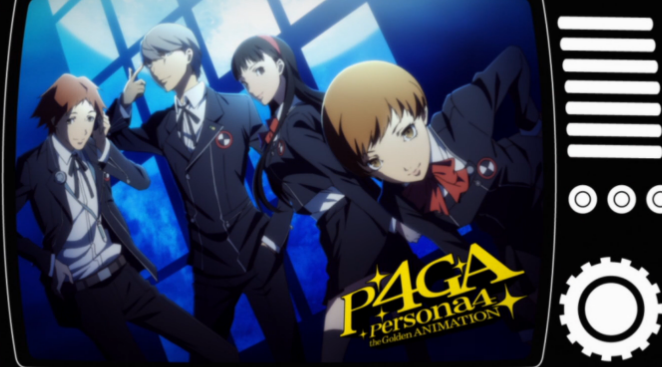 The animation of Persona 4 the Golden actually fits fairly well with how things began in the video game.  Yu Narukami (the main character whom you actually name), starts off within the velvet room and meets all the inhabitants and finds out his ominous future is tied directly to that room.  You also do the same things, such as meeting Dojima and his daughter Nanako, even stopping at the same gas station.  Not to mention that there are a few times where it shows Yu responding in a fashion which perfectly lines up with some of the gaming options (such as when Mr. Morooka introduced him to the class or him singing along to Junes’ theme song on television).  I guess we can view this as the “definitive” way of how Yu acts and the true story of all choices made within the Persona 4 universe.  However, I will say that, possibly for the sake of the anime, things are vastly accelerated compared to the video game.  Things happen at a much faster pace, you do not even see enough interaction between characters for them to develop their Social Links.  While that is not necessarily a bad thing this early on, the biggest achievement of the entire Shin Megami Tensei: Persona 4 the Golden game is how characters interact with each other and face their “true selves”.
The biggest impressions that I seemed to have got from the anime is, “I am glad that I played the video game before watching this”.  Those who do not play the Shin Megami Tensei: Persona 4 the Golden game will have a hard time making out exactly what is going on and why things are shaping up.  Things are progressing at a pace which feels more like a “synopsis” of the experience you have while playing the video game, which is appropriate, but it should have did more to elaborate on a few things to those whom may not have played the video game but instead wanted to watch the anime first.  To be more precise, they should have taken an episode just to establish the relationship between all characters, especially since Narukami just moved into town without knowing a soul who was present first.
The changes that we see within the anime are not all bad.  How Narukami first acquires his Persona is different and more dramatic than how the game shows it, but it was done in an impressive fashion that highlights him as the main character.  Things are similar enough to tag along and be impressed if you did happen to play the video game, and I guess in a way it was designed solely for that purpose.
A smaller note that people will have to deal with (that is not really a change per se) is that there is no “English Dub” for “Persona 4 the Golden ANIMATION“, it is only available in Japanese.  While many anime fans (including myself), prefer the original Japanese voices to anything that the western audience could hope to do with dubbing, Persona 4 actually has an incredible voice acting cast so it was quite a let down that it was not available.

Something else I want to point out is the music.  The music that was present within Shin Megami Tensei: Persona 4 the Golden is among the best I have ever heard for a video game original soundtrack.  To be perfectly honest, I stumbled upon a playlist for Persona 4 on YouTube a bit ago and have been listening to it ever since, even looking for a physical copy to buy.  The music within the video game is one of the sole reasons I wanted to play the game so badly, and I am glad that they kept the same tunes within the anime at pivotal moments.  Small attention to detail like this will keep fans of the games happy with the anime adaptation.

All-in-all, this is not a bad start to the first episode of Persona 4 the Golden ANIMATION, I just hope that things will be more fleshed out as things move along, especially since the little things are what makes the game so loved.
SHARE:
RATE: