Everyone had been talking about the over-the-top ecchi anime known as “Prison School”.  After a recommendation by a close friend of mine (Bianca-chan, of course), I decided that it was about time that I try to watch the anime to see what it entailed.  Needless to say, I finished the anime not long after that and I have compiled an elaborate review for your viewing pleasure.
You can catch the full article after the jump.  If you would also like a comparative point, feel free to check out my 1st Episode Impression for Prison School. 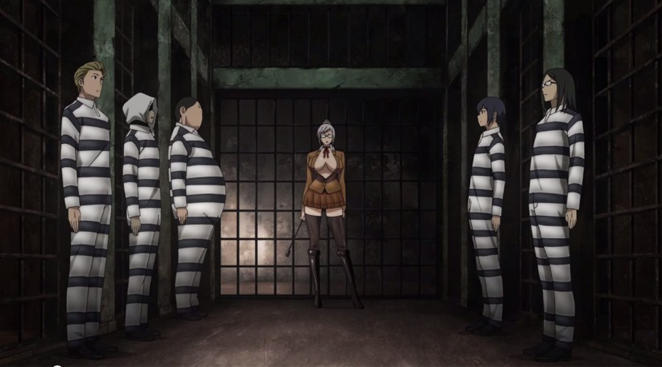 Prison School is primarily about how a group of guys get locked up in the special prison their high school has set up.  They get caught attempting to “peep” on the girls while they are taking a bath and are punished accordingly within the rules that the Underground Student Council has set up.  This anime has to do with Morokuzu Takehito (Gakuto), Wakamoto Shingo (Shingo), Fujino Kiyoshi (Kiyoshi), Nezu Jouji (Joe), Andou Reiji (Andre) and their experience while being prisoners within this special detention facility which is run and maintained by the Underground Student Council.

The plot in itself actually makes quite a bit of sense, with how the new chairman being a man would change the rules to allow guys in a previously all female school.  It also makes perfect sense why the boys would be in trouble when attempting to peep on the female students during their shower time.  However, what does not make sense is why there is a prison within the school itself and how something like that is ran by students and not by teachers or staff officials.  Then again, within Japanese society, they do a lot of things that the western world does not do in terms of schools.  Things like student councils figuring out budgets, opening and closing clubs, and making school-wide events is a normal thing to do.  Also, students clean their classrooms and the school itself.  With all of this in mind, it starts to feel less weird that students would have such authoritative privileges when it comes to handling students that are in need of reparation.
Despite the opening and the clear guilt of all the male students, they actually are the protagonists due to the actions experienced by the Underground Student Council members (Hana, Meiko, and Mari).  The anger of the Student Council President, Mari, at her father for being a lecherous old pervert has caused her to displace her anger at the boys whom currently inhabit the in-school prison of Hachimitsu Private Academy.  This has caused her and the others to begin working on a plan to effectively have them expelled from the school and return their academy back to its previous state of being a female-only learning facility.  This dynamic point creates the point-of-conflict since the boys themselves do not want to be expelled (both because the ratio of men to women at the school is 200:1, and they do not want to have to confront their parents about the reason they were kicked out of school).
I feel like the story in itself was executed quite well, having sufficient motivation for both the integration of male students into a previously all-female school and also having motive as to why the Underground Student Council wants their school to revert back to the way it once was.  I felt like the story’s pacing and progression was all timely and well managed, no episode felt like it did not serve a purpose.  Anime without fillers are quite a rarity, and Prison School feels like it uses every single episode to maximum effect for plot development.
[  Character Impressions  ] 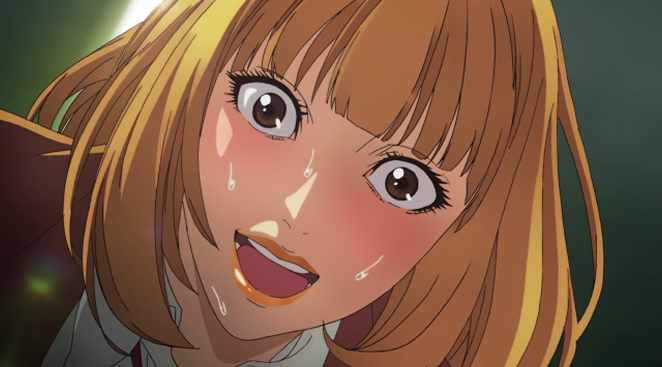 I really have to say, the characters that they presented within Prison School are very memorable.  While we do have some characters that I feel stand out more than others due to their eccentric and uncanny natures (Gakuto, Hana, and Andre), they build up everyone’s personality pretty well.  By giving characters their own little quirks and thought processes, we see a compelling cast that compliments each other well by their actions (the only character I find especially boring is the head of the Underground Student Council, Mari).  It also makes interactions between the imprisoned boys and the Underground Student Council girls hilarious and interesting.  I will go ahead and describe two personalities I think are incredible in this series, one for the boys and one for the girls.
For the boys, we have Gakuto.  This guy happens to be an absolutely fanatic of the “Romance of the Three Kingdoms” era in China.  Happens to be an excellent strategist and is loyal to a tee.  Then you have for the girls, Hana.  This girl is all about getting even and is a monster when it comes to hand-to-hand combat; easily the most memorable of the three Underground Student Council members in my opinion.  These are just small examples of the quirks and particular character traits which makes these personalities memorable and enjoyable.
As far as the characters changing or evolving over time, no one “really” does.  The girls of the Underground Student Council seem, in some ways, to have gained affinity for the boys within their own respect (Hana and Meiko mostly), yet do not want to change their course because of their president’s ambitions.  As such, the remorseful ultimately allow for their goals to remain unchanged.  The boys themselves do not really seem to change much from the very beginning since they are introduced true to their core characteristics (which never seems to change).
While there are not an abundant amount of character that are engaged, and very few side characters, Prison School has very good presence for those whom are protagonists.  Their outrageous antics and unique personas all come together to make a cast of characters that standout together and as individuals.  While some standout more than others, the balance of characters is suitable to the plot it portrays. 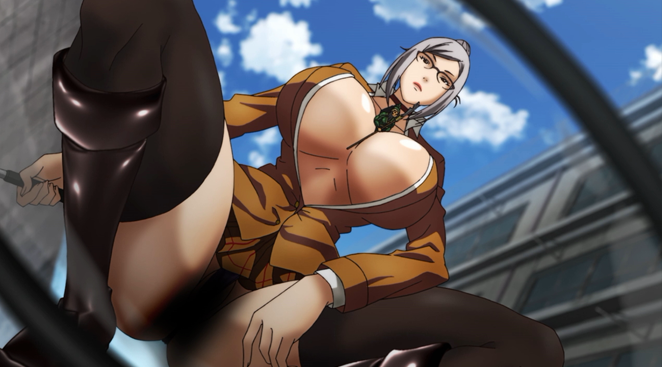 Prison School has many moments that are very ecchi, and many with Meiko are especially perverse.  Within the normal anime (the one that aired on TV and the one that can be viewed on Crunchyroll), a lot of her scenes are too raunchy for normal television and are censored through the use of black bars.  Many people who are trying to get into the plot and are easily susceptible to sexual themes in anime may possibly be put off by Meiko’s character.  At the same time, a lot of the other moments in Prison School are also very sexual, but a lot of those are necessary for the actual plot to advance whereas Meiko’s is simply there for fan service.
Meiko is designed as character whom is physically fit and well disciplined, but has “assets” that are quite voluptuous.  Something else that is unique about Meiko’s character within Prison School is that she is the only woman whom dresses scantily clad.  This is a direct contradiction to what I believe the Underground School Council stands for, so I have no idea how she is able to get away with this as Mari, the president, is very strict when concerning gender relations.  While we could easily say it is because Meiko is a woman and there is no concern to attire when Hachimitsu was an only girl school, the Underground Student Council has existed for generations with the same goal of eliminating sexually explicit activities within school grounds.  Basically, there must have been a lot of yuri-esque activity to have the council form in the first place, so it makes no sense that someone who dresses as Mieko does would be allowed to walk around, let alone be a ranking member within the Underground Student Council. 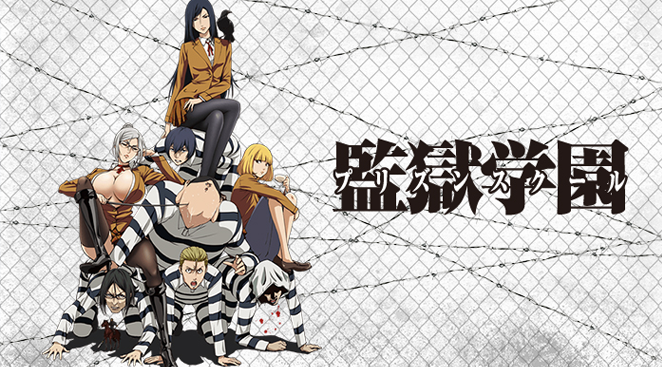 YES!  WATCH THIS ANIME!
STRENGTHS   – Good characters, Funny and logical plot, Many embarrassing and anxiety filled moments, No filler episodes.
WEAKNESSES   – Meiko is overly ecchi at times and can put off some watchers, Hana’s feelings towards the main character remain ambiguous.
To be perfectly honest, I did not find a whole lot wrong with Prison School.  I found it to be extremely enjoyable and remarkable.  Perverted comedy is one of my favorite genre and many anime attempting to hone in on that singular category have succumb to an alarming trend; overwhelming demand for fan service while not caring to add enough substance to the actual anime’s plot.  Prison School has both justified perversions and memorable characters that make the entire plot work as intended.
For those of you who are worried about whether-or-not this anime is good, I believe that you should give it a shot.  This anime was well talked about for good reason.  Even right now there is an ongoing live-action adaption for Prison School due to its popularity and interesting idea of a storyline.  Make sure you give it a watch, you will not miss out!
SHARE:
RATE: