Life is Strange is the telltale-style game by Square Enix which you become Maxine “Max” Caulfield, a girl who discovers she has the miraculous ability to rewind time.  With the ability to control the past, present, and affect the future, she attempts to change the world for the better through the use of her newfound ability.  People are saved that should have died, thing are found out which would have remained unknown, and whether-or-not she is actually helping remains a mystery.

People flocked to this game and absolutely loved it, and while it was a good game, it was missing a little extra “something” by the time I got to the end of Episode 5.  After a long debate, I found out that adding one extra choice to the fray would have made this game from good to great in my opinion.

Hit the jump for the full explanation. 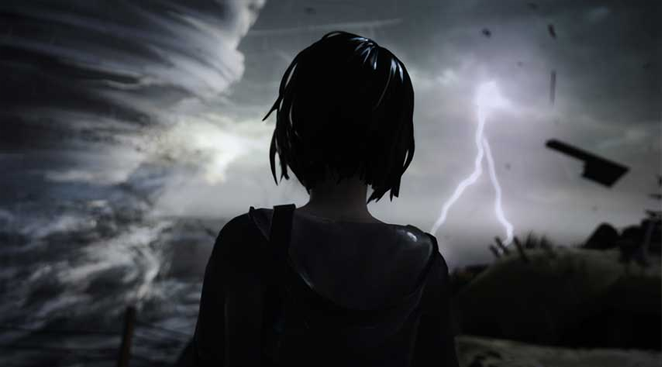 This game, much like those within the telltale game series, focuses upon your choices making a direct impact on how the game plays.  All games within this series (Life is Strange Episode 1 through Episode 5) are directly impacted by actions that you make.  Some choices you make only effect minor things which has little bearing on the overall plot, while some things have stronger influences due to how people feel about you due to your previous interactions with them (which also have the ability to change certain outcomes and effect the world).  This game is all about choices, and this game missed one critical one at the very end of Life is Strange Episode 5: Polarized, and that is for Max to kill herself.

Due to her powers of going back-in-time and changing events that should have occurred, she caused a freak accident to happen which will completely annihilate Arcadia Bay, killing mostly everyone within the town.  Knowing that she is the cause the massive tornado which spells doom for the small town, you were given two choices at the end of the game for Max to pick between.

2. Allow Arcadia Bay to be destroyed by the Tornado.

While both of these choices are feasible and make perfect sense, they are both defeating the purpose of Max’s initial uses of trying to reverse time; she wants to save everyone!  Either choice allows for people she cares deeply about to be hurt.  I understand this could very well be the purpose of Life is Strange, to lead the player into an uneasy feeling by having to pick what they feel is the lesser of two evils.  Many have seen the dilemma of “sacrifice one to save many, or sacrifice many in order to save one”.  It has people deliberating on the moral thing or the selfish thing within the judging eyes of the status quo; but this game did not have to be like that and could have provided a lasting experience and left you feeling satisfied with Max acting as a martyr.

By you letting Chloe die, you would have full knowledge that you are going to let Max’s best friend die in order to try and save everyone else.  Nathan would be found and arrested for what he did, and will probably snitch on Mr. Jefferson which brings him down without you having to interfere, effectively returning the timeline normal and erasing the soon-to-be massive tornado.  At the end you are soon attending Chloe’s funeral, and if you actually committed euthanasia in the previous timeline when your decision to save her father ended up with her as quadriplegic, then it is possible Max feels responsible for killing her best friend TWICE.  Not a good look.  This also leaves poor Joyce (Chloe’s Mother) with having to go through losing her daughter after losing her husband so many years ago.  Pretty cruel for a woman that nice.

The second decision to allow Arcadia Bay to be destroyed simply by allowing Chloe to live.  Chloe means quite a lot to Max and she means even more to her by the end of the game.  At the same time, you would be allowing people to die whom you originally wanted to save.  Whether-or-not Kate Marsh committed suicide or not does not matter because she will be killed, saving Victoria from Mr. Jefferson is also pointless because she will die, and what about people who are not even involved like Warren?  By allowing Chloe to live you will be effectively kill all of these other people, including Chloe’s mom Joyce.  While you may save your best friend, that is all you are really doing and nothing else matters.  I guess that is the point, but it does not leave you with a very good feeling.

Allowing a third option would essentially save everyone BUT Max, allowing a greater option of choice.  Such as having an option for Max to take the gun that Chloe had and commit suicide with it in order to stop the storm.  It would be perfectly feasible for the storm to just kind of “vanish” out of thin air while everything is happening considering we already got crazy occurrences like it snowing while the sun is still up or the double moons on the night of the Vortex Club party.  They could have made it so that when Max talked to Warren inside of the diner that he mentioned how the storm’s presence is directly connected to her because of her powers, and without one the other would fail to exists, kind of like two separate forces that are tied to the same lifeline.  This would allow Max to go back in time and fix everything, stop Chloe from dying and stop Mr. Jefferson’s Dark Room acts, while simultaneously allowing the town to survive.  It would make the player feel better than only having an option of either destroying the town or allowing Chloe to die.

What do you think?  Do you believe that this would have provided a better experience if you had been able to save everyone but the protagonist?