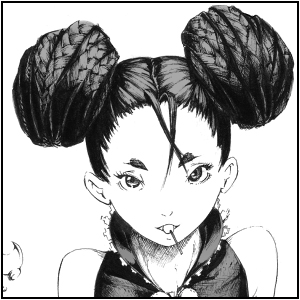 Top 5 Tuesdays is a series that focuses on my top five anything on a given subject that is directly related to anime, gaming, or manga.
Manga and Anime are the two main things that opened me up to Japanese culture, and what better attraction to read a manga or watch an anime than an awesome girl character?  Well, it is very easy to see how a female character that makes a mark can easily increase one’s interest.
With my history of watching anime and manga I have come across many female characters, but only a few make up my personal list of favorites.  Go ahead and it the jump to see my favorite female anime and manga characters!

Over the years I have watched many anime and mangas and I have noticed something pertaining to nearly all of them.  Well, besides some ultra badass guy character that has just the right amount of arrogance, charisma, and unbridled brutality (Alucard); I have paid attention to the development of the female characters since often they are given the more comedic roles or those that are sexually gratifying to the viewer.  However, every now and then they will be blessed with roles that break the status quo, are given above bimbo personalities and transfigure themselves into something truly brilliant, at least enough to make a lasting impression.
When it comes to video games I mostly have female characters as my character of choice (BlazBlue, Dead or Alive, TEKKEN, etc.), so it is a simple deduction that I would also favor the female characters in most anime I watch and manga I read.

All right!  Now that I have cleared up some things in the “Aw Yeah!  Loving the Ladies!” section, it is time for the main event!  Without further ado I will give you all what you came to this posting to see!  The female characters in anime & manga that are my top favorites! 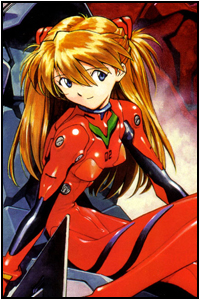 #5 – Asuka Langley Shikinami (Soryuu)
Asuka Langley Shikinami (Soryuu) is from the series “Neon Genesis Evangelion“.  She is known as the “Second Child” and pilot of Eva-02 in the battle against the “Angels”.  She fights in order to save the world from the Angel’s assaults to halt them from repeating the catastrophic events that occurred during the “2nd Impact”.
The picture featured here is the first image I ever saw of her on the back of an Animerica anime magazine.  I did not know who the girl was, but I knew she was pretty and it was not until years later when I finally sat down and watched Evangelion that I found out exactly who she was.  Her personality, head strong attitude, and damaged by her past all make up Asuka.  She made this list rather easily and is easily my favorite character from Neon Genesis rivaled by none. 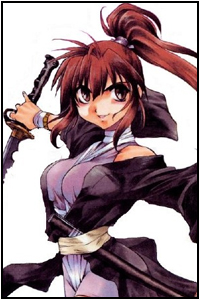 #4 – Ryoko Mitsurugi (Manga Version)
Ryoko Mitsurugi is from the series “Real Bout High School“.  She is the main antagonist of the story and attends Daimon High School.  She participates in “K-Fights” and street fights to find her own path, hone her samurai skills, and become a “Great Woman”.
Real Bout High School was the very first manga series I began to collect and the very first manga series I completed, so Ms. Mitsurugi will always have a place in my heart.  She is very fond of the samurai ways, making it a part of her everyday life by following their code; honoring justice and defending the weak.
Throughout the story I get to see many sides of her:  A Strong-willed woman with a cast-iron resolve, and a frightened little girl who does not now her place in the world and grew to love each side I seen.  Oh, and she has a very nice shape. 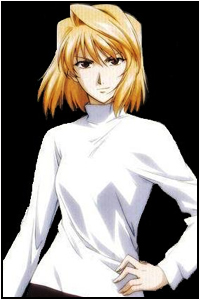 Arcueid Brunestud is the heroine of the series “Lunar Legend: Tsukihime“.  She is the weapon designed by the True Ancestors to destroy any “Fallen True Ancenstors” and aids Shiki Tohno in his battle against Roa.

I was first interested in Arcueid because she is a character in the game “Melty Blood” and become my secondary character after Aoko.  During the course of the manga she comes off much like an innocent girl with no actual knowledge of the devastating power she possesses, but even more than that she is more kind than nearly any girl I have ever saw in a manga.  Her kindness is seen after she is able to befriend Shiki Tohno even though he (unintentionally) killed her and cut her into many pieces.  Her soft demeanor, gruesome power, and being exceptionally cute all went into her making my list as #3 on this list. 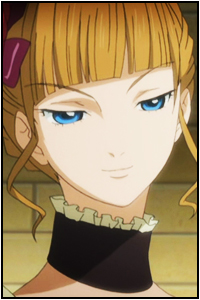 The Golden Witch, Beatrice (Beato) is from the series “Umineko no Naku Koro Ni” (Which I did a review on HERE).  She is the main antagonist of the first series in the anime, and while she seems very bad at first, I turn out to have mix feelings about her later on.

She is cold hearted and an “Endless Witch”, but she also has such a cute innocent side that seemed to have been robbed from her, which causes her to do these things.  She plays a game with Battler, but only so she can  repay him for the “Sin of forgetting”.  Overall, she is someone who is not afraid to kill over, and over, and over again; but she is so adorable doing it that I do not mind watching! 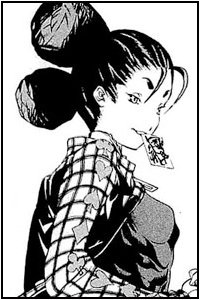 Om is from the series “Air Gear“.  She is a member of the Air Treck team “Sleeping Forest” and is the Water Regalia keeper.  She has an affinity for lollipops and advanced technology.

Om only made a significant appearance during the parts war battle where she temporarily became a member of Animal House to battle Kogarasumaru in Ikki’s absence.

What attracted me to Ohm was her attire reminded me of Chun-Li’s in Street Fighter Alpha and she had the thighs to match.  Not to mention this, she was small and scrappy.  Her attitude was also playful, mean, and extremely cute all in the same chapters.  She comes to my mind the most when I think about manga females; not to mention “dem eye brows”.

Even though they are only pawns in the chess game of their respective stories; these ladies of anime/manga have had a significant impact on my overall love for their respective series and genre.  Characters that you like are a big incentive towards liking anything, and nothing does that more than compelling females that are so masterfully done.