My good friend Bianca suggested that I could watch Nisekoi, that it was one of the ones she was currently enjoying.  She did not know if I would like it or not since a lot of it gives off the impressions of a romantic comedy, but I am usually down for whatever she suggests because I normally end up enjoying it (she has pretty good taste!).  Yesterday I finally sat down and watched the first episode of it, so now I think it is only proper to give my thoughts on it for you all to read.
1st Episode Impressions is an article series which focuses around critiquing the debut of a new anime or a new season’s very first episode to see whether-or-not it makes a lasting impression on me from the very beginning.  It also acts as an comparative point for my final review of that anime or season.
1st Episode Impression 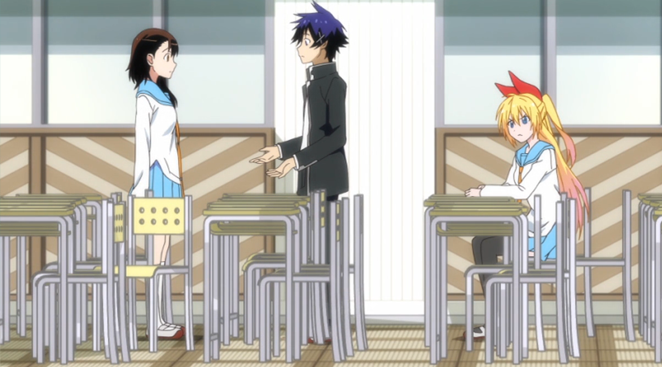 From the opening scene we can already determine what the sole plot of the series is going to be: Raku Ichijou is going to desperately pursue the girl who made him a promise by giving him his locket lock ten years ago.  Many women will show up and attempt to persuade him towards their affections, resulting in something similar to a harem style anime.  I am sure he will find the girl whom he made the promise to all those years ago, but he will be effectively torn between the women he fell in love with and must determine whether-or-not he wants to honor an age-old promise or pursue new found love in one of the girls he has met.  This setup already sounds like something from Love Hina, but maybe I am reading too far ahead and it will not follow that exact story line.  The way that they introduced the plot however, was not that bad.  The beginning played a piece like a black-and-white movie showing what was embedded in Raku’s memory as a child.  Basically, it provides us the manner in which he received his treasured locket all those years ago.

As we make our way into the story, we are introduced immediately to three characters.  The main character, Raku Ichijou, supporting character Onodera, and deuteragonist Chitoge Kirisaki.  They give enough background to determine the roots and the personalities for everyone of them (well, except Onodera really).  Raku seems to be a character that is constantly within a hostile environment, so he longs for stability and peace, but he is also love stricken by the promise he made so many years ago.  Onodera seems like she has a big interest in Raku and is pure at heart, but harbors a secret that may-or-may not alter the course of events at some point.  Chitoge seems to be a girl that excels at most everything (on the outside), yet she does not have nearly as perfect Japanese comprehension as she stresses and is rooted in mystery (until the end of the episode).

Raku and Chitoge make for an interesting plot twist at the end, especially considering their chemistry throughout their interactions in this episode and the background that each of them possesses.  This plot twist effectively sets up the first dynamic conflict that will be present throughout the entirety of the series, and also acts as a building point to what looks like a slipstream towards what the final episodes of the entire series will look like.  However, we cannot be too sure on that.

I do not really have many bad things to say since they give each character a unique personality, clearly lay out what the plot is suppose to be, and setup a twist at the end which allows for the plot to advance in unusual ways.  Such an awkward situation that cannot be avoided presents a type of randomized factor that I cannot actively predict, even if I know for sure what the end result might be based on previous anime (such as Love Hina, as I mentioned earlier).  All-in-all, it was a pretty decent way to start an anime and I will see how it plays out from this point forward.