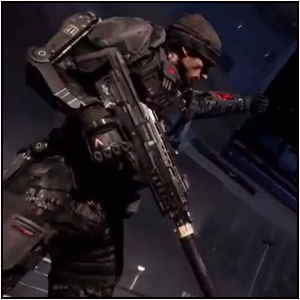 Call of Duty as a series has not been fun to me since “Call of Duty: Black Ops”.  I never touched Modern Warfare 3, Black Ops II, or Ghosts because it all looked the same as previous iterations.  I also did not really care for “Killstreaks”, where one player got rewarded with better firepower for already doing better than everyone else, it made no sense.  However, that may change in the future.
A new trailer has been recently released called “Call of Duty: Advanced Warfare”, and it shows a futuristic world that seems to believe that the idea that America was founded on is flawed, not to mention that tolerances of anyone other than ourselves seeems to be too lenient a policy.  Hit the jump for the trailer and my impression on what I think about this trailer.
My Thoughts on the Trailer
As I have stated above, I believe that this trailer is talking about America having a president in the future who believes that we are being too tolerant with the world as it is today, that the policies we have been trying to uphold are anything but realistic.  Countries whom we have overthrown the dictator do not have the “Basic building blocks” to even form a democracy, yet previous presidents have pushed for this as the core of every nation…but this new president thinks otherwise.  Those who have power are in control from what he is saying, and are free to do as they please as long as they have the resources and strength to see through to their convictions.
My idea is that this is not a bad way to go, a storyline where America themselves are the tyrants and are trying to format governments to follow their rule instead of trying to make them self-sustaining.  At the very same time, it also adds a new twists where we could go rogue in an attempt to revolt against our own president and constitution since he is displaying the same acts of dictatorship we have put a stop to in other countries.  I also believe they would go to this route as a way to give a look into alternate thoughts with our modern era of invading places like Iraq and Afghanistan.
As far as gameplay mechanics, I see something that look akin to “Mechanical Exo Skeleton”, which could give their users advanced abilities.  Some of the “advanced abilities” I believe to see are things like Super Strength, High Jumps, and the ability to Climb Walls.  Whether-or-not these are Single Player Campagin Only or are also available in some form in the Multiplayer is yet to be seen, I guess we will have to wait until the Multiplayer Reveal for that portion (Also to see if Killstreaks comeback in some form or another).
One thing I have always liked about Call of Duty is their ability to deliver a thorough Single Player Campaign, but I have avoided it in the last few installments because I did not like the Multiplayer, which is where I will be spending the vast majority of the time playing the game.  Sure, a lot of people did not like Titanfall because it did not have an engaging Single Player Campaign, we cannot doubt that more than double our time is spent in Multiplayer modes; so I will wait to see how that is shaping up and if Call of Duty has truly “Advanced” beyond its old tell-tale formula.

Destiny: My Impressions of Year One

REM is not best girl! video is out