Viz’s continual love of the Sailor Moon series has not yet come to an end!  The legendary anime series is receiving a release which contains episodes 22-46.  This release will be available in both a Blu-ray/DVD combo pack, as well as standard DVD set.  Either option is suppose to include premium packaging and bonus materials.
After the jump I have included the full press release for those of you who want to know the full details behind this re-release of the legendary series!
Press Release 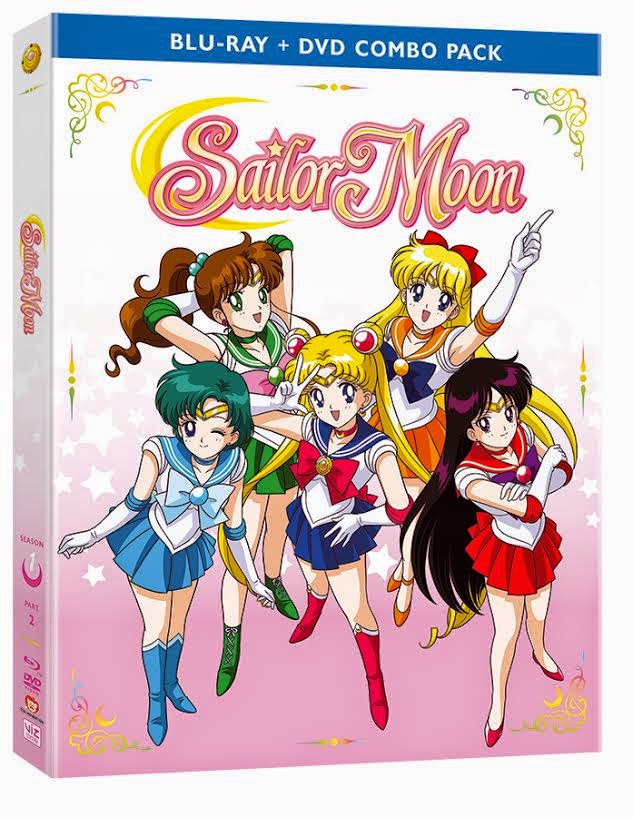 VIZ Media, LLC (VIZ Media), the largest distributor and licensor of manga and anime in North America, has announced the forthcoming release of SAILOR MOON Season 1, Set 2. The latest installment of the iconic fantasy action anime series will be released as a Blu-ray/DVD Combo Pack and also as a Standard DVD Set on February 10, 2015. Pre-orders are available now from all major online retailers.
The SAILOR MOON Blu-ray/DVD Combo Pack and Standard DVD Set are rated “TV-PG” and contain Episodes 22-46 of the legendary series, along with a wealth of bonus material and special premium packaging. Uncut English dubbed as well as Japanese subtitled dialogue options are available on both formats. The SAILOR MOON Season 1, Set 2 Blu-ray/DVD Combo Pack will carry an MSRP of $69.99 U.S. / $81.99 CAN; the Standard Edition DVD will carry an MSRP of $44.82 U.S. / $51.99 CAN.
The Blu-ray/DVD Combo Pack contains a deluxe, 6-disc collection (3 DVDs & 3 Blu-rays), with a beautiful reflective holofoil slipcover with specialty printing. The Combo Pack also offers bonus content including SAILOR MOON Day convention event highlights, Moonlight Memories Part 1, the complete 2014 Anime Expo SAILOR MOON Panel and Cast Announcement, official cosplay team interviews, clean opening and ending segments, digital art galleries, and official series trailers. Blu-ray episodes are presented in full 1080p High Definition video.
The SAILOR MOON Season 1, Set 2 DVD Set features 3 discs with beautifully illustrated variant O-card packaging and embossed holofoil printing. Episodes are presented in 480p standard video format. Bonus features include SAILOR MOON Day convention event highlights, the official series trailers, and clean opening and ending segments. Uncut English dubbed as well as Japanese subtitled dialogue options are available.
In their latest adventures, Sailor Moon, Sailor Mercury, and Sailor Mars continue their quest for the Legendary Silver Crystal as two new powerful allies join the fight. Sailor Jupiter is the tall and tough Guardian of Thunder, and Sailor Venus is the Guardian of Love and the most experienced member. Sailor Moon herself gets an impressive new power and learns more about the mysterious Tuxedo Mask. Could their distant past be intertwined, and does that have anything to do with the Moon Princess they seek? The final ordeal with Queen Beryl looms on the horizon, and it will take everything the Sailor Guardians have to be victorious!
“Fans will not want to miss the Sailor Guardians’ latest interstellar adventures in these forthcoming SAILOR MOON home media releases,” says Charlene Ingram, Senior Marketing Manager of Animation. “The episodes shine like never before in crisp High Definition and the Combo Pack set fits perfectly into Set 1’s shimmery, collectable art box. Catch the exciting next installment to this celebrated series coming soon in 2015!”
SAILOR MOON depicts the adventures of Usagi Tsukino, a cheerful 14-year-old schoolgirl who often finds herself in unwanted trouble. One day, she saves a talking cat named Luna from some mean kids, and her life is changed forever. Luna gives Usagi a magic brooch that transforms her into Sailor Moon, guardian of love and justice! Now Usagi must work with Luna to find the other Sailor Guardians and the Moon Princess, whose Legendary Silver Crystal is Earth’s only hope against the dark forces of the evil Queen Beryl!
The smash hit SAILOR MOON anime series is inspired by the bestselling manga (graphic novel) series created by Naoko Takeuchi (published in North America by Kodansha). In the series, Usagi Tsukino is a clumsy but kindhearted teenage girl who transforms into the powerful guardian of love and justice, Sailor Moon. Meeting allies along the way who share similar fates, Usagi and her team of planetary Sailor Guardians fight to protect the universe from forces of evil and total annihilation!
For more information on SAILOR MOON, or other award-winning anime titles from VIZ Media, please visit www.VIZ.com.
SHARE:
RATE: