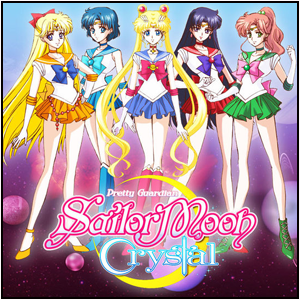 Sailor Moon is pretty much the queen of bishoujo anime and the unabashed empress of the “Magical Girl” genre.  I keenly remember my sister waking me up at 6:00 am because she wanted someone to watch Sailor Moon with her, and little by little the show grew on me.  Dragon Ball Z got a new movie with “Battle of the Gods” and my inner kid lite up again, and once Sailor Moon Crystal was announced I was at my limit.  But let me get to why you are here.
Recently the opening for this series has been revealed as well as the transformation which shows school girl Usagi turning into the “Pretty Guardian” known as Sailor Moon!  I will have both videos after the jump along with a detailed description on what I think about each of them.
Transformation
Something that completely annoyed me about the new transformation of Usagi turning into Sailor Moon was none other than the use of a 3D model instead of having the transformations drawn.  A good 3D Model should mock that of the original drawings and be nearly indistinguishable.  While I know that a lot of anime use 3D in their animation (Which I hate), the only one I think that ever had a logical excuse to do so was Initial D, and even then I did not fully watch the anime because I simply hated it.  I am not the only one that believes this to be the case as I am seeing a lot of people on the YouTube video voicing their hatred for the new transformation CG.
As she begins to transform everything is all right up until the point where her bow forms her suit (Where she is pretty much all blue, kind of like a galaxy because she is fully naked), but the instant that her suit forms we see the horrible, horrible CG graphics that seems like a watered down version of the style used in the Black Rock Shooter TV Series.  What is worse, it does not even feel like good 3D, it feels poorly rendered and even the angles at which her boots forms shows the lackluster care that went into making this scene.  The end of her transformations hows a still image, and this is probably the only part actually drawn throughout this entire thing, and that is pretty terrible.
Comparing the Two
Comparing the two, I find that the old transformation is vastly superior to the new one.  There is only one point that outshines the old one in my opinion, and that is at the very beginning when she appears like a cosmos to cover up the fact that she is naked right before her suit forms.  Otherwise, you simply have better a better transformation with the original version; the way Sailor Moon crosses her hands over her face before her gloves form, the fact that her feet stays in one place as the boots form without moving them away all spastic like, even just how the individual strands of hair moves as her tiara forms in comparison to the lifeless, generic hair of the 3D Model.
All-in-all, this is suppose to be one of the most important parts of the entire series and they did not nail it.  I do not know what could have possessed them to go this route instead of traditional 2D animation, but they ruined one of the best aspects of the series.  From Sailor Moon, to Sailor Moon R, to Sailor Moon Star S, I have loved every iteration of the Sailor Scouts transformation, but I abhor this one with all of my being.  Oh, and the music is worse in the new version, go figure.
New Opening
The entrance was actually pretty good, everything felt updated and how a 2014 Sailor Moon should look.  Though, I saw a lot of references to the first season (Pretty sure I saw the Negaverse represented), and the fact that there was not a lot of action, it it relatively well.  All right, I am not going to lie that I still prefer the very first season (I mean COME ON!  Moonlight Densetsu is probably one of the best opening songs ever created…but this one is growing on me), but they did not do a bad job on this one and at least they did not CG it like Sailor Moon’s transformation.
While I still believe the old opening is superior in both the quality of the music and obscurity of the way it is presented, they did do some pretty good effects when introducing the Sailor Scouts at the beginning, end, and the pose with the entire team formed together (Being off center to the right instead of in the middle like in the original) was a very good call as Sailor Moon’s pose is very dynamic.  I guess I give this one a pass.
SHARE:
RATE: