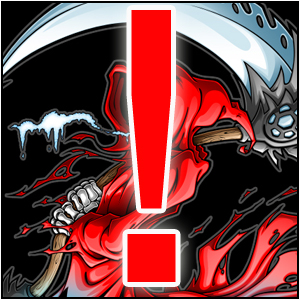 Starting this blog, I just wanted a creative outlet for my writing as well as to show my love for gaming, anime, and manga.  Over that time I have undergone a series of changes for myself as well as the site.  I have grown from doing it merely because I love it, to do it in order to try and gain things like free review material, to even doing things based on what would make me more credible to attractive those who would want to advertise…but I am beyond all of that now.
This announcement is going to be about how I plan to merely be the best that I can be without worrying about everything else that goes along with it.  To deliver quality news, reviews, interviews, and any other material or content that fit gaming, anime, and manga.

Multiple things made me realize why I got into writing this blog in the first place, reminders from friends fueled me and let me know that it is okay for me to be me…and with that, my creativity feels like it is now boundless, endless, and I want to get back to my roots when it comes to updating this site and filling it with content and media.  I know that will not be easy, but I am willing to take it to that level where I will once again get excited about posting things up on my blog.  There are several things that I am going to address in this post with a paragraph dedicated to each of them.

Why Am I Writing?  What is my Value?

What is my value as a writer?  Why am I writing here on this blog?  Honestly, I had no idea what had become of me.  I had no idea why writing was not fun and why it felt like a chore each and every time I went to write something…but then I realized it was no longer fun for me because had turned writing from something that I loved to creativity my knowledge and creativity into something that was only for shallow reasons.  “Why is this person getting more review material than me when I write better than he does?  Why is my sight not getting notice when I provide more in-depth reviews and analysis than even major sites?  Why is it that a company will not take a chance with me on a retail game or an anime product company willing to let me deliver a write-up on their products?”.
It was that frame-of-mind that began to take over everything, forcing me to want to do more mainstream things and soon it became.. a chore.  Articles became less fun and more like work, and once I published a piece I began to compulsively check for any new comments and good pageviews.  I began to do more interviews on the Fighting Game Community because I wanted to have my name known around the place, especially since I managed to land on the front page of both Shoryuken and Eventhubs which netted over 5,000 pageviews per article.  I was getting reviews for Xbox Live Arcade Games so I was taking anyone I could get my hands on and delivering content at every turn, but was distressed because I had failed to land any retail games, especially after the DmC fiasco with CAPCOM and them not doing what they said that they would do.  I began to become greedy, and someone who is greedy is never satisfied and soon becomes complacent.  But beyond that was the feeling of not being “Good Enough”.
I have many people who commented that they appreciated my review, someone on my Sherryjenix interview article even said, “Love the site, please do a skullgirls review when it launches!”.  I have earned friendship with many good writers, including the head of Otaku Dante’s Gaming Inferno, Real Otaku Gamer, and even more people whom help to support me…but I just did not feel adequate.  Writing without feeling like anyone is paying attention to my words only lead me to believe I was doing it all for nothing, losing sight of the fact my love for my subject drove me to do what I did and not the praise or the rewards that came for it.  I had become blinded.  I also love drawing but was unable to do it for many years because no one followed me on deviantART and someone whom I loved very much told me that I, “Draw like a 12-year-old girl”.  However, without me believing in myself and knowing why I am doing the things I do, I became worthless to myself…but even that same person said that I was a “Writing aficionado”, and even that same person bragged about my skill level in video games.  With all this positivity inspite of the negativity, why did I feel like I did not have success unless I was at the very zenith of things?  That if I was not the best than I was a failure?  That second place was merely the best loser and feeling even worse than someone who had placed last?  It just came from an inferiority complex that was embedded with me at an early age, from rejections of relationships and other prospects that 2nd place was unacceptable and something to be ashamed of.  But now I see past all of that and for how things SHOULD be, and where I want them to go.
Now, all these years later I see that I am worth value.  I would not have magnificent friends who love me and support me in all of my endeavors and push me up constantly when I need it more than most.  It may be a little late, but better late than never.
Plans For the Future
Currently, my plan for the future includes me doing the very best I can in every area of my life; whether that includes exercise, writing, gaming, or drawing, I will do my best to make the most of it.  I have been entirely too lazy with my life up until this pint because I believed that all of my effort would have no significant payoff, therefore, there was no point in me doing anything because it would not really matter one way or the other.  Now, I see that something can happen but I have to believe that it can and doors will open up for me.
With that, my vow is simply to be the very best that I can with what I have to work with.  I will never stop moving forward and I will not give up.  I have yet to reach my full potential and not doing my best would be letting down everyone who believed in me enough to give a damn about my ambitions and invested their emotions into me as a person.
I would like to thank anyone that took their time in reading this, and if you are one of those people who have supported me, thank you.
SHARE:
RATE:

One Reply to “Vow to Be the Best, Raw and Uncut”