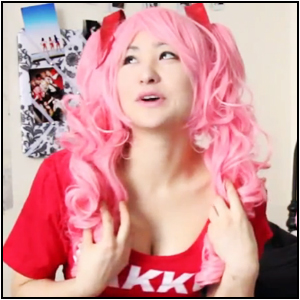 Jenni or “mostflogged” was born in New York, New York.  She stands 5 feet 4 ¾ inches tall and weighs anywhere between 108 – 116 pounds, “depending on how much she works out”.

As of this analysis she has only done a total of 3 video seijin manga and doujinshi reviews: “Good Wife“, “Mother & Son Gone Off Track“, and “Ririko in Heat“.  Now, I will begin my analysis.

_Presentation & Showmanship
To begin, I want to talk about her presentation and showmanship.  Something that catches me right off the back is the fact that she walks into the opening scene in her first two video reviews without editing them out, specifically to show off her shimapan (Striped Panties).  It is apparent that she did have the ability to edit her videos as you can clearly see from her placing the upper-half of the title page of her first seijin manga review in the video.  Now do not get me wrong, I love panty shots as much as the next guy, hell, Agent Aika is my favorite ecchi anime, but opening up your videos with fan service just sends the wrong impression from the very beginning if you are trying to be a serious reviewer.  How you present yourself and especially on the first impression will let your audience know if you are the kind of person they will take seriously and want to continuously see.  What helps to offset this is the fact that she is very kawaii (Cute) and her outfit seems to fit her in the fact that she does cosplay of Momoka (FAKKU’s Mascot) very well without being overly sexual except for what the character itself stands for (Which is to be applauded).  However, I do believe doing it in regular clothing would have provided a much more realistic.

As far as how she presents herself, she has some good and bad things that goes with the mannerisms that she has while reviewing.  She makes great use of her hands when explaining things in order to get her point across (Such as the awkward “U-Turn” position of the main female character in her third review from 3:36 – 3:41) and they do not seem at all too distracting, but more along the lines of demonstrative and informative.  Also, she is very good at displaying emotion on her face with her facial expressions, especially the way she positions her eyebrows relative to how she feels and staring off into a different direction when she is at a loss for words or finds something questionable.  Now, a few of the bad things she does when she reviews has to do with her probably being “too comfortable” around the camera.  Often times you will find her flipping her wig as if it was actually real hair, and she also breaks eye contact entirely too much with the camera (Even though it is great sometimes, she should focus more on looking at the lens).  Not to mention she was scratching herself without missing a single beat in her second review from 1:05 – 1:07.

_Explaining & Elaboration
Explaining yourself is vital to reviews, if you cannot tell me exactly what you wish to confer then it does me no good and I gain nothing at all out of it.  I found myself more-or-less getting the gist about what she says because of her brief synopsis about how she feels in totality about the piece, but I find myself sometimes at a loss when she is actually in the process of explaining the seijin manga/doujinshi.  This is mainly because she does not have an established track or order when she talks about things and seems to be nearly entirely spontaneous with no planning ahead of time, which works both for and against her.  It works with her because she has high energy in front of the camera and her voice dramatically changes in pitch and tone depending on what she is talking about, this keeps you entertained and can very easily allow for a viewer to disregard something if they did not quite get where she was going with it.

Next off if the type of words or phrases she happens to use.  You will find her saying things like, “Put it in your butt” during her second review instead of saying, “I am going to have anal sex with you”, her wording can be crude sometimes which is not necessarily a bad thing, as it can be quite humorous at times (Such as when she was describing her ability to see the girl’s pancreas and other things during the X-Ray moment in her Third Review).  However, during a few scenes she happens to use recently popular slang (Such as “J.K.” or “Just Kidding” and “YOLO” or “You Only Live Once” in her very First Review).  I can understand that there is a certain “Nerdiness” and popular knowledge you associate with those in the otaku community but things like these should be better explained.

Another thing is that she uses a lot of “filler” words.  She has a habit of gathering her thoughts and using the words “Uh”, “And”, and “Like”, entirely too much.  An example of the latter is when she was describing the Japanese portrayal of a Black person in her very first review, “They’re just kinda like, ludicrously hulking with like, dongs up to like, their nipples, and just like, too much” (0:56 – 1:01).  While I said before, spontaneous recording can offer its benefits but you want to avoid using fillers as much as possible as it can become annoying with time.

_Knowledge
For someone who claims to read loads of manga, doujinshi, and seijin manga, I have found a couple of errors that maybe suggest she is relatively new to the world of Japanese adult comics (At least, paying attention to the finer details of them).  I will tell you a couple of my reasons.

A big reason is when she did not know what the “Chikan” tag meant in her Second Review, “Chikan, which is like, a younger boy and an older woman” at 0:19.  Chikan means “Public molestation” and it is often the basis of many seijin manga and doujinshi that focus on people who molest and grope women in the busy train system of Japan.  However, even with the computer in front of her for reference she did not bother to check the tag and verify the meaning for when she first started talking, and I believe the proper tag for a younger boy and older woman would have been “Shota”, but this tag does not even exist on FAKKU.

Moreover she claims that her very first “Vanilla” (Consensual sex) doujinshi was “Ririko in Heat” and was suggested through messages by those who watched her first couple of reviews.  There have been a massive number of Vanilla doujin posted on FAKKU, including my favorite ( “CADENZA -still in the night-” from the series Darker Than Black illustrated by Ajisaidenden).  She says in her Third Review video, “I’ve pretty much read every single EVA doujinshi…ever…that’s on FAKKU”.  This would not be her first Vanilla if she reads the Evangelion doujin since plenty have been posted (I believe this is what she meant by EVA, but she did not elaborate or say the whole name).

For me, if someone is going to be reviewing I want them to have sufficient knowledge over what they are covering and at least do research to get the most basic of things down.  I always make sure to do my homework when reviewing a manga or a video game, even if it is nothing but an editorial piece such as this one.  I can understanding making a few mistakes here and there, but giving conflicting information and access to tag information that is clearly given on the site itself proves no excuse. 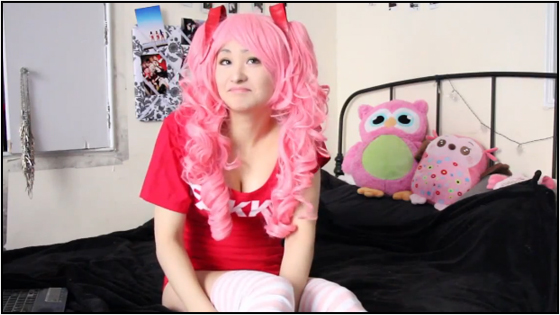 Jenni (mostflogged) makes a firm effort in order to state her reviews on seijin manga and doujinshi and does a very good amateur job of it despite having some drawbacks.  The thing that really pulls you in is the fact that she is really high energy and seems very into what she is talking about, that alone is enough for you to hear her out even though she uses a lot of fillers and sometimes appear to do the reviews on the fly.  She already has a very strong following (Only 3 reviews and already 3,000+ YouTube subscribers), if she continuous to improve and drop weekly reviews, it is my opinion that she could break the 10,000 mark very easily as long as she shows herself to be a reliable content provider and polish her delivery a bit more.

Somethings I would suggest is for her to liven up the background a bit.  Have something anime or manga related in the background and have things a bit more organized.  Also, I would like for her to begin to review better content than 20 page doujinshi or mangas.  Something that has multiple chapters or multiple stories in a single seijin manga or doujinshi would prove for longer videos and to better describe herself, also it would provide content worth watching for the rest of us. 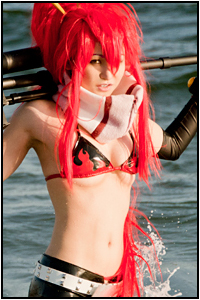 If you would like to follow Jenni (mostflogged) and get up-to-date information on her cosplay, video releases, or just other miscellaneous things; you can follow, subscribe, and find her on any of the following mediums.