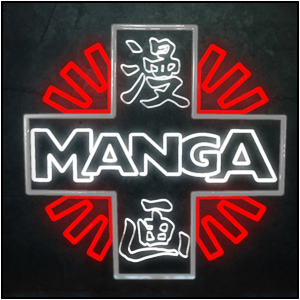 Manga Entertainment was founded by Andy Frain, which current headquarters rest in Los Angeles, California in the United States.  This company is more known for anime than manga, distributing it in various countries.

An application just recently launched on Xbox Live which allows for the watching of anime in full length movies, clips, and episodes with no extra cost as long as you have an Xbox LIVE gold membership, which is a fantastic deal.

I am going to upon up this application and see if it is everything we expect for it to be, or if the fact its free on Xbox LIVE means it is lackluster.  Read inside for details!

Opening up my disc tray I insert Soul Calibur V and figure that it is going to be another night of gaming.  I was going to make a couple of costumes, maybe learn Mitsurugi a little better since I main Alpha Patroklos who happens to be the most complicated character in the game, and then I was going to snack and maybe finish my article on Soft Circle French-Bread’s new fighting game, “Under Night In-Birth” (Do not worry, it is coming soon)..but then I saw something.

There was a picture of the guy from the “Last Air Bender” movie with his eyes and the reverse arrow on his head glowing and the words “Manga Mania” at the bottom.  Normally I would never even think to click on something from The Last Air Bender (Though, I have been hearing that the anime series “The Legend of Korra” that happens after “Avatar: The Last  Air Bender” is pretty good though), but I do.  It says “Get the new Manga App” and I am thinking “MANGA APP? WHAA?!”, I was thinking it was actually a Manga Reader but it was actually Manga Entertainment… score.  After downloading a 70.36MB file, I am now shown the application.

-[ THE APPLICATION ]-
First coming into the Manga Entertainment Application, I am made aware that they have a notice saying “Check back every Tuesday for new content”, letting me know this is not the final selection and they plan to regularly update their catalog of anime.  I am thinking that since they said this, they will only make some content available for a limited time or they could just swap out anime all together week-to-week, so you have to check back often so you do not miss anything you may want to watch (But that remains to be seen as of this point).  Eventually after a few seconds the application fully loads up and I am taking to the main menu of the App.
At the top I am seeing Search, Manga, Featured, Channels, Titles, and Settings; depending on the one you choose you will have different secondary categories or actions available to you.  Such as when you choose “Manga”, you are greeted with the “All Channels, All Titles, History, and Bookmarks”.  If you choose the “Featured” category, you will see select anime that is very popular at the moment.  Channels seem to have the anime categorized by certain criteria, such as Monster, Mecha, Vintage, etc.  So far from what I can see the organization of the App makes it easy enough to navigate and get exactly where you want to go with little to no effort.
So, I begin to look around and see that there is actually a lot more content than I originally thought; while they are only 24 shows currently available that have full episodes, there are many other clips and mini-shows that are available for you to watch.  Manga Minutes is an informative show that covers various things dealing with gaming and anime, such as the History of Street Fighter, Kamen Rider Fighting Game, and various anime series.  A few episodes of Manga Vibe, a show which focuses on interviews, fashion, and various other things of anime in the real world.  They also have things such as “Manga Gamers”, which features a clips from various anime, such as when Ryu was saving a kid from a group of robbers in Street Fighter Alpha: The Animation. Below I’ll give you the 24 anime titles that are currently available.
Anime Titles Currently Available
Most of these titles are older and a bit dated, but some of them I wanted to see that I have not before, such as Now and Then, Here and There along with Virus Buster Serge.  I feel this is a very weak starting roster and they could have added better titles that were under their licensing, such as Devil May Cry, InuYasha, and Hellsing Ultimate OVA.  But I figure they are probably going to be saving their hardest hitting titles for later, but a few thrown in right now would not have hurt whatsoever.
-[ THE VERDICT ]-
The App is good for a free application, but I would have been very disappointed if I had to shell out cash for this and they gave me what all is available right now.  I do not feel that Manga Entertainment really has a wide variety of blockbuster anime at its disposal, but I know it has better titles to offer than some of the things available right now.  I think if this App needs to have better shows and more content if it is going to be around for very long before it is forgotten; otherwise people will open it up on Tuesdays to check for new things and be disappointed and eventually stop using the App.
Macross II, M.D. Geist, and others prove good, as they are tried and true anime, but a lot of newer people who are just now getting into it will want more than the shows can offer as far as the animation and new age scenarios are concerned.  While I have much hope for this App, they need to follow up properly and deliver better and bigger content starting with their line-up of shows if this is not to be a disappointment.
I’m RoK the Reaper and thank you for reading my review on the Manga Entertainment App for Xbox LIVE, sayanara!
SHARE:
RATE: