Waifu Crush Wednesday is modeled after the popular “#WCW” or “Women Crush Wednesday”.  This bi-weekly editorial focuses upon female characters in gaming, anime, and manga that I happen to like in one form or another.  I will do my best to explain my affinity for the character featured here.
Tomoko Kuroki is the timid, socially awkward heroine of the slice-of-life anime, “Watamote”.  This high school girl became an instant favorite of mine due to her similarities with me, as I shared quite a few of her thought traits.  That and I just think she is just plain adorable!  Hell, I liked her to the point that one of my best friends, Bianca, bought me the Nendoroid of her (not to mention I also named my Xbox One after her!)! 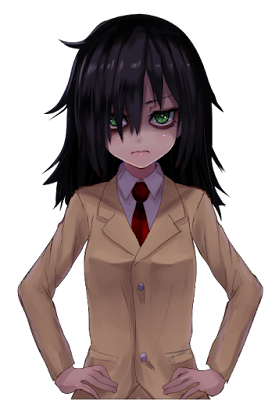 From the very start of Watamote, I really loved the opening as it was something that you did not quite see a lot of in anime.  Not since Death Note have I seen an anime which featured heavy metal in its opening song (though I am sure there are others, there was none others that I had seen up to that point).  I was a bit taken aback from the fact that the anime was nothing similar to the opening… but then again, it was everything about it at the very same time.
Tomoko Kuroki is a girl I loved because she was a prisoner of her own mind.  She was not popular because she placed too much thought and emphasis on what other people thought about her, therefore she tried to do her best to blend it.  This type of thinking caused Tomoko horrible social anxiety because she felt she was not good enough as is, fearing that she would spend the rest of her high school days alone and friendless.  This is something I could totally relate to.  I mean, I really did not understand why now that I look about it, but when you are an outcast it can be crippling trying to figure out how to blend in.
Tomoko tried everything that could do in order to fit in.  She even did something similar to what I would do and attempt to imitate anime stereotypical archetypes in order to blend in, such as “the girl who eats fast” and “the girl who never speaks and remains silent”.  At times, because we felt that if we embody a popular role, we will become that archetype and gain friends in the process.  This was a flawed way of thinking because you really cannot change who you are, and if you do so momentarily, you will always end up falling back to your “true self” eventually.
Tomoko and I also have a lot of similarities in common outside of just her social anxiety.  She is shown to be a massive pervert, often looking up inappropriate images or browsing the web in search of lewd material…guilty.  Also, her best friend happens to be attending a different high school even though they went to school together in middle school, this is something I shared with my best friend, Jerome.  She also tried to look cool by saying that she has or have had boyfriends, something I have did in the past when I really was too embarrassed to admit that I was not romantically involved with anyone.  Not to mention that Tomoko has permanent black bags under her eyes from staying up late so often, something that I also share with her (unfortunately, haha).
As you can see, from the amount of things we share in common, it is not hard to fall in love with Tomoko.  I have even once said that she is the, “female anime equivalent of myself”.  She is cute in her awkwardness, her perverted nature is appealing, and she is also the spitting image of myself.  Now… if we can just get a Watamote season 2, all will be as it should be.
SHARE:
RATE:

【Final Fantasy VII Remake Intergrade】PS5 Announcement
Proud to be a Gamer! Well…Maybe not as much Anymore.