Everyone who is a fan of anime and manga knows that Naruto is a massively popular series and it is now bringing its 6th movie in the Naruto: Shippuden series for audiences in the U.S. and Canada.  Select U.S. locations (Starting August 29th) and over 35 Canadian locations (On September 7th and 11th) will feature access to this movie during this special screening.
You can hit the jump below to view the press release and find out what the movie is about, where to find where the special screenings are available, and ticket purchasing information.
Press Release 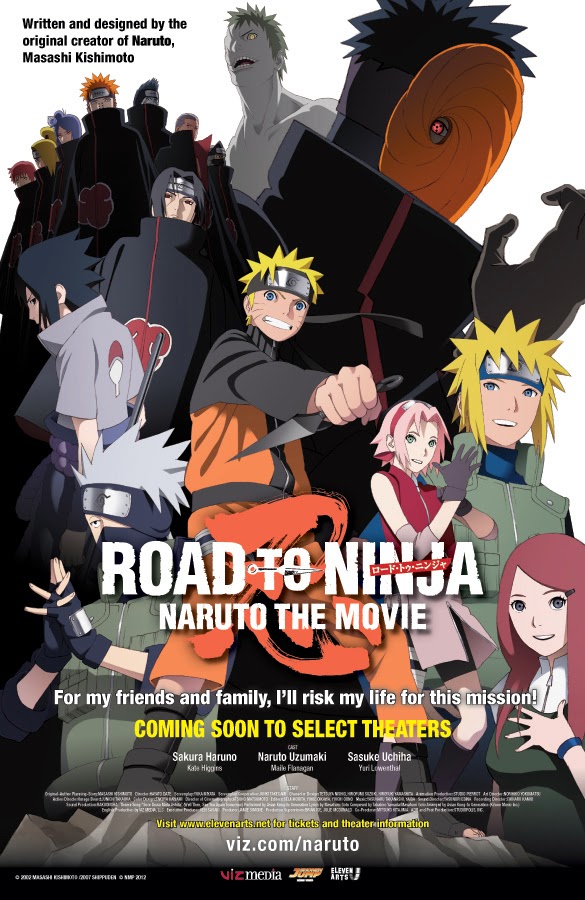 VIZ Media, LLC (VIZ Media), the largest distributor and licensor of manga and anime in North America, in partnership with Los Angeles-based film distribution company ELEVEN ARTS, will hold special Canadian theatrical screenings of ROAD TO NINJA – NARUTO THE MOVIE (dubbed) on Sunday September 7th and Thursday September 11th. These are in addition to the U.S. theatrical screenings starting August 29, 2014.
The sixth feature film in the massively popular NARURTO SHIPPUDEN series will debut in over 35 cities across Canada, including Toronto, Vancouver, Montreal, Ottawa, Calgary, Edmonton, and more. Tickets are now available, and additional information and a complete list of U.S. and Canada theatre locations are available at: http://www.elevenarts.net/th_gallery/naruto-roadtoninja.
Dive into the past and take a fateful adventure in the latest NARUTO SHIPPUDEN feature film! Long ago, a mysterious masked shinobi unleashed the Nine-Tailed Fox onto the Village Hidden in the Leaves to spread chaos and destruction. But the Fourth Hokage, Minato Namikaze, and his wife Kushina Uzumaki sealed the Tailed Beast into their newborn son, Naruto, to save the village, foiling the shinobi’s plan.
Years later, Naruto and his friends succeed in driving away the infamous Akatsuki, who have mysteriously returned from the dead. Upon returning to the village, the young shinobi are praised by their families for completing a dangerous mission. Reminded of how alone he is, Naruto begins to wonder what it’s like to have parents, when a strange masked figure appears before him – the same masked shinobi responsible for the death of his parents!
The NARUTO SHIPPUDEN feature films are based on the acclaimed NARUTO manga and animated series, following Naruto Uzumaki, who wants to be the best ninja in the land. He’s done well so far, but Naruto knows he must train harder than ever and leaves his village for intense exercises that will push him to his limits. NARUTO SHIPPUDEN begins two and a half years later, when Naruto returns to find that everyone has been promoted up the ninja ranks – except him. Sakura’s a medic ninja, Gaara’s advanced to Kazekage, and Kakashi…well he remains the same. But pride isn’t necessarily becoming of a ninja, especially when Naruto realizes that Sasuke never returned from his search for Orochimaru. Plus, the mysterious Akatsuki organization is still an ever-present danger. As Naruto finds out more about the Akatsuki’s goals, he realizes that nothing in his universe is as it seems. Naruto is finding that he’s older, but will he also prove wiser and stronger?
Additional information on NARUTO and NARUTO SHIPPUDEN is available at www.Naruto.com.
For more information on manga titles available from VIZ Media, please visit www.VIZ.com.
SHARE:
RATE: