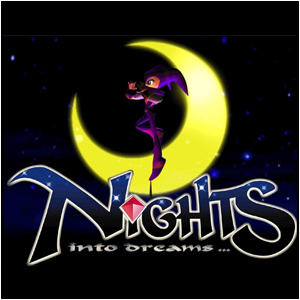 With so many games getting re-releases in the form of HD remakes it was only a matter of time before we seen the revival of one of SEGA Saturn’s most memorable title, “NiGHTS into dreams…“.
Your goal in this game is to take control of Claris, Elliot, and Nights in order to save Nightopia from the the evil ambitions of Wizeman the Wicked who is the ruler Nightmare.
Never owning a Sega Saturn when I was a kid, I only got to play this game from time-to-time when Toys R Us had it on display, but that all changes since it is being released for the Xbox Live Arcade. I am pleased to bring you my review for the HD remake of the SEGA classic “NiGHTS into dreams…“!

When I first saw that NiGHTS into dreams… was going to be coming out, I knew it was a must have for me!  When I was a young kid I remember I wanted a Sega Saturn because this game looked so good, I really loved the jester-like design of the main character they showed on commercials (Nights), and when I played it at Toys R Us it was so addicting that was the only thing I would do in the store.

Heading to the marketplace to purchase the game NiGHTS into dreams… from the Xbox Live Arcade Marketplace, please know that the price will be 800 Microsoft Points and the file size is going to be a whopping 2.01 Gigabytes.  The size is a big large, but you are getting a whole game from Sega Saturn that was not designed with an HD remake in mind (Think about it, games like Devil May Cry and Metal Gear Solid released their remakes on discs, we do not know how big those games are individually but this game is being released on XBLA since it is a stand alone).  After this download completed, I push the jewel in the middle of the Xbox controller and choose to begin the game.

When you start up the game, a loading screen will appear and you will see the familiar NiGHTS clock turning itself while you are waiting.  Next thing you know a seizure warning will appear (Probably because of the colorful worlds of NiGHTS).  After this comes the SEGA logo, but in the fashion it was showed during the  game Bayonetta.  Sonic Team logo comes up with someone saying “Sonic Team” and the sound made when Sonic picks up rings.  Next thing you know, opening cinematic for NiGHTS appears (Featured in the video above).  When it is over I press start, create a new (It has an auto save feature) and I am in the game!

This section will cover the game modes that they have made available and give a brief synopsis in order to help you to understand what goes on when you select it.

Starting up the game takes you to the main menu.  It has some pretty peaceful music (Also has the sounds of what appears to be kids playing?) and has a background which is a looped animation from the game’s opening cinematic, and all the different color Ideyas being shone overhead. You will see several options available to you right from the jump:  Brand New Dreams,  Sega Saturn Dreams, Presents, Achievements, Leaderboards, Help & Options, Exit Game, and  2 “?????” which are the hidden game modes.

Brand New Dreams
This is the classic game NiGHTS into dreams… with a High Definition twist for improved graphics.  You opt to either play as Elliot Edwards and start off in Splash Garden “the AFFECTION” or as Claris Sinclair and start off in Spring Valley “the IDEAL”.  Once you pick either of them a small cinematic with comes with different orbs floating around them (Ideya), before immersing themselves into Nightopia.

As the game starts off you are playing as either Claris or Elliot with a clock chasing behind you in an attempt to wake you up after the minions of Wizeman the Wicked steal all the Ideya you possess except a single red one (Which is the one for courage, that which Wizeman is unable to steal).  From this point and time you have to race through the level by following the arrow to get to Nights before the alarm catches you.

Once you make your way to the place where Nights is waiting called the “Ideya Palace” (Where Wizeman imprisoned him), you transform into him (Or rather, release him) by running through it and you begin to fly through the air doing acrobatic feats in an attempt to collect Ideya and deposit them into an Ideya Capture in order to overload it and make them release the orbs.  You repeat this about 4 times during a single level (They are called “Mares” and have little signs saying the number and “Mare” once you pass them), with the course changing depending on which Mare you are on.  Once all of these are completed you will see a short animation before entering a boss battle.

The boss battle gives you two minutes to defeat him, with time being taken away every time the boss deals damage to you in 5 second increments (Also, you should probably know that their life bar is displayed in the lower left-hand corner of the screen).  Also, note that all bosses will be different and you will have to defeat them differently.  The time it takes to defeat a boss is also tallied with your overall score for that level. You will end up fighting Reala, Jackle, Clawz, Gulpo, Gillwing and Puffy, with the final boss being Wizeman the Wicked.

Once you have completed all 3 levels with Elliot and all 3 levels with Claris and achieved a total ranking of C or better, you will be enabled to play the final stage which is known as “Twin Tails” and be able to go up against Wizeman the Wicked as your ending boss.

SEGA Saturn Dreams
This version of NiGHTS into dreams… is the exact same as the original release on the SEGA Saturn.  It will be everything the HD remastered version is, only without the improved graphics of today’s modern technology.

Presents
This is additional bonus content that we were blessed with for this release of NiGHTS into dreams…  I think this is a nice addition because those who are die hard fans will want to know as much as they possibly can and the more material the better.

They have a gallery to view in game content, including pictures of Elliot, Claris, and Nights.  They have a movie theater which allows you to see the opening sequence, plus a few other additional videos with one talking with the creative producer about how they went about making NiGHTS into dreams… and what their plan was going into making the game.  I think anyone who has spent their time waiting for this release, enjoyed the game when it first debuted on Sega Saturn, and has taken the time to beat this new release of an old classic should most definitely watch it as it gives good insight into all the love and creative vision that went into NiGHTS.

Achievements
This is pretty self-explanatory, but it is all the different achievements that goes with completing certain objectives within NiGHTS into dreams…  In total there are 13 of them adding up for a total of 200 Gamer Score you can add to your Gamer tag.  The one worth the most is “Paralooping” (The process of which you fly around objects in a complete circle to attract them to Nights) Gillwing’s tail in a single hit for 100 GS, while the hardest will probably be clearing all stages with a score of Rank A, with another hard one of achieving a rank of “Dreamy” on a stage (The highest rank you can possibly achieve).  Overall I think the achievements are decent and their weights are distributed rather well (Though, I am not quite sure about giving 100 GS for Paralooping Gill wing’s tail).

Leaderboards
This pretty much are self explanatory as well.  They will give you the highest scores achieved by other games.  They have a filter to see it by level, by your own score, or even your friends score.  Those who really were trying for the highest scores possible on NiGHTS will now have plenty of drive to let their mastery of the game be shown, I always find that this is a good thing to include on a game (Nothing like some friendly competition, right?).

Help & Options
Help and options is further something that we have seen in many games before it.  Help & Options, when selected, further includes other categories such as How to Play, Controls, Settings, and Credits.

How to play basically runs through 17 pages of detailed information on how to play NiGHTS into dreams… by sharing all the movement options, techniques, as well as the basics on how to progress and clear each level.  In additional to this, it also tells the back story behind why Elliot and Claris are helping NiGHTS to battle Nightmaren and take down Wizeman the Wicked.  Controls tells you the button layout, and has two different ones to show you how to control NIGHTS and how to control Claris and Elliot.  Settlings allow you to change your Nightmaren, SS Display Mode, Brightness, Screen Adjustment, Background Music, Sound Effects, Movie Volume, Audio Output, and a Default option (Also, it should be noted that, until you have unlocked the two hidden modes, that SS display mode and Nightmaren options will not be selectable).

I think the help and options are actually pretty good and includes settings that even some of today’s full retail price games are not equipped with.

SEGA has been releasing all of their classics as of recently with this game launching along with Sonic Adventure 2, the release of Jet Set Radio, we are beginning to see huge comebacks of all the games we know and love.   This game is more beautiful than I remembered and the music is just incredibly serene, it is calming and is now among my favorite soundtracks of all time.

The atmosphere of NiGHTS is unlike that of any game I have played.  It is so light-hearted and fun that it is easy to see why, even after so many years of its debut that it is wanted back.  I suggest that everyone buys this game if you want some good, clean hearted fun and experience one of the best games of past generations.  I think every gamer has to play this at least once, I think 800 Microsoft points and 2 GB of memory is a very small price to pay.

Thank you for reading this review of NiGHTS into dreams… Sayonara!