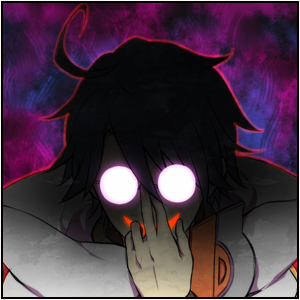 Seems with the popularity of gaming, Massive Multiplayer Online Role-Playing Games (MMORPGs) in particular, that we have began to get an influx of anime within that department.  The last major one that I payed attention to was the much acclaimed romance anime that focused around an MMO, Sword Art Online.  With this one looking promising, I delved into it after some friends suggested that I do so and I managed to completely watch it from beginning to end.

In this review for RoKtheReaper.com, I am going to tell you the basis of this anime and examine whether-or-not it is worth your time to watch and is worthy of the praise it has received.  Go ahead and hit the jump to check out the full, in-depth review for the anime “Log Horizon”. 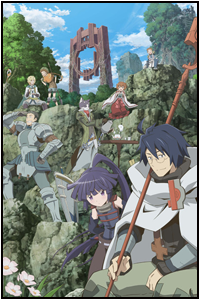 What happens when you suddenly wake up in a world that was not your own?  That is exactly what happened to the gamers who play the Massive Multiplayer Online Role-Playing Game known as “Elder Tale”, suddenly finding out that they were no longer in real life playing the game on their PC’s, rather that they were in the game themselves.  NPC (Non-Playable-Characters) know the gamers as “Adventurers”, immortal fighters sent to save them from the evil denizens that inhabit their world.  Figuring out what happened on the day of the “Apocalypse” is something which need to be figured out to return them to their own world.

Through the brave efforts of all players within the town of “Akihabara”, with Shiroe leading at the forefront with his clan known as “Log Horizon”, they must figure out the rules of this world in order of having the hopes of finding their way back to their own.  However, everything is not as it was when Elder Tale was once a game and that is not their only problem. 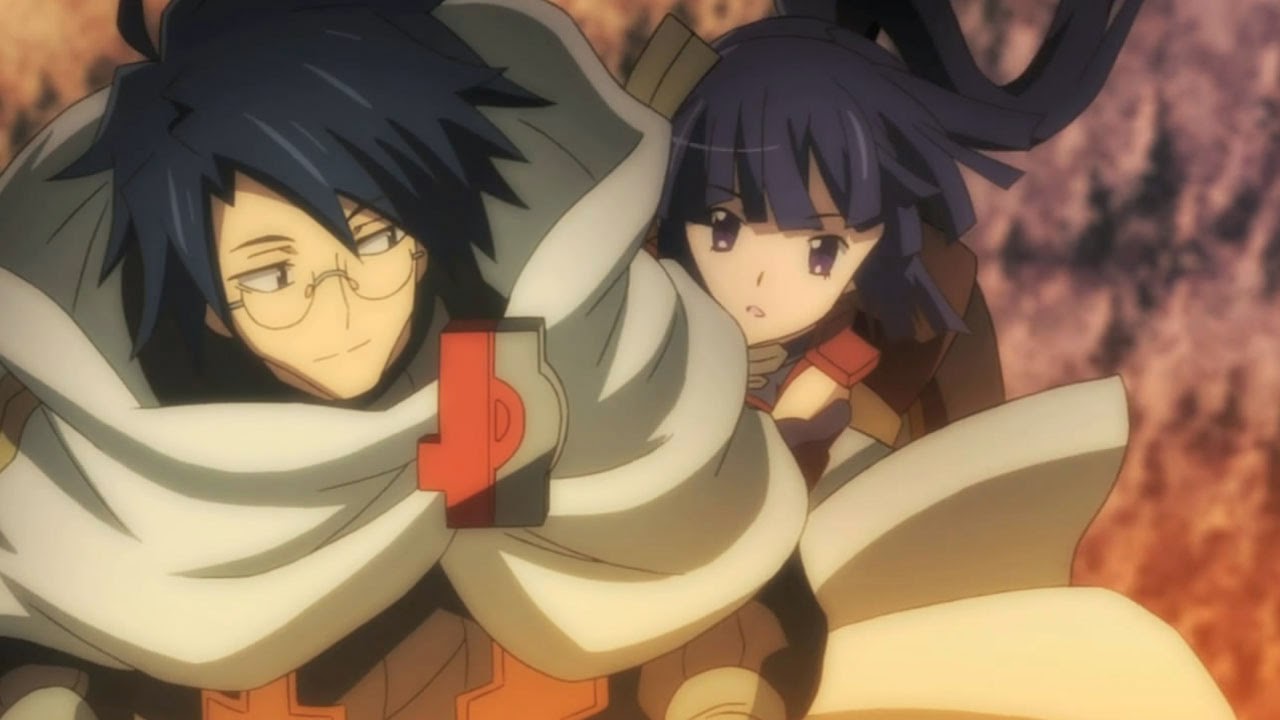 Shiroe, our protagonist, arrives into the MMORPG world of “Elder Tale” and realizes that he is no longer at his PC and is flesh-and-blood in this new world.  Shiroe and other “adventurers” recognize this day as “The Apocalypse”, a day were over 30,000 Japanese players and many others worldwide were logged into Elder Tale and were transported inside of the game.  Pretty soon he meets up with friends that he had in his party when he was merely a player and even those whom he had briefly helped out or aided when they needed him in-game.  This anime focuses on his first days within this new world and how he copes with his new reality, along with everyone else.

The plot of this anime is already I have seen before with Sword Art Online; players unknowingly get trapped inside of a Massively Multiplayer Online Role-Playing Game and have no idea what happened to them.  The big difference between Sword Art Online and Log Horizon within this effect is that the players themselves are trapped within the game and it becomes their actual reality and not that of a video game, this allows for variation and the path this anime chooses to take is an entirely different one than what we have seen before.  In this anime (At least within this season) things are more focused on explaining how the world works and the difference between it as a reality and when Elder Tale was merely a game on the PC.  The thing about those differences is that a few things works exactly like you would expect becasue they have not changed, other things still work the same but are able to be manipulated into greater detail beyond what was present in the game, or it has to be done within a different way to achieve results you would expect in the real world.

As I said in the paragraph above, the main weapon within Log Horizon‘s arsenal is its attention to detail.  This anime explains everything from the way classes work, their specific abilities and focuses, to even what the guilds specialilze in and how to make the most of this new, chaotic world through intense planning and preparation.  Issues revolving around power, fear, and evil caused by lawlessness are addressed as it appears that the absence of an organized government is the cause of primary conflicts between characters.  This anime does have action scenes where adventurers are fighting amongst themselves and creatures of the land, but do not expect them to be very abundant as most of the anime is spent talking and resolving issues while formulating an optimize way to see those plans through.

However, it should be noted that the action scenes that are very well done and often consist of well-planned strategizing and teamwork that really feels like it came from the mind of those who are very wise to the way that an RPG Battle System works (And to survive within it).  Each attack has start-up and cool-downstimes, they talk about things like optimal range for certain special moves and class-types, and whether a class is good for supporting, tanking, or even gathering information.  Explaining the significance of classes inside of battle better helps everyone to know the vast importance when planning out attacks as well as to give an idea of all the roles present to the inhabitants of Elder Tale.

Quite honestly, the story did not have too many flaws because they explained everything out accordingly (Though, the pacing sometimes suffered because of this and it felt slow) and gave subtle hints on things that they did not bother to go into detail about just yet, not to mention they setup plot twists very well (Except for a certain NPC).  This anime also leaves room perfectly for a Season 2 with an agenda already intact, and let me point out that despite not revealing how, why, or exactly how they were brought into Elder Tale, they do explain an incident within their history and what could have contributed the “Apocalypse” (Which is what they call the day when everyone got trapped inside the game).  I can only hope that things will be executed as well as within the first season. 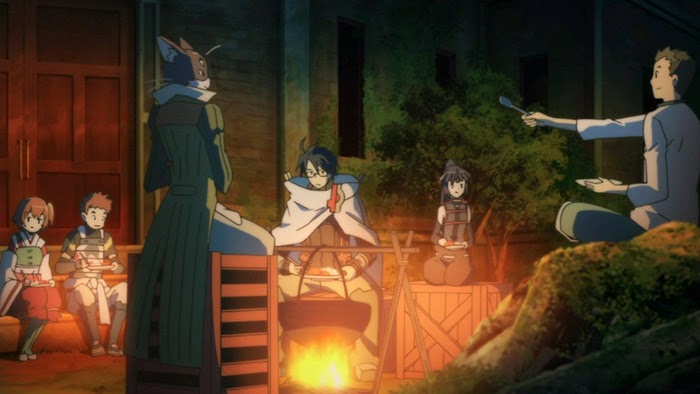 Another strong suit with this series is its characters, I feel a rather unique approach is taken that may not be noticed by those who watch it.  Now, unlike a lot of other anime that have really over-the-top characters or characters that have depth added to them by way of a tragic past or loose ties to their family in which they are struggling to overcome (Naruto, Evangelion, Kyoukai no Kanata, etc.), most of the people within Log Horizon actually seem pretty normal, which is something that is not found within anime too often.  What gives them depth are their reactions to other people and their reactions to certain situations.  A lot can be said just by how people interact with others, their mannerisms and feelings (or lack of) can be easily pointed out due to this.

The growth within the characters are both personal and survival based.  Some characters, such as Shiroe, take into account what is happening with the world and grows by learning more and more about how it works, the factories involved to contribute to its current state, and the best ways to go about handling things in a way that is beneficial to everyone.  Some other characters grow themselves by having a better understanding of their personal role within a plan, organization, or status symbol.  There are even some characters who learn independence of their own from following behind someone and figuring out the meaning of what it means to be strong without the aid of others.  The many different characters each show maturity in one way or the other as time progresses forward, which is a major plus.  On the other hand, I do not like how they did not show the progress of those who do not fit the protagonists role of being “good”.  At the very beginning of the anime a plan is devised to cleanse the town of everyone who is making the new world of Elder Tale miserable for everyone else, nothing is ever said about what becomes of these people and how they go about living their life without being able to access the functions of Akihabara.

Another small thing I want to express is the aesthetics that go along with the character designs.  While everyone’s class was spelled out perfectly with details and everyone is made interesting through the uniqueness of meaningful character interactions, everyone basically looks plain.  Akatsuki is suppose to be super kawaii and she does not appear that way, Shiroe is suppose to look very cool as a White Mage and does not, and Crusty should be powerful looking but does not appear it…but I also suppose that is part of the charm which makes the character development unique in this anime.  By unique, I mean that you learn to love and think a character is cool, cute, or powerful by what they display and the mannerisms in which they think and talk versus how they look or are drawn…makes them more memorable. 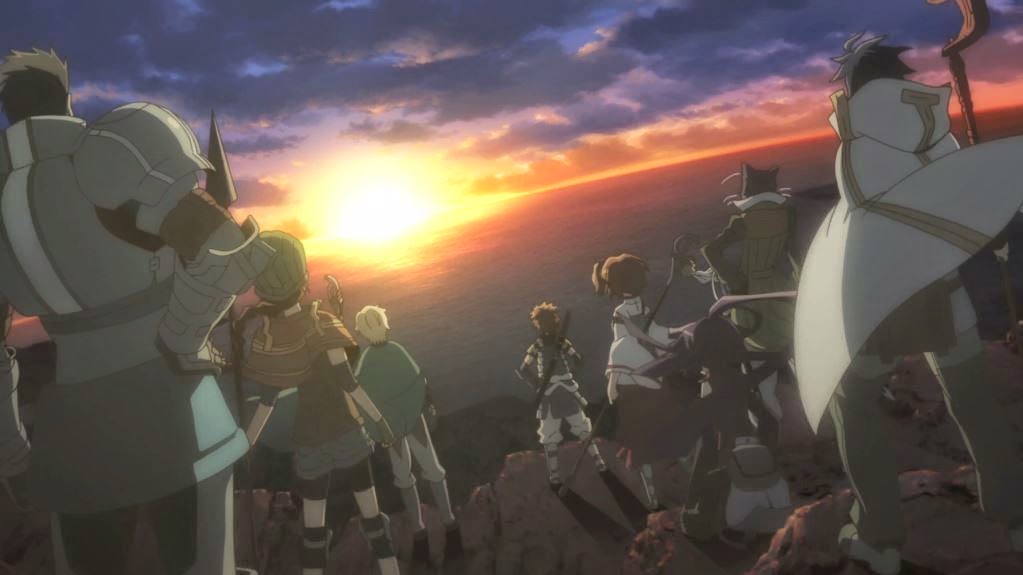 YES! WATCH THIS ANIME!
STRENGTHS   – Very descriptive in  their explanations of Elder Tale’s world and class systems, Good character depth, Feels like a MMORPG world complete with alive NPCs, Plot Twists are NOT predictable, Good setup for a Season 2.
WEAKNESSES   – No “Cool” character designs, Not enough fighting/action scenes, Pacing can feel a bit slow at times.
This anime went above and beyond my expectations, I was not at all thinking that I would get sucked into it as much as I did and now I am hopelessly awaiting the second season.  I immediately thought I was not going to like it because the main character is a support class, a White Mage, and he is unusually tall for someone in anime and he has glasses.  However, his wit proved to be the backbone of this anime and the thinking involved with many of the plots and schemes are very entertaining.  Sure, it did not have as many actions scenes as I was expecting coming fresh from watching Sword Art Online, but the depth and explanation of its world and systems are beyond comparison (I still have no idea what “Switching” meant in SAO).
Trust me when I say that you will not be wasting your time by watching Log Horizon.  Good characters, deep explanations of systems and combat, and excellent character interactions makes for an entertaining anime that allows you to enjoy it while remembering that you do not need an abundant amount of fighting to cause intense and memorable moments.  You are completely missing out if you do not take the time to see what this is all about, you are only cheating yourself out of a good anime.
SHARE:
RATE: