1st Episode Impressions is an article series which focuses on the very first episode of any particular anime.  Mainly whether-or-not it is able to grasp my attention from the very beginning due to the way it introduces itself.  Also, it acts as a comparison point for my final review of that anime or season.

Keeping up with my recent string of anime, Momokuri is next on my list.  Supposedly about the budding romantic relationship between Yuki Kurihara and Shinya Momotsuki, with the main focus being how each deals with the other. 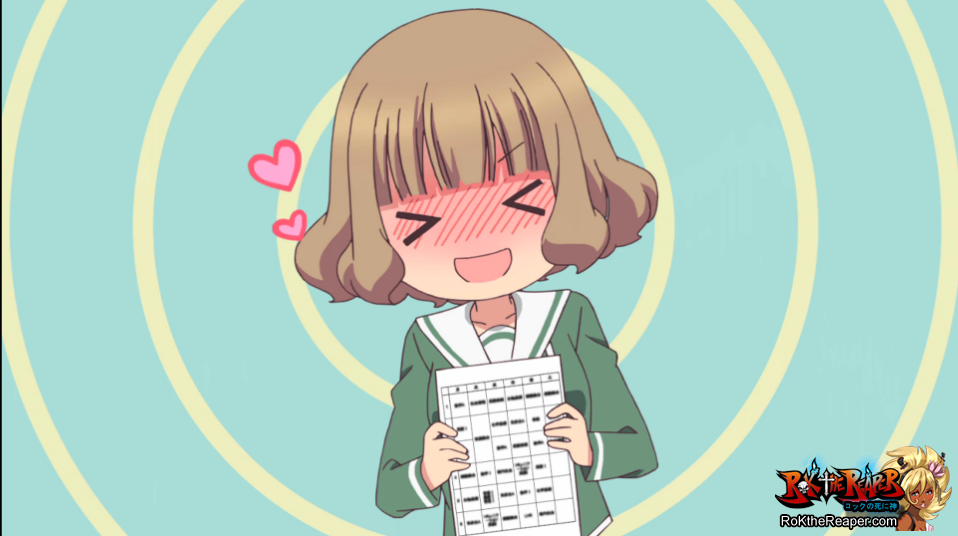 The name of this anime “Momokuri” seems to be the fusion of the last name of the two main characters (Momotsuki and Kurihara, respectively).  Also, while it is true that both of them share the spotlight, it does seem more-or-less than Kurihara is the main focus due to her being the one to actually confess her feelings for Momo-kun after obtaining her insane goal of “100 pictures” of him in her phone’s picture folder she lovingly named after the eye of her affections.
Kurihara seems as though she is just an average girl, however, she is head-over-heels for Momo after seeing his personality in motion during his gym class.  She is infatuated with him to the point she is pretty much stalking him; taking pictures when he is not paying attention, spying on him while he is in class, and even patiently waiting during his walking route so she can “coincidentally” bump into him.  While this is something that is normally the beginning of a very yandere relationship, it is understandable here because it is Yuki’s first time ever falling in love with a boy.  I believe that everyone, at some point, are infatuated with the person whom they have a crush on, maybe not to this extent, but they can certainly understand the sentiment.
Momotsuki (known mostly by everyone by his nickname, “Momo-kun”) is a boy who is shorter than average and is just now making his debut into high school as a first year.  He happens to be on the receiving end of Kurihara’s affections and graciously accepts her confession to officially enter into a relationship with her.  However, he is having difficulty understanding how to get closer to her.  Shinya likes her nonetheless and believes her to be equally as cute.
This anime in itself is something that is very cute overall.  The expression caused by the female protagonist are adorable, as well as how she is fawning all over Momo-kun every single chance that she gets.  Her friend is there to slap her back to reality when she does weird things, such as wanting to keep the straw he was drinking strawberry milk out of (even wanting to sniff it!).  I am appreciative that Yuki’s friend makes sure to call her out on her weird behavior, as it is something that would be seen as outlandish by most people. Momo-kun is a typical boy who has also never had a girlfriend, so we get to see how he is just as nervous as she is when it comes to being in a relationship, as it is unfamiliar territory.  I love her they show him caring her within his own way, such as not wanting to share an umbrella with her initially out of fear of her being so cute, as well as making him just as willing to communicate with her as she is with him.
Overall, this anime has a very nice beginning thus far (though to be honest, I watched the first two episodes as they were combined on Crunchyroll before writing this; so it is technically the first two episode impression!).  I can see myself watching it to its entirety and see what antics play out.  However, due to them being so head-over-heels for each other so far, it will be hard for me to figure out how they could possibly deepen it.  There is always a chance of conflict since Momotsuki does not know that Kurihara follows him, though he does have a good idea she might be setting up all of those “coincidental” meetings purposely.  Nothing to do now but to check out the rest of the series as it shows up and see what they have in store for us next!
SHARE:
RATE:

Fortnite: Battle Royale — Thoughts on the Boom Box
Bidding Adieu! Marvel vs Capcom 3: Fate of Two Worlds
Xbox One to Offer $399 Option, Does Not Include Kinect 2.0