WAGNARIA!!2 Complete Second Series Standard Edition is going to release in North America on June 23rd.  For those of you who do not know, Wagnaria is a slice of life comedy that continues the antics of the family restaurant staff of Wagnaria.  This release is going to be on a 2-disc Blu-ray set with lots of on-disc bonus features!
Go ahead and hit the jump to catch the full release!
WAGNARIA!!2 Second Series – Official Trailer
Standard Edition Details 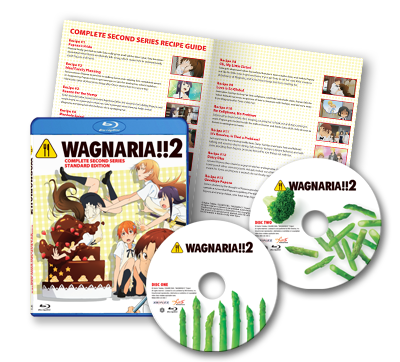 The WAGNARIA!!2 Complete Second Series Standard Edition will retail for $54.99.  It will release on June 23rd, 2015 in North America.  The age rating for the series is “Teen”.  The series will be released in a 2-disc Blu-Ray set.  Your language options include Japanese audio with English subtitles.  The length is 312 minutes ( 5 hours and 12 minutes) across 13 episodes.
The Item # for this product is WNA2-BRD-US-SE with the UPC being 813633015927.
SHARE:
RATE: