We got quite a surprise during the always informational “Nintendo Direct” which took place yesterday on April 1st.  We found out that the DLC character Mewtwo will be available to download in two weeks for Super Smash Bros. for Wii U & 3DS while we will be getting Lucas in June (Lucas is from “Mother” the same game as Ness, he made his debut in Brawl).  However, the most significant thing in my opinion is the fact that we have the ability to possibly get the characters we want the most in by use of fan voting.  This is huge and gives me an opportunity to bring my voice straight to Nintendo.
My vote is going to go towards none other than “Sami” ( ドミノ or Domino in Japan), the lovely female Commanding Officer of the Orange Star Army in the game “Advance Wars” for Game Boy Advance ( Known as “ゲームボーイウォーズアドバンス” or “Game Boy Wars Advance” in Japan).  I feel she would be a perfect fit and be right at home among the other combatants.  Besides, I also feel like we need more diverse female combatants and ones with actual combatant experience (especially since I usually main female characters in fighting games but had not had ones to fit my fancy in Smash).
Hit the jump to catch why I am voting for Sami.

My History with Advance Wars 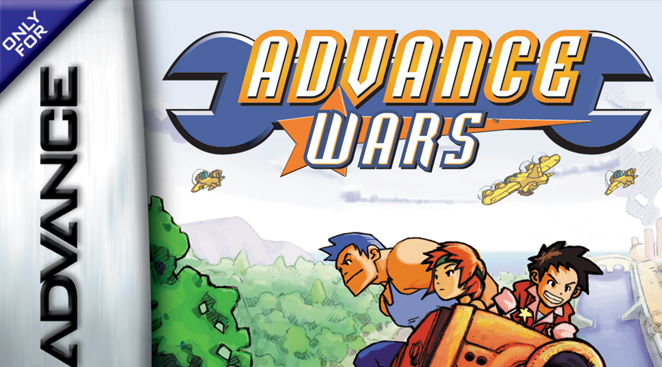 Before I get to even talking about Sami, let me talk a bit about the game she is from, Advance Wars, and my history with it..  This game debuted in 2001 here in North America.  This game is the 5th highest rated game on Metacritic right now for the Game Boy Advance with a 92, having no negative reviews by either critics nor users.  There are currently 12 games in the “Wars” series, the first starting off in 1988 with the game “Famicon Wars” for the Nintendo Entertainment System (only available in Japan).  The game that Sami is from, Advance Wars, is the 7th game in the “Wars” series and the first to be released outside of Japan.
I first picked up Advance Wars when I was in the 8th grade, it just looked like a pretty fun game and I needed something to help me kill time with.  I had never played a tactical war-based game, but I figured it might be good to give it a shot.  I was completely blown away by the opening cinematic and the graphics that the game had on its main menu.  I was also intrigued by the fact it had a crazy in-depth tutorial that you went through that delivered a lot of need-to-know information without feeling overbearing; they even had a really cute CO named Nell to help you out!

I began to play this game constantly.  Whenever I got a break I was trying to go through the campaign or just playing casually against computers with conditions I would set up.  It got to the point I even bought a “MADCATZ 12310 MAD Light and Screen Magnifier” just so I could play it at night time (the Game Boy Advance did not have back-lighting, remember?).  It was even to the point that during my 8th grade field trip all my and my best friend did was eat the food our mother’s had packed for us, use our money to buy soda, and play Advance Wars the entire day while ignoring the other activities.

Needless to say, this game has a special place in my art compared to any other Game Boy Advance game, and the only other game that comes somewhat close to it in fun factor was Megaman Zero.  Even so, I rate Advance Wars for the Game Boy Advance as my favorite GBA title of all-time.

Why My Vote’s For Sami 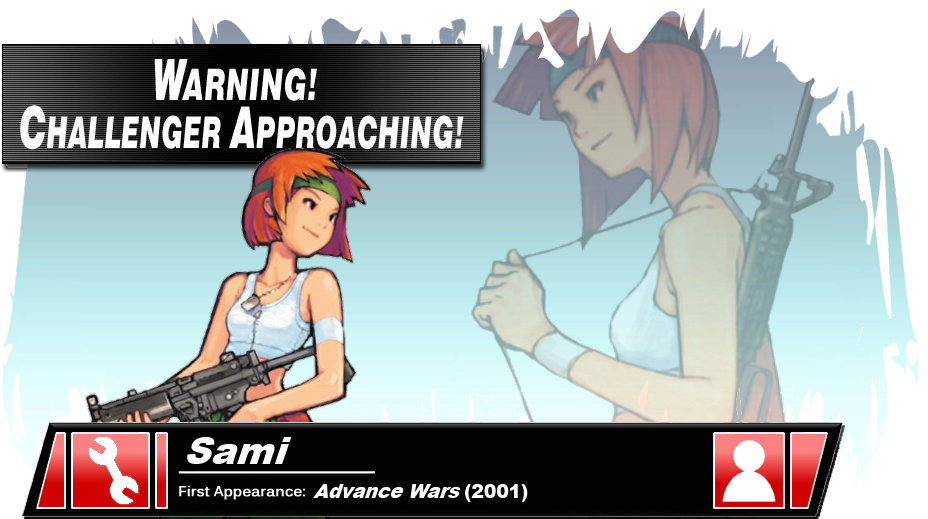 Sami is one of the Commander Officers in the Orange Star Army.  She is, specifically speaking, an infantry specialist (which is why her CO power is aimed specifically at them).  Even though she made her debut in Advanced Wars, she has also appeared in Advance Wars 2: Black Hole Rising and Advance Wars: Dual Strike.  She also seemed to be skilled with an assortment of guns, with her official art showcasing her carrying submachine gun, assault rifle, and light-machine guns.
Sami’s position within the army assumes that she has worked her way up through the ranks to her current standing as Commanding Officer.  Unlike she seemed to be specialized in hand-to-hand fighting and close-range guerrilla combat due to the fact that her CO Power is specialized for infantry soldiers.  It is easy enough to assume that she is the toughest in a one-on-one fight out of the other two CO’s present in the original Advance Wars, since Max’s CO Power is only good for Tanks and Andy is more-or-less a mechanic without direct combat involvement.  We already know what types of training and skills a soldier has to possess, thus we can assume t hat Sami is above average in all of these categories if she was placed as the head of so many other officers.  Sami’s involvement in Super Smash Bros. for Nintendo Wii U & 3DS seems to make a ton of sense since she is actually combat ready and has experienced real fighting.
Another good reason for Sami to be included in the Super Smash Bros. for WII U & 3DS Downloadable Content plan is the simple fact that more female competitors with actual fighting knowledge is needed.  Among the ranks right now, we only really have Samus Aran and Lucina.  There are other we could technically say fit the bill, such a Palutena or Zelda (Shiek transformation), but they are really support characters you cannot use (Plus we have never really seen Shiek fight anyone).  Sami defies a lot of stereotypes by wearing clothing that is actually fit for combat and having the skills enough to train and lead infantry into life-or-death battles.
Solid Snake, the last army-esque character to grace Super Smash Bros. did not come back after his debut in Super Smash Bros. Brawl, Sami would be an excellent choice to replace him.  Sami could have moves that take notes from Snake’s move set while adding in original concepts for a similar yet fresh arsenal.  Compared to Lucina who is more-or-less a copy of Marth’s fighting style with different properties, she can actually be viewed as an altered take of an established concept.  Of course she should have projectiles since she specializes in weaponry, but having her fight with a reverse-gripped knife or having mostly close-ranged lethal moves would make her stand out from a lot of the cast.

Nintendo can do it and I feel like she deserves a chance.  A franchise that they have had since 1988 has not made its way into one of the most iconic series Nintendo has to date, I feel it is only time that we give Sami and the Wars series its due.