Sleeper Simulant is a exotic heavy weapon, the only difference that makes it unique is that it is a FUSION RIFLE.  What’s so crazy that this fusion rifle has to be in the heavy weapon’s slot?!  Well, I recent found out that Bungie was about to let the cat out of the bag and allow everyone to finally lay their grubby hands on it, and you know I had to be one of the first ones to get my foot in the door.
After collecting four golden age relics, multiple specific missions, rebuilding the core and waiting a day for it to be returned by the gunsmith… I was ready to do the final strike in order to obtain it.  Sleeper Simulant is now finally mine, and here are my impressions. 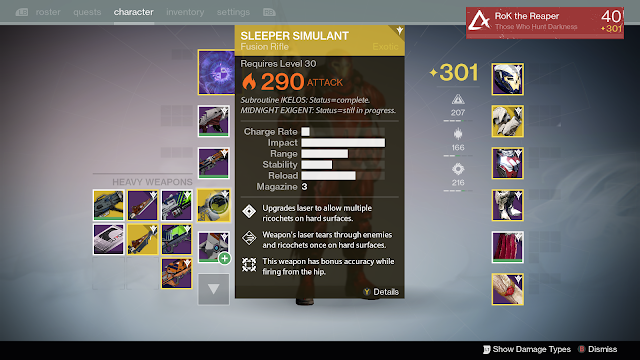 Sleeper Simulant being the first exotic heavy I have gotten in this game is very important to me.  I am someone that loves heavy weapons in Destiny, mostly because I have the titan exotic arms known as “Ruin Wings” which allow me to get higher than usual heavy ammo drops with increased ammunition within every pack.  This means that I am able to deliver massive damage to bosses or clear out hordes of lesser enemies, freeing up my teammates and lessening the burden on everyone.
Sleeper Stimulant seems pretty good starting off.  It has pretty good range, it has perks to increase stability, and it says that it will be able to ricochet off of walls multiple times to hit multiple enemies (reminds me of Hard Light’s effect).  I wanted to hurry up and see what this weapon was about, so I quickly made it level up by using Motes of Light to increase its weapon experience to finish it quickly.  I also got the spare weapon parts I needed by dismantling legendary weapons from Year 1 that I was not going to be needing anymore (mostly auto rifles).  Once I fully leveled up my weapon, I thought it was a good time to test it.

I went with a couple of friends to the daily story mission, and I was  very disappointed by what I saw with the Sleeper Simulant.  It took two head shots (this fusion rifle does precision damage) in order to kill a Ultra Hive Knight, and it shot so fast that you could hardly tell where the ricochet went, but I know that it did not kill anything else (kind of like how no one ever gets hit by Hard Light’s ricochet).  Not only that, but you also only had seven maximum ammo clips in the mag and it can only chamber 3 of those rounds (even if you have on armor which increases the amount of fusion rifle ammo, it still does not do anything).

I feel like Sleeper Simulant in its “current state(?)” (more on this prediction later) is pretty, but it does not live up to what we had to do in order to get it.  It is a lackluster heavy weapon at best and I have even heard people compare it to the Year 1 Nechrocasm in a sense for the all work needed to obtain it and the failure to live up to its promise.  In order to actually make it a decent weapon for now, they would either need to heighten the precision damage (while boosting its stability), allow the ricochet to seek enemies, or allow it to keep more ammo in reserve (at least 3 full reloads, so 9 rounds instead of 7).  Unfortunately, if this is the end result we have waited and played for nothing…but I do not believe that is the case.  The only real benefit I can see to having this gun is a one shot weapon that does (probably) more damage than a sniper.  This would make it easier to wreck bosses when using it in combination with a Nightstalker Hunter’s tether or a Defender Titan’s Weapon of Light (essentially replacing the need to have a Gunslinger Hunter with Nighthawk helmet on standby).
[   Speculation   ] 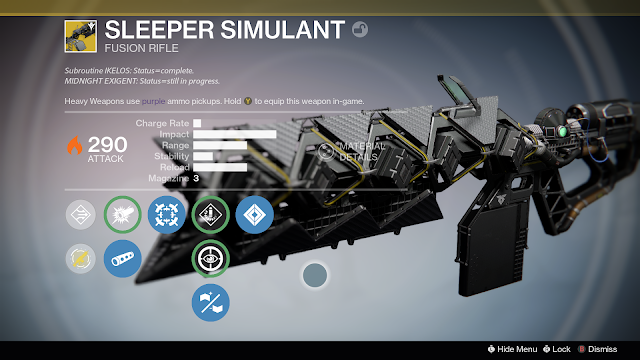 When you actually look at the flavor text that they gave for Sleeper Simulant, it says “Subroutine IKELOS: Status=complete.  MIDNIGHT EXIGENT: Status=still in progress.”  My guess is that this means that there might be another part to Sleeper Stimulant.  One that makes this gun worthwhile and not merely something that players will feel is a lackluster reward for going through so many steps.  I am also speculating that if this is the case, we will see something to transform this gun in the hard version of the “King’s Fall” raid, kind of like Nechrocasm.