Bianca recently completed an anime named Charlotte and I figured that it might be a good time to give it a try, especially since I am looking for recent anime to watch and review for RoKtheReaper.com and Genki Life Magazine (to which I am a contributor).
The first episode starts off very interesting with a boy whom can possess anyone within his line of sight…but only for five seconds.  However, he finds a way to use his powers to his advantage…but it all catches up with him in the end.  Check out my full impressions after the jump!
[   1st Episode Impressions   ] 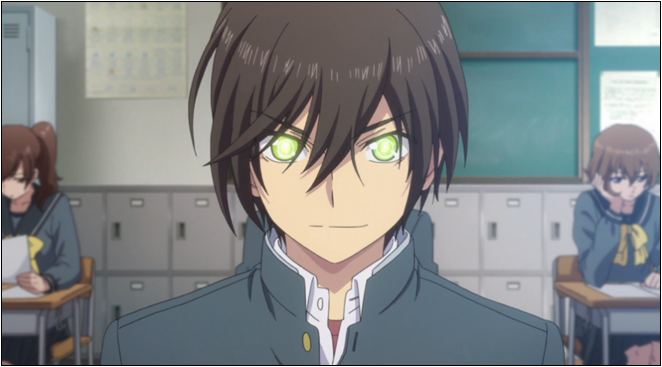 Yu Otosaka is a boy who lives with his little sister (whom admires him greatly).  His uncle takes care of him and he has no connection to his mother nor father, not wanting to acknowledge them.  This seems like a typical story, but something much bigger comes to the picture. The biggest secret to Yu (our seeming protagonist) is that he is gifted with special powers; able to possess anyone within his line of sight, taking over their body and controlling their actions without their knowledge nor consent…but he is only able to do this in 5 second increments and his body goes completely limp and unconscious while he does it.  Despite the drawbacks and limitation on his power, he is able to make use of it in day-to-day mischief (such as taking over a girl’s body to view her breasts or to cause someone to pick a fight with someone else).  However, he finds the true knack for his gifts by taking over the body of the smartest students within his class to copy their answers, allowing for him to get perfect scores without having to study or put forth effort.
It was not long until Yu enters into a prestigious high school as the top person within his grade, giving a speech during their opening ceremony and maintaining the top spot.  Being adored for his attractive appearance, genius intellect, and seemingly kind personality, he lives the social life he has dreamed of.  Otosaka even masterminded saving a female student whom he had his eye on so that he had a reason to interact with her and begins to mold the situation to make her his girlfriend.
Yu’s personality is completely that of an anti-hero.  He reminds me of characters like Dio Brando from Jojo’s Bizarre Adventure and Yagami Light from Death Note.  Seems as though he will do anything to get what he wants, and he does not even consider the repercussions of his actions because he lives in the moment. Fame, glory, girls, it seems these are the only thing on his agenda and he does not have any moral constraints to bind him to doing things the hard, earnest way.  This makes for a self-centered, egotistical protagonist who will have loads of room for character development later on down the line (probably to someone who is more compassionate and cares for others).
Later on down the line when his powers get him in trouble later on in the episode, we find out that he is being recruited by others with special abilities.  However, the thing that seems most impressive is that everyone’s power has some sort of noticeable flaw which makes it feel imperfect.  An example of this would be someone who runs incredibly fast but has no ability to control where he will end up, so he crashes into things.  Another example is someone’s who has the ability to turn completely invisible, but they are only able to become that way to one person at a time while all others see them as they are.  Everyone has truly miraculous gifts but they possess a remarkable downside which means that those who posses them must be smart and creative with how they are used.  I believe this spin on things will create interesting situations because it means that intricate plans must come about in order to make full use of everyone’s abilities.

To be perfectly honest, him having to move to a special school designed for people with powers like his own kind of reminds me of the X-Men comic by Marvel; how there is a school for the “talented and gifted”, but it is really a place for people with powers.  Since it ends with him and his sister moving into a new complex in order to be closer to the new school he will attend, and those whom recruited him coming and helping him with the move-in, it will be interesting to see how he functions within an environment where everyone around him is as “special” as he is.

This opening episode was very good.  It gave you a look into the main character’s personality, defined the world and characters that they live in, and gave the viewership something to look forward to in the next episode.